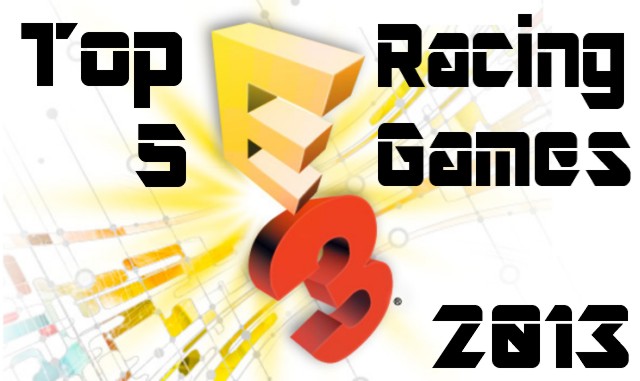 The global video game industry has made its annual pilgrimage to the Los Angeles Convention Center for the Electronic Entertainment Expo (E3 to its friends) and, as always, there were plenty of buzz-surrounded world premieres and debuts. This year’s show is especially big for hardware buffs, as Sony and Microsoft are rolling out the Playstation 4 and Xbox One, respectively, as well as the game lineups for these new consoles.

And speaking of games, there are many noteworthy racing and driving games being revealed (or additional info about them being revealed) next-door to Staples Center. But here are the five that we’re most looking forward to playing in the next year or so.

Sony and Polyphony Digital already revealed Gran Turismo 6 at a special event last month, but E3 sees the release of a second trailer for this Playstation 3 (yes, PS3) title. Not much in the way of new details (technical- or gameplay-related) were announced, but some new cars and tracks were. In the former group, we find the BMW Z4 GT3 racecar (which forms the basis for this year’s Rahal-Letterman-Lanigan Racing prepared American Le Mans Series GT entrant), and the radical Nissan DeltaWing. In the latter group, there’s confirmation of SoCal’s own Willow Springs International Raceway, and a fictional road course set in the shadow of the Matterhorn (the actual Swiss mountain, not the Disneyland ride). Oh, and it looks at least as gorgeous as any Playstation 4 or Xbox One racing game we’ve seen so far.

Unlike Sony, Microsoft is putting the next installment of its first-party racing sim on its new console. However, like Gran Turismo 6, the makers of Forza Motorsport 5 – Turn 10 Studios – didn’t reveal much in the way of new cars or tracks (In fact, the fictional Prague street circuit from last month’s first trailer remains the only track to have been made public.). But there were some tasty nuggets of new information revealed, mostly having to do with cloud computing, which FM5 will be able to utilize thanks to the Xbox One’s controversial always-online design. The most fascinating of these is the revival of the original Forza Motorsport’s Driveatar function; it learns your driving style, and implements that to compete (and win in-game prizes) on your behalf, even when you aren’t playing. Neat.

Ubisoft is well known as the maker of top-notch kid-friendly platformers and gritty, sneak-around-and-snap-bad-guys’-necks action games for grown-ups. Now it wants toadd driving games to its repertoire with an all-new offering called The Crew. Set in a shrunken (but still incredibly vast, i.e. thousands of virtual square miles) Continental United States, this open-world driving game (set for release on PC, PS4 and Xbox One) sees you competing in races and tackling challenges in a wide variety of highly-customizable (Five words: Rally raid first-gen Camaro.) licensed cars and trucks from the likes of Chevrolet, Ford, Nissan and Ruf. But this is hardly a lone-wolf game; there’s a huge emphasis on cooperative online play, with you and your buddies battling other teams for bragging rights. Bottom line: The Crew looks to be part Test Drive Unlimited, part Cannonball Run, part West Side Story, and all awesome.

It wouldn’t be an E3 without a new chapter in the Need for Speed canon being revealed, right? Right. Need for Speed: Rivals combines the intense cops vs. racers action of 2010’s Need for Speed: Hot Pursuit with the in-depth stat-tracking and multiplayer functionality of last year’s Need for Speed: Most Wanted to create a beefy new title due for PC and the current and next generation consoles from both Sony and Microsoft this November. Oh, and it’s the first NFS title in almost a decade to ship with vehicles from Ferrari, with the F12berlinetta seeming to have top billing.

Finally, one of the longest-running and best-selling racing game series on Nintendo consoles has been, unsurprisingly, Mario Kart. Nintendo used E3 to announce the latest entry in the series (and the first on the Wii U), Mario Kart 8. But this isn’t just any ol’ Mario Kart with modern graphics; rather, the karts (and motorcycles!) are fitted with an antigravity mode that allows players to drive on walls and ceilings of the whimsical tracks, as well as retractable hang gliders to allow you to jump farther than you otherwise could. As usual, there will be a whole host of beloved Nintendo characters like Mario, Yoshi, Donkey Kong, Kirby and more to choose from when Mario Kart 8 hits stores next spring.