Ducati Monster 1100 By Christian Audigier Is A Nightmare 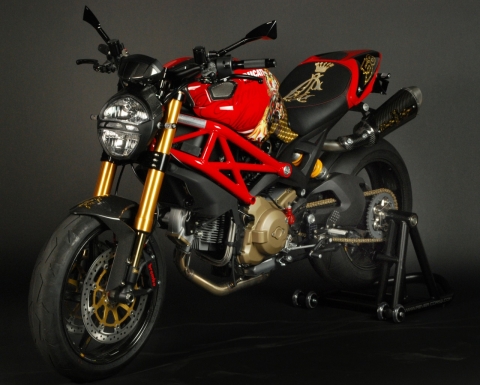 Anyway, not only has he been tearing up the fashion scene but has more recently been getting into motorsports (to our horror). The last time we came across one of his creations was the Lamborghini Murcielago LP 710 Audigier. That was bad enough, but his work has started an infection that is beginning to spread with copycats like the Unique Sportscars Ferrari F430 Calavera hitting the market. 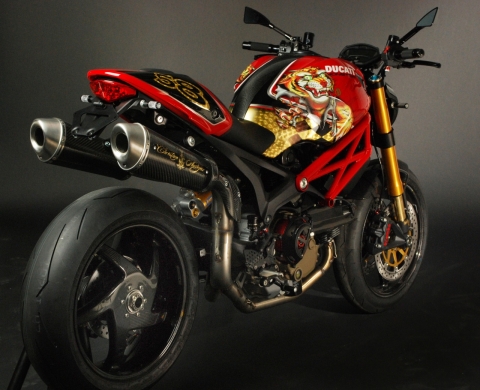 Now he has turned his attention to another legendary Italian outfit, Ducati, in an attempt to deface the high-end motorcycle market. His victim, the Ducati 1100 Monster, is one of my all-time favorite bikes. It’s bad enough that there are two garish tigers springing from the gas tank, but the bike is accented with some gold foil-type paint that seems to be used in all the wrong places. Does this motorcycle really need some crazy embroidery on the seat to chaf your ass? And why destroy a carbon-fiber exhaust system with a bolt-on gold plated name badge?

I have to stop talking trash about the graphical scourge and focus on what’s really cool, the bike itself. The Ducati Monster 1100 is the bigger brother of the 696, with the new single-sided swingarm being the dead-giveaway. It sports an air-cooled 1100cc v-twin motor good for 95 horsepower and 79.5 lb-ft of torque. This new Monster weighs in at 372 pounds, which is pretty svelte for a liter-class naked bike.

So, what’s the charge for this blight on the motorcycle landscape? Oh, just $55,000, about $42,000 over the base list price of the Ducati Monster 1100. That said, sans all of the junk strewn all over the bike, the mechanics are pretty phenomenal and are definite upgrades over the stock model.

Maybe Rever Corsa will offer the same bike but without the Christian Audigier graphics? These guys know Ducati bikes inside and out and are one of the best tuning operations in the industry. So, it never hurts to ask, right?