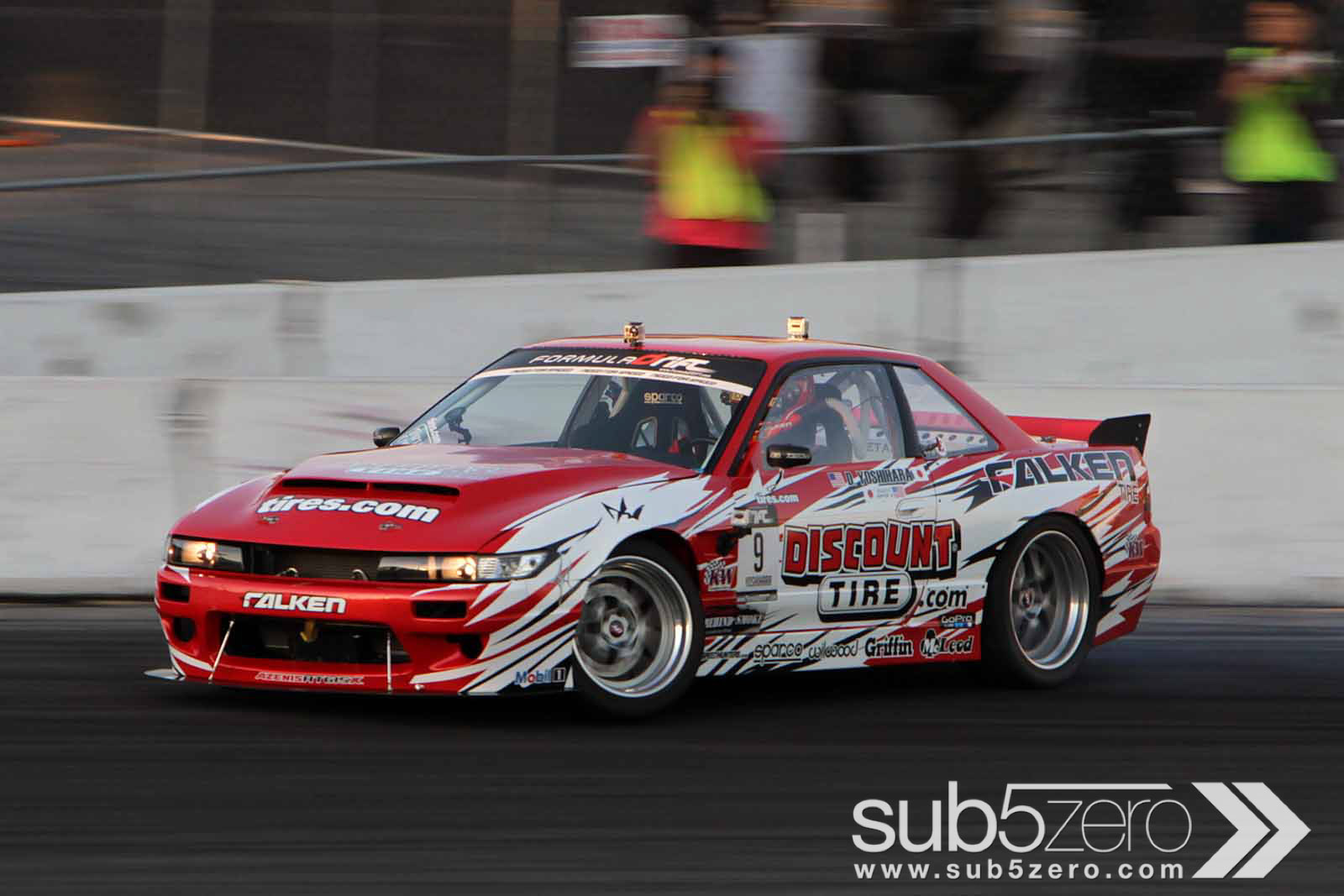 After a very compact 6 month series, Formula Drift's season finale, the Title Fight, took place at Toyota Speedway at Irwindale, where not only the Round was on the line but the overall Championship as well. After qualification runs on Friday without much fanfare, the field of the Top 32 drivers was established. But the main event took place on Saturday to a sold out crowd and absolutely jam packed race track. Extra bleachers were even added last minute to make room for what was actually the largest Formula Drift event ever!

This year's Championship title race was also one of the tightest ever, with just 12.75 points separating leader Daijiro Toshihara and Justin Pawlak going into Round 7. To make things even more interesting both drivers are part of the same Falken Tire team and, based on the point totals, there were five drivers all in the running for the overall title. 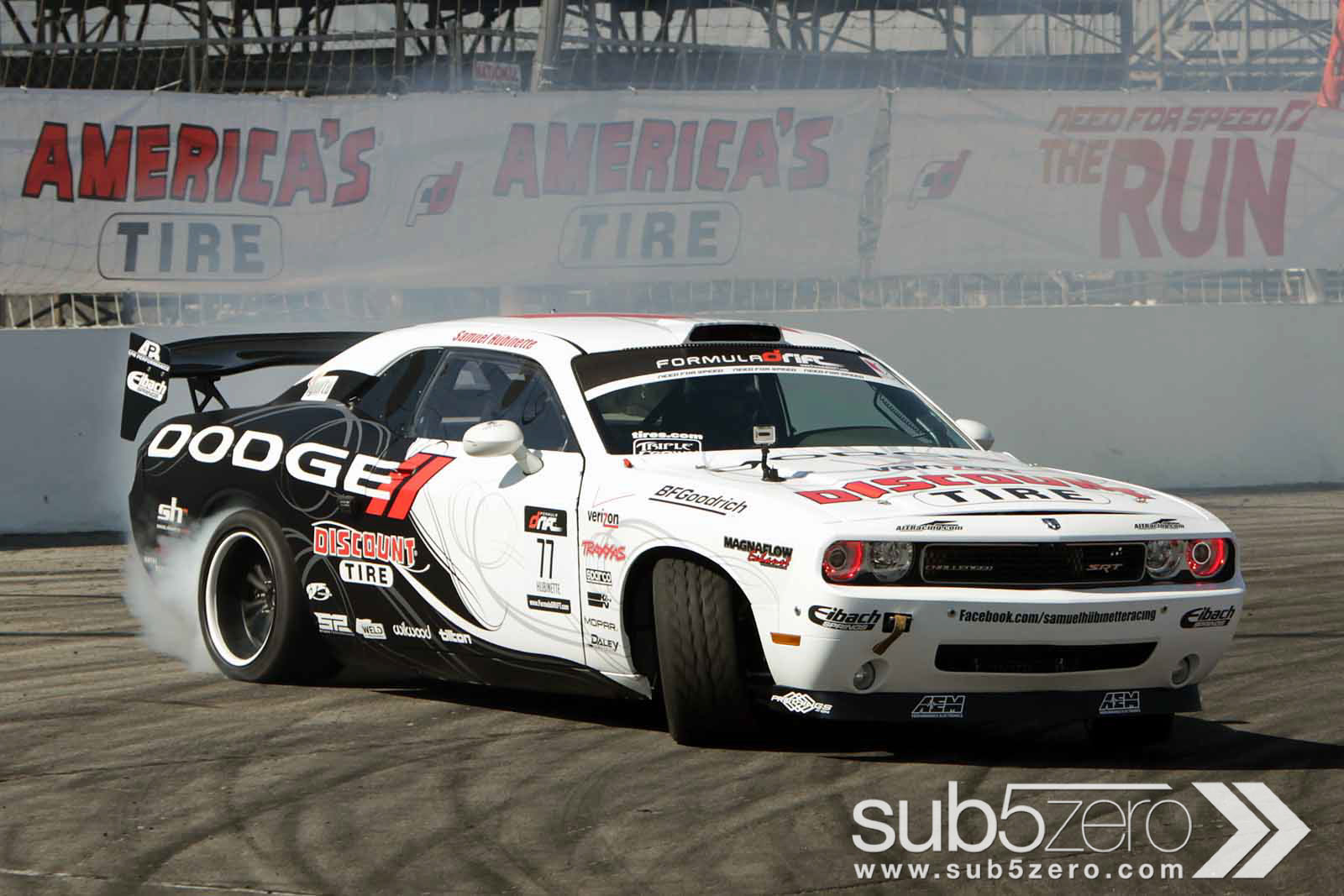 After 8 years of being a strong finisher but without capturing the title, it looked like Yoshihara lost his golden opportunity to Pawlak when he succumbed to Ken Gushi in the Top 16 round. But in the next round, Pawlak's Falken Tire Ford Mustang clipped the wall during his run and lost out to Darren McNamara's Falken Tire Saturn Sky. When all the points were tallied up, Yoshihara managed to slide by with just 5.75 ticks, the closest finish ever in FD history! 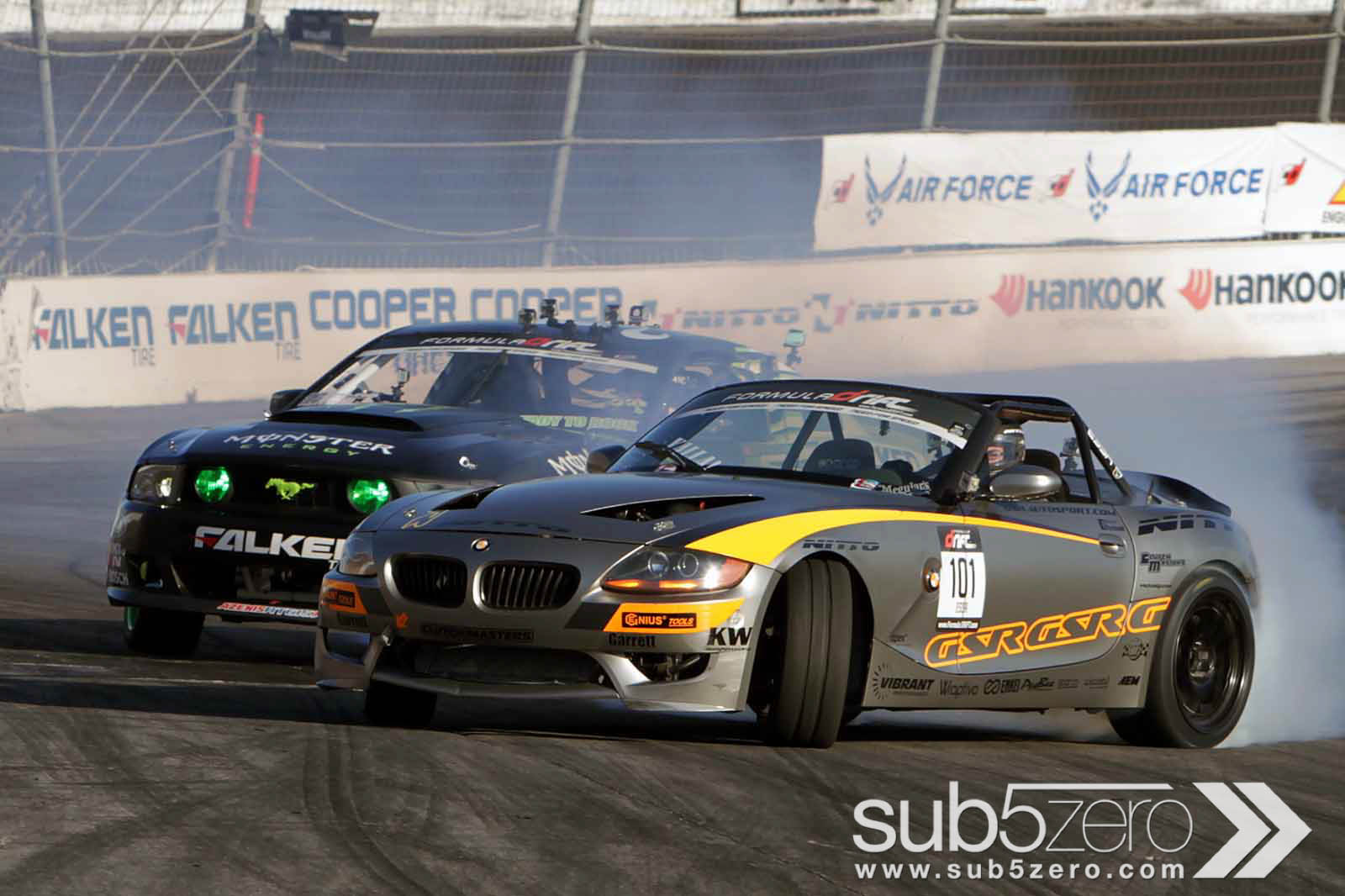 Chris Forsberg in the NOS Energy Drink / Hankook Nissan 370Z went on to take down Darren McNamara and capture third place in the event and also third place in the overall championship. The final showdown, which ran late into Saturday night, saw Rhys Millen in his Redbull / Hankook Hyundai Genesis Coupe running against Tyler McQuarrie in his Falken Tire V8 350Z. Millen was a tough competitor, just coming off his recent top podium finish in Round 6, but McQuarrie took the win for the event and finished 5th overall. 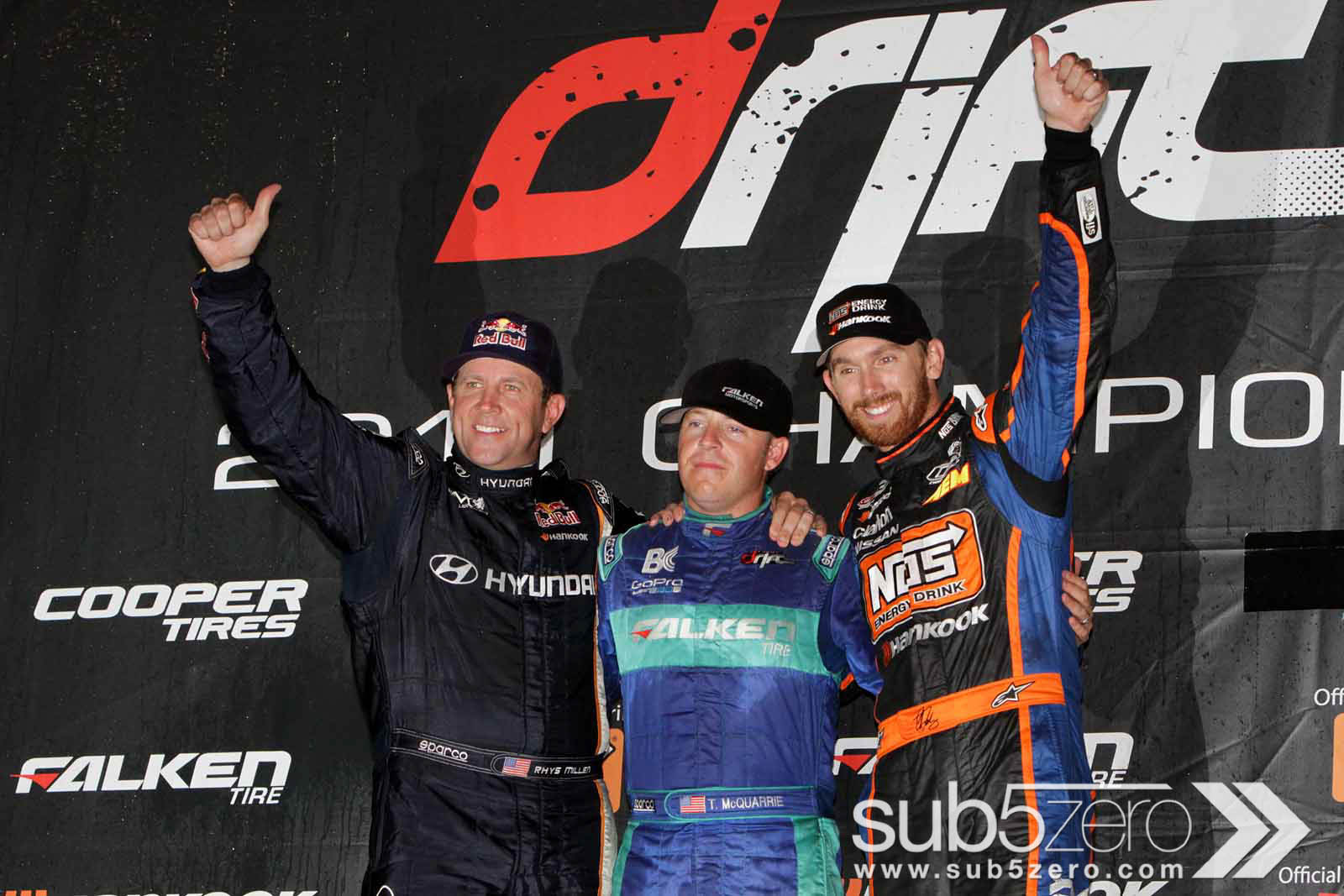 At the end of the night, driver Daijiro Yoshihara was “Triple Crowned” as the 2011 Formula D Series Champion. Interestingly enough, for a sport with Japanese origins, this is the first time that a Japanese driver claimed a season victory. It's also important to note that he did so with his Discount Tire / Falken Tire Nissan S13 chassis, which is an iconic platform that has been eclipsed in Formula Drift by new models with much more advanced technology. This is truly a testament to Yoshihara's driving chops and gritty determination. Overall, this was a great event, an amazing season and we can't wait to see what 2012 has in store! 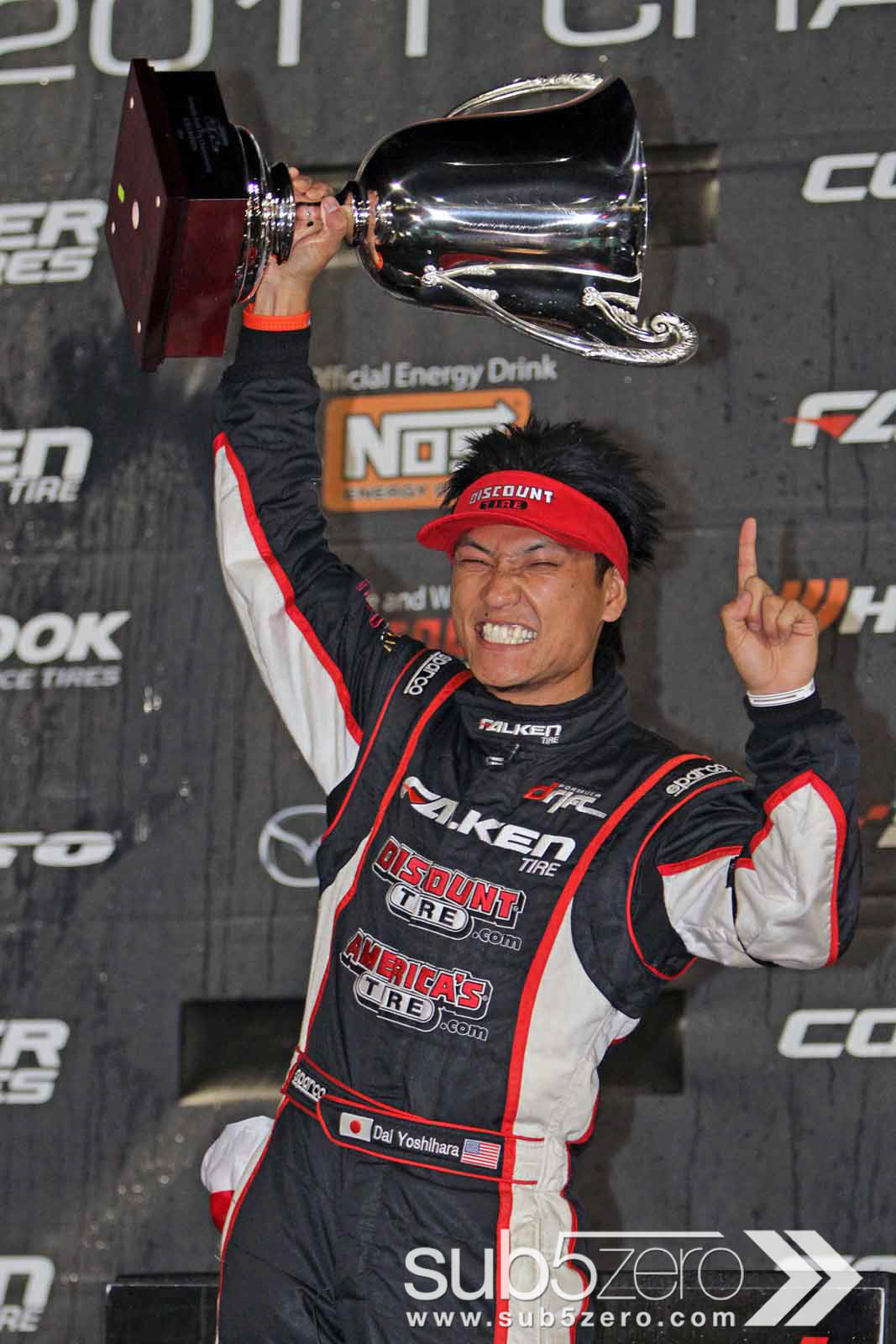 And now for a little history…

In the States, drifting started off as an underground phenomenon 10 years ago and has only recently become truly mainstream. In 2003, Slipstream Global Marketing provided a drifting showcase at Irwindale Speedway in SoCal with some of the top Japanese drivers. Later that year, Formula DRIFT was officially founded. The first Formula D competition was held in 2004 at Road Atlanta as part of a four-event circuit. It's interesting to note that Formula DRIFT has more tire manufacturers involved than any other motor sport event in the world. And after watching a showdown, with tires smoking from start to finish, you can plainly see why!

Drifting involves tremendous vehicle control and finesse. Drivers throttle the engine, shift gears, tap the brake peddle and spin the steering wheel to put their high-horsepower/lightweight cars into powerslides as they push through an abbreviated race course. The goal is to link corners with perfect accuracy and execution while maneuvering the car without the benefit of rear tire traction. Drifting is very counterintuitive to normal driving as the front wheels are pointed in the opposite direction of the turn.

Judging is based on line, angle, speed and style. The desired line of attack is established beforehand at the drivers' meeting. For angle, sideways is obviously preferred to straight and speed relates not only to entering turns but traveling through them and exiting as fast as possible. Show factors depend on the aggressiveness of  the driver by hugging the wall and smoking the tires and to a small degree the crowd's reaction (but the judges have their own take).

The Booth Babes, Umbrella Girls and Promo Models of 2011 Formula DRIFT Round 7 – Title Fight at Irwindale