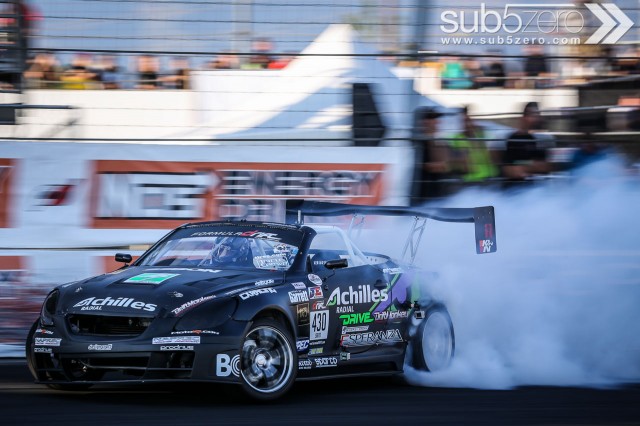 Just over a month ago, you might recall that we predicted the seventh and final round of the 2012 Formula Drift season at Irwindale Speedway would be a thrilling conclusion to the seven round, six state championship trail. We also forecasted that the top three in points going in – former Formula D champions Vaughn Gittin Jr. and Rhys Millen sandwiching U.S. drifting newcomer Daigo Saito – would have a knockdown, drag-out battle royal for the big trophy. Luckily, the events of Saturday’s Round 7: Title Fight proved us right on both counts, but we honestlyweren’texpecting the guy that won the title to do so, nor do it in the manner in which he did.

It became clear that the championship would go to one of the top three in points early on, as both Chris Forsberg and 2011 Formula D champ Daijiro Yoshihara failed to make it out of Saturday afternoon’s Top 32 bracket. And speaking of brackets, the three championship challengers were all on the same side of the ladder, meaning it was quite possible the title would be decided before the final battle of the event. That would turn out to be the case, but how it happenedwouldn’tbe. 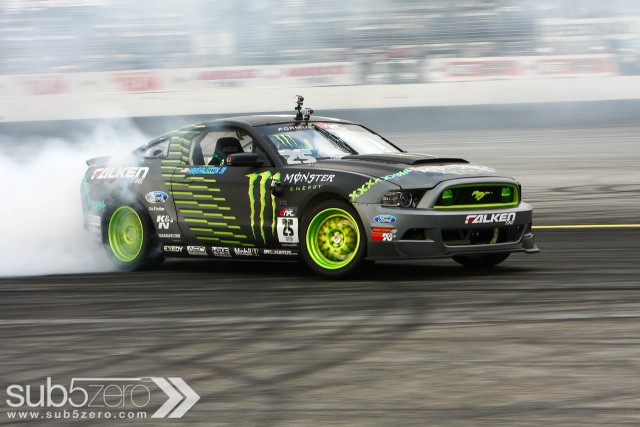 Gittin, who led the points after his third place finish in Las Vegas, faced Patrick Mordaunt in the Top 16 round. The 2010 champ had smooth and smoky lead run, but disaster struck when it came time to follow Mordaunt: After being temporarily blinded by the Lexus driver’s smoke, Gittin saw he was about to wander off the course. But the bearded Marylander overcorrected, and the sellout crowd let out a collective gasp as the Monster Energy/Falken Tire Ford Mustang spun into the infield and out of the competition. Gittin still had a chance at the championship, but just like Yoshihara last year, his destiny was now in other people’s hands.

By contrast, Millen and Saito both made it out of the Top 16 (beating Kyle Mohan and Conrad Grunewald, respectively). Then they dispensed with Mordaunt and rising star Matt Field. This set up a Final Four showdown between the two men in control of their own championship dreams, but those of Gittin. 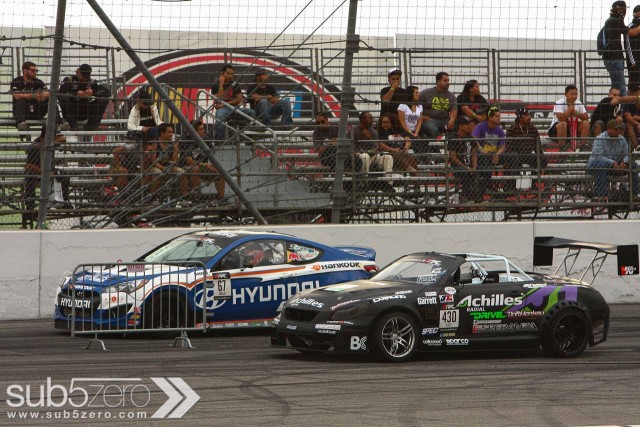 Unfortunately for Millen, his title hopes ended against the Inner Bank wall, as he may have been trying a little too hard to keep up with Saito on his chase run. It was a disappointing end to Millen’s and Gittin’s championship bids, and a disappointing end to Hyundai’s factory involvement in Formula D. It was also disappointing for Gittin, as Millen beating Saito would have kept his hopes alive. Instead, Daigo Saito, the precocious nursery school animal wrangler/bus driver who had never competed on American soil before finishing third in Long Beach this past April, and his turbocharged six-cylinder Lexus SC430, which he and his team built from a waterlogged wreck totaled by last year’s devastating tsunami, found themselves on top of America’s drifting mountain. 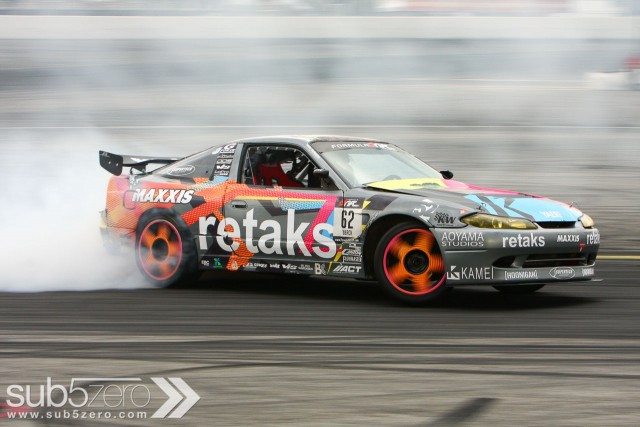 However, there was still the task at hand of deciding the event winner. With Millen’s Red Bull/Hankook Tire Hyundai Genesis Coupe too badly bent to answer the bell for the consolation round, the final step on the podium automatically went to Ryan Tuerck(above). Meanwhile, the driver who defeated Tuerck in the Final Four, Justin Pawlak(below), would square off against Saito for the right to stand on top of the rostrum. 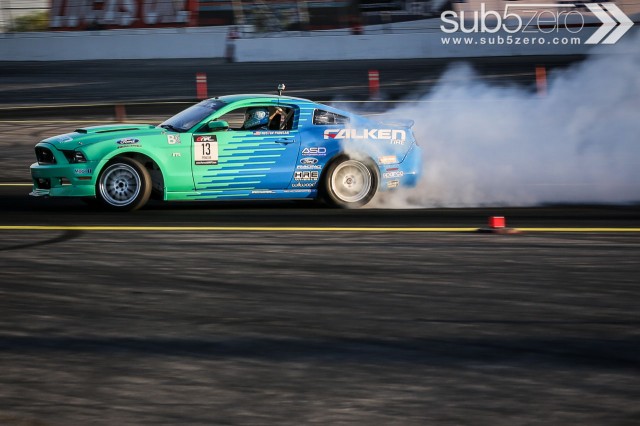 Pawlak led on the first run, and made the most of it. However, Saito never let the Falken Tire Mustang get very far ahead. Then came the new cham-peen’s turn to lead and, like Millen before him, Pawlak fell afoul of the outside wall after the kink at the ovals’ start/finish line, though not quite as violently. Translation: Saito put an exclamation point on his 2012 season by notching his second win and bumping his final championship margin up to 19.5 points over Gittin. 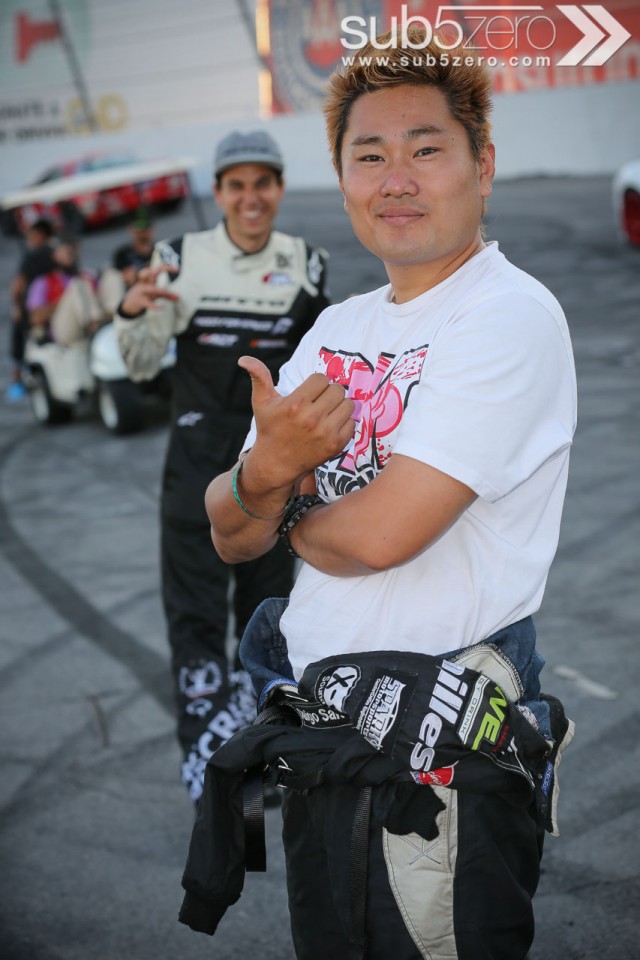 Not to toot our own horn, but we knew way back in April after his P3 result in Long Beach that Saito (above) would be one to watch. However, we didn’t quite see him walking away with the big prize, so don’t go calling us Nostra-Thomas just yet. In any case, congratulations to all of the Formula Drift drivers, teams and officials on an amazing 2012 season. We ended last year’s season finale review wondering how 2012 could top 2011; we’re really at a loss for dreaming up ways 2013 can top 2012, so you better believe we’ll be watching to see if and how it can.