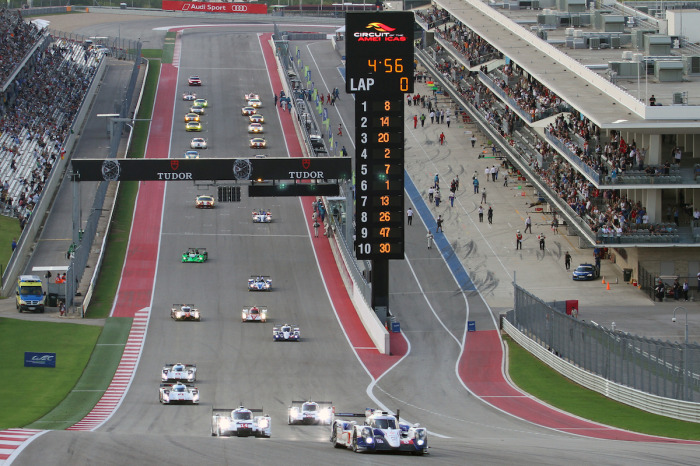 Sub5Zero recently had the opportunity to take its first trip to the recently built Circuit of the Americas, located about 10 miles southeast of Austin, Texas. This incredible 3.4 mile long circuitisU.S. home for many of the world’s top racing series. COTA, as it is commonly referred to, has hosted everything from Formula 1, to Australian V8 Supercars, and starting in 2014, the Summer X-Games. Some oftrack’s 20 turns are modeled after famous circuits from around the world, including Silverstone, Hockenheim, and Istanbul’s Formula 1 track.

The track has a significant amount of elevation change throughout, including an incredible climb down the front straight into Turn 1. From the top of turn 1 looking down, cars on the front straight look like miniatures, it is simply one of the most phenomenal first corners of any track we’ve seen. Sub5Zero’s visit to COTA took place during the 2014 Lone Star Le Mans, featuring both the TUDOR United SportsCar Championship, and the World Endurance Championship (WEC), which features races throughout the world,including the famous 24 Hours of Le Mans, as well as stops in China, Japan, and Brazil, among others. 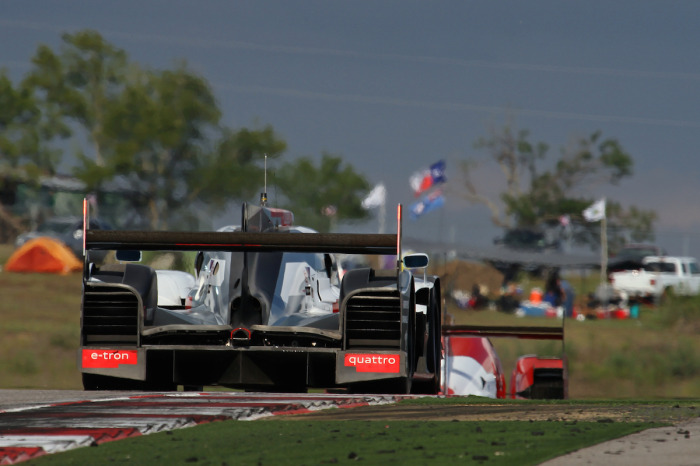 Sanctioned by theFédération Internationale de l’Automobile (FIA), which is governing body that also presides over Formula 1, the WEC series features various classes of cars competing together. Similar to the TUDOR series here in America, WEC features classes that include both Le Man Prototypes (LMP1 and LMP2), as well as race cars that are based on street models such as the Ferrari 458 in the two GT categories (LMGTE Pro and LMGTE Am).

The WEC calendar this year has 7 races, including the 24 Hours of Le Mans, with each race being a minimum of 6 hours long, as was this stop at COTA. We’ll get into a bit more of what happened at this year’s 6 Hours of COTA, but first, let’s take a closer look at some of the incredible machines powerhouse teams that compete in the WEC. 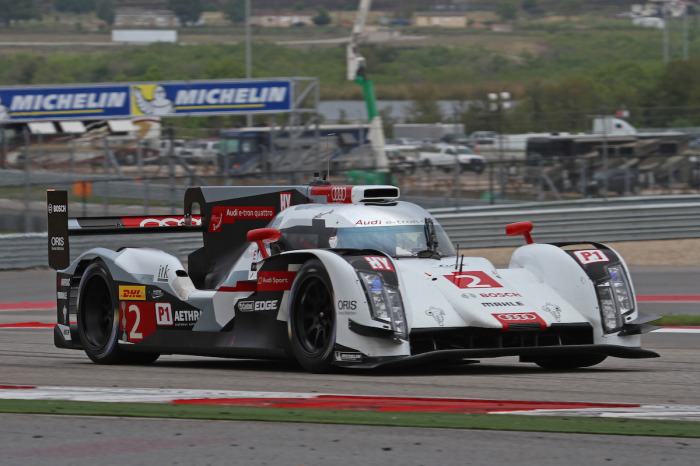 Let’s start with the current “kings of Le Mans”, Audi Sport Team Joest. Since 2000, when the team first entered the newly constructed R8 LMP1, Audi has won the 24 Hours of Le Mans 11 out of the last 15 years. Their latest car, the Audi R18 e-tron Quattro, is quite a marvel of engineering. Based on the R18 Ultra, the e-tron Quattro features a 4.0 Liter V6 turbo diesel engine that powers the rear wheels, and a highly complex hybrid system that drives the front wheels.

Using energy recovered from both the car’s brakes, as well as heat from the gas engine’s turbo, two electric motors drive the front wheels. The e-tron Quattro features other incredible technology, such as laser headlight that are GPS linked. Audi pre-programs each race tracklayout into the ECUs that control system. This allows the lights to change direction “just before” the driver actually begins to turn the wheel, giving them a perfect view of the turn ahead. 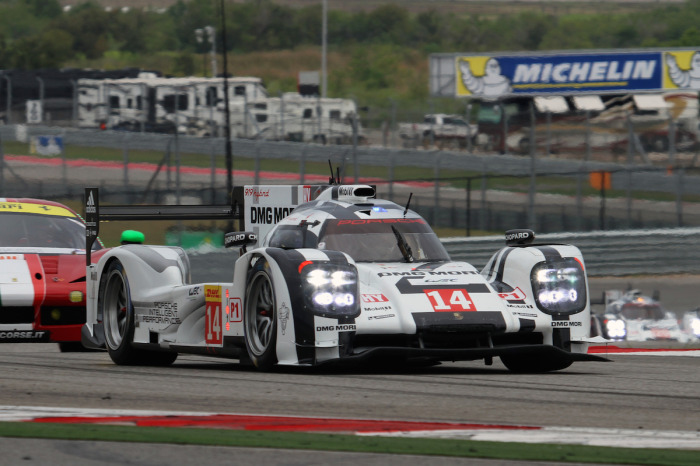 Having won the 24 Hours of Le Mans numerous times in the 70’s and 80’s, Porsche has a deep history in the world of endurance racing. This year marks Porsche’s return to sportscar racing, in which it last competed with the RS Spyder in 2010. Known as the 919 Hybrid, Porsche’s entry into the WEC LMP1 category follows a slightly different formula than that of Audi. The 919 features a 2.0L V4 gasoline powered engine with direct injection that is said to have an output close to 500 HP.

Like all key challengers in the LMP1 category, it also features a hybrid component to its powertrain. Similar to Audi’s entry, the 919 also recovers energy for its brakes as well as its turbo exhaust. Its hybrid powertrain can deliver the equivalent of more than 250 HP to supplement the V4 gas engine. Similar to the Audi, the gas engine powers the car’s rear wheels, and the hybrid system powers the front. 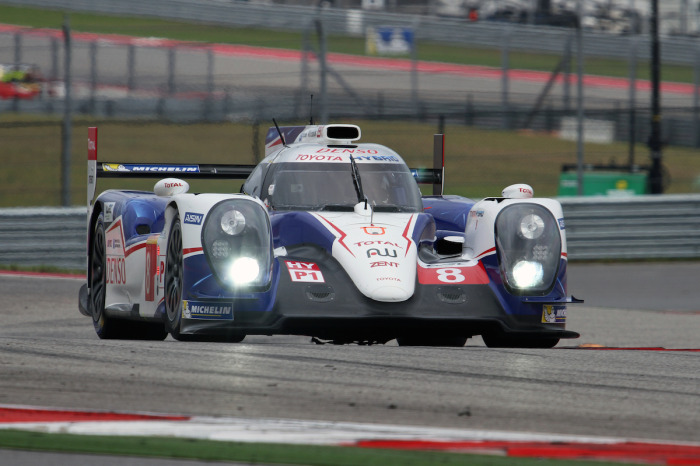 The other key player in the LMP1 world of today is Toyota. Its TS040 Hybrid entry is an evolution of the TS030 Hybrid that marked Toyota’s return to endurance racing in 2012. Unlike the other two cars we’ve already covered, the TS040 features a naturally aspirated gas engine, in the form of a 3.7 Liter longitudinally mounted V8. And similar to the Audi and Porsche entries, its powertrain also has a hybrid component.

Unlike the TS030 which was only rear-wheel-drive, the TS040 also has a super capacitor system that sends power to the front axles. To total system power is equivalent to more than 980 HP, with a little less than half coming from the hybrid powertrain. That’s about 58% more power from its hybrid components than the TS030 car from last season. 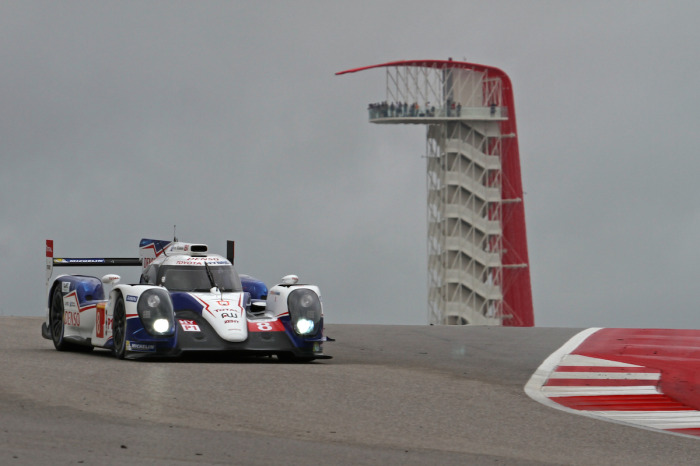 This year’s WEC stop at COTA was nothing short of dramatic. The ever changing weather conditions kept teams on their toes. Some sessions took place in perfectly dry conditions, others in full downpours. The race itself, which began at 5PM local time, started with dry weather, but with very ominous looking clouds in the horizon. Toyota’s #8 entry, driven by Anthony Davidson, Nicolas Lapierre, SébastienBuemi qualified first, followed by both Porsche entries.

Audi’s #2 car started the race in 4th, with the sister TS040 Toyota in 5th. After just a few laps, the #8 car had a comfortable lead of close to 60 seconds. And the #7 managed to make its way into second. All was looking great for Toyota at COTA. That was until the official countdown clock showed about 4 hours and 20 minutes to go in the 6 hour race. 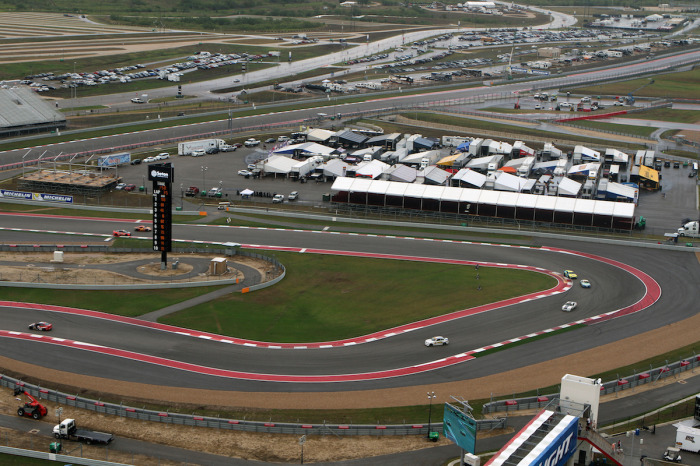 Throughout the weekend, Sub5Zero made numerous trips up COTA’s famous observation tower. From its 250 ft. viewing deck, one can see the entire length of the circuit. While taking some wide-angle, scenic photos such as the one above, we noticed a beautiful rainbow form over the horizon. Soon after, a much needed drizzle provided some relief from the incredible heat and humidity that day.

Our first thought was, that if stays like this, no harm, the track is too hot to be affected by this small amount of rain anyways. But what had started as that enjoyable light drizzle, soon turned into a full monsoon. Numerous cars, which were of course still running on dry weather tires, ended up in the gravel, including both Toyotas. After what seemed like an eternity, race control called for a red flag, temporarily halting the race. But by then, the damage had been done, both TS040s were now a lap down from the lead. 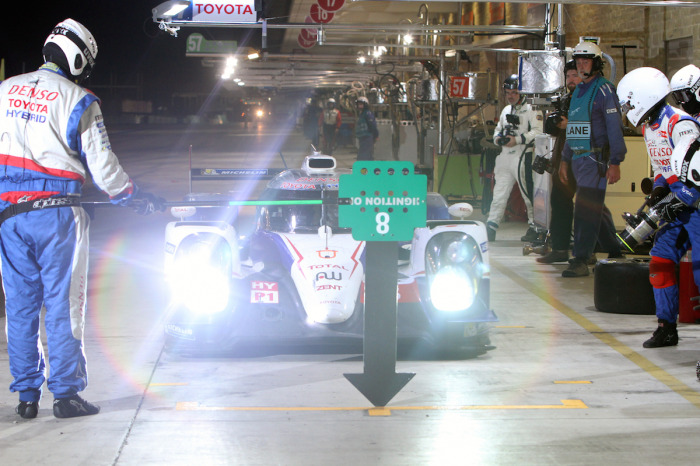 As night fell on COTA, the TS040’s continued to battle, and fight their way through GT traffic in a valiant effort to climb back in the standings. Although the #8 car wasable to run as high as second, in the end, 3rd place was all that was in the cards for Toyota at COTA. The #2 Audi, driven by Marcel Fassler, André Lotterer, and Benoit Treluyer finished at the top of the podium. Not exactly the finish Toyota wanted, after such great qualifying performance and an incredible start, but still a good finish nonetheless.

And in the world of racing, points are points. The #8 Toyota trio of Davidson, Buemi, and Lapierre still lead the WEC standings, as the field heads to Fuji for the next stage in the championship. Sadly, Sub5Zero will not be there to follow the action in person, but we truly hope to catch up with the WEC someday, somewhere, again. It is truly a special racing series, perhaps with more technology, more variety in implementation of that technology, than any other racing series in the world.