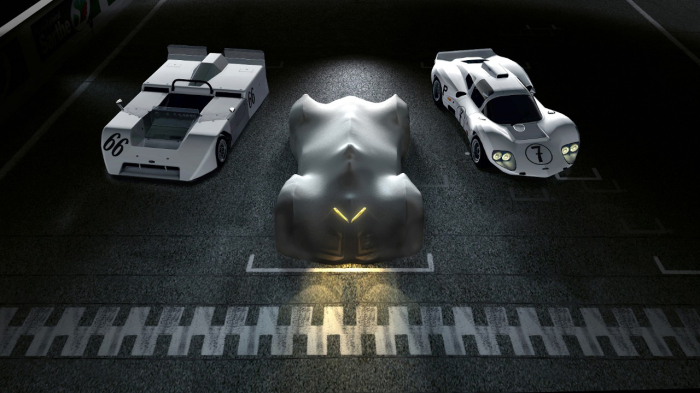 One of the best things about the Vision Gran Turismo program – where car manufacturers and other firms design concept cars to be added to Gran Turismo 6 – is that the cars they come up with are completely unencumbered by regulations of both the road and racing varieties. The original Can-Am series (run from 1966 to ’74) was similarly short on rules, a fact that Chaparral Cars co-founder Jim Hall frequently used to his advantage. So it was only fitting that Chevrolet, the company that provided Chaparral with engines and R&D support (albeit on a clandestine basis, since General Motors management had officially banned factory-supported motorsports activities in 1963) back in the team’s and the series’ glory days, would use its Vision GT submission to pay tribute to this living legend and the boundary-pushing white sports prototypes he created.

Officially named the Chevrolet Chaparral 2X VGT, this concept car is primarily the work of GM’s Advanced Design Studio, but the designers did ask for and receive input on the project from Jim Hall. So far, all we’re getting is teaser images and the video below; the full reveal comes next week at the Los Angeles Auto Show, while the car will be available in GT6 “during the holiday season.” (Hey, it wouldn’t be Gran Turismo-related news if there wasn’t some temporal ambiguity involved, right?)