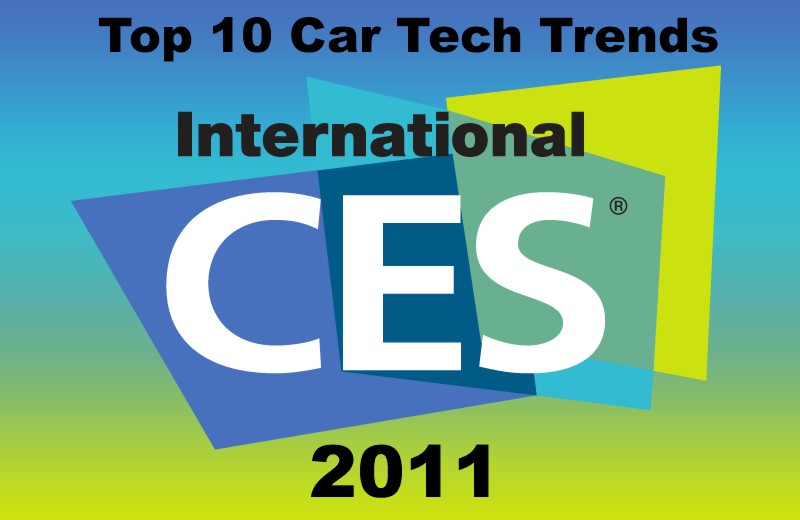 The annual tech-geek powwow known as the Consumer Electronics Show (CES to its friends) may be over and done ‘til next January, but the impressions made by many of the products featured at this year’s show will remain for years to come. This should prove especially true in the realm of automotive electronics, where some truly game-changing gadgets, widgets and thingamabobs had their coming out parties. Which ones were able to compete with the swarms of booth babes when it came to drawing our attention? Click on through to the other side. 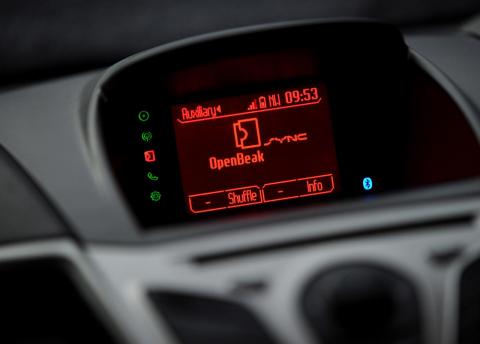 We’ve chronicled this technology before, but now that it’s available to owners of Sync-equipped Ford Fiestas (and announced to be bound for next year’s Mustang), its story is worth repeating. The system allows smartphone apps like OpenBeak, Pandora and Stitcher to be accessed hands-free (okay, you’ll need a thumb to push a steering wheel-mounted button) through the Sync system. Right now it only works with Blackberry and Android phones, but Ford says iPhone support is coming very soon. 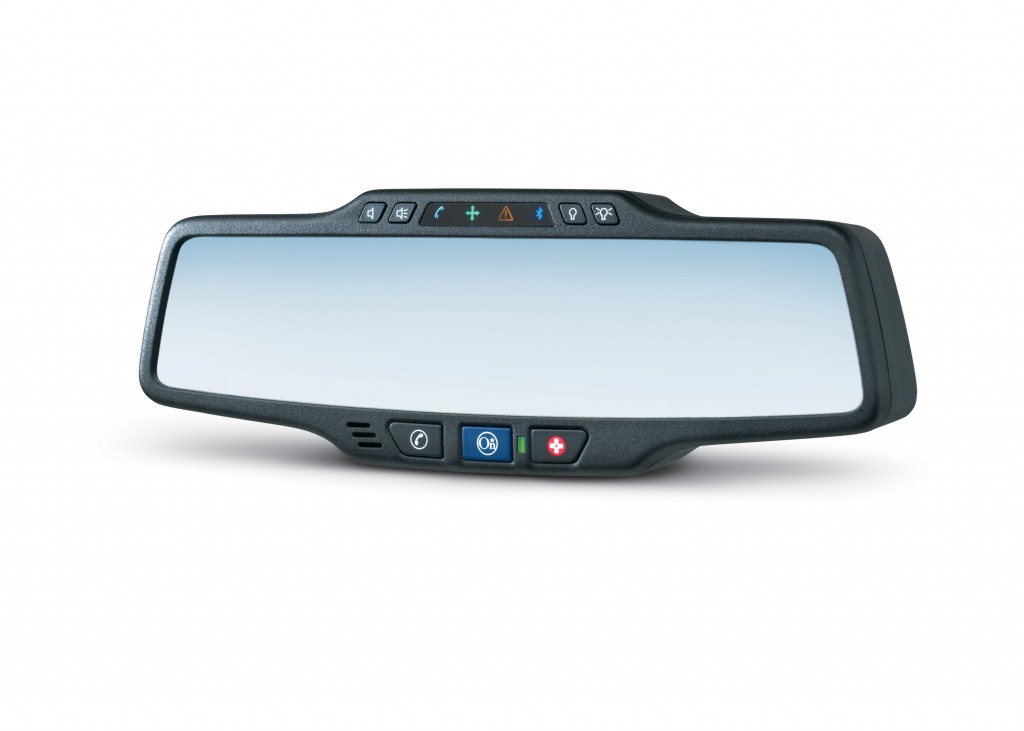 It’s pretty safe to say that OnStar has been one of the few additions to the GM empire of the last quarter century that has had anything remotely resembling staying power: Saab never really took off (Heh…) under the General’s command, alliances with Fiat and Subaru each lasted all of about 10 minutes, and Saturn and Hummer are both synonymous with “flash in the pan.”

Now the humbled-by-bankruptcy-and-nationalization GM hopes to extend OnStar’s reach by making the service available in any car. For $299 plus installation and subscription fees, motorists will be able to purchase an OnStar Anywhere rearview mirror at their local Best Buy beginning this spring and have access to all the features for which OnStar is known, including turn-by-turn navigation, stolen vehicle tracking, automatic crash response and locating the nearest restaurant or other point of interest. 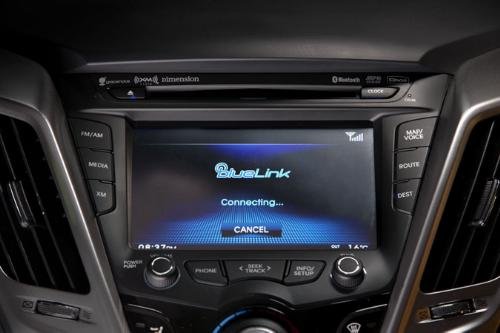 Not content to let OnStar have the market to itself, Hyundai has developed its own multifaceted telematics system called Blue Link. The service will ape pretty much all of the capabilities of OnStar (stolen vehicle tracking, turn-by-turn directions, remote door unlock, etc.), while also boasting some unique ones like “geofencing,” where a text message will be sent to the owner notifying if the vehicle has left or entered a certain area (Rebellious teens and unfaithful spouses, consider this your warning.). Look for Blue Link to show up as an option on the Sonata and a “youth oriented model” (Read: Veloster) at first, with availability on every Hyundai coming for the 2013 model year.

Though not a particularly new technology, HD Radio is expanding its reach, particularly into new vehicles. This year’s Ford Fusion, Volkswagen Jetta, Subaru Forester and every BMW and Volvo are just some of the cars and trucks being fitted with HD Radio receivers at the factory. What’s more, next year’s Toyotas will feature iTunes tagging if they’re fitted with an HD Radio head unit, while Volkswagen will be the first OEM to implement Artist Experience – which displays things like album art, concert photos and other visuals – on its head units. Though we also saw lots of early support for satellite radio by automakers early on, we’re betting HD Radio will fare better. 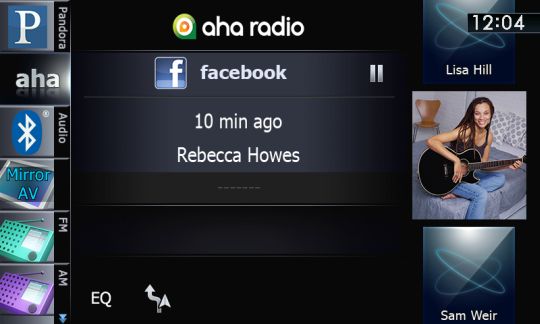 Ford’s AppLink is a great way to (theoretically) make driving while using your smartphone apps safe, but what if you want something like that for your non-Ford product? Pioneer Electronics and Harman’s Aha Radio have an app for that…literally. Dubbed (rather unimaginatively) the Aha Radio Mobile App, this free iPhone app serves up 100 channels of content like traffic reports, podcasts, Facebook and Twitter updates, Pandora streams and area dining recommendations from Yelp to compatible Pioneer audio systems (currently Pioneer’s two fanciest AVIC-series head units, the Z130BT and X930BT), where everything will be read out loud through the speakers. Best of all? No having to jump between and sign into multiple apps. 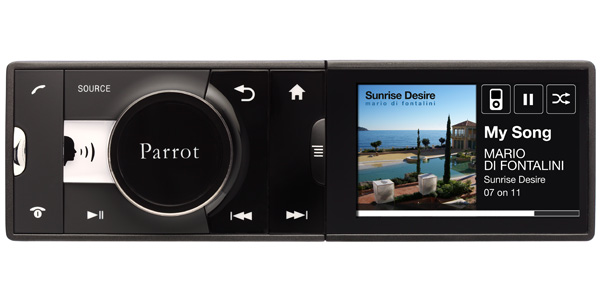 Got an Android phone? Are you so smitten with it that you wish there were more devices in your life that ran Android, up to and including, say, your car stereo? Say hello to the Parrot Asteroid. The Asteroid can connect to antennas for GPS and 3G “keys,” the latter of which provides access to a smorgasbord of cloud computing-based apps. Asteroid also syncs up with your smartphone’s phonebook for hands-free dialing and calling, and it lets you call up your music collection (be it on an iPod, iPhone, SD card or line-in device) by voice. Slick.

You’d be forgiven that that plug under your dashboard is only good for telling the dealership techs what’s causing the check engine light to illuminate. Trouble is, an OBD II (Onboard Diagnostics, second generation) port has a lot more potential than that. Thankfully, Griffin Technology is getting the word out with its new CarTrip system. A wireless monitor plugs into the port and transmits data from the engine management computer to your smartphone. Once there, a free companion app called CleanDrive lets you monitor your machine’s vital signs, as well as taking stock of your driving habits and using that data to make suggestions for how you can adjust your techniques so you can go farther on a tank and, in turn, shrink your carbon footprint. 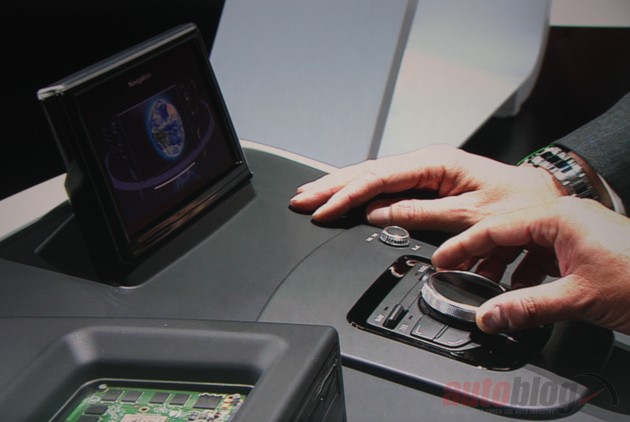 Okay, it’s not officially called “V2.0”; we’re just using it to differentiate it from the first-generation system found in the Audi A8. This new system (which is expected to debut on the next-generation A3) features an enlarged rotary knob with a touchpad occupying the entirety of the top of the hub. Like the current MMI Touch, the new version’s touchpad will recognize handwriting, plus scrolling and, purportedly, panning and zooming a la iPad or devices with a similar interface. The demo at the NVIDIA booth (they being the provider of the Tegra chipset that powers it) was running Google Earth seamlessly, and Audi says it has over 100 engineers working on other bits and bobs of software. Wowzers. 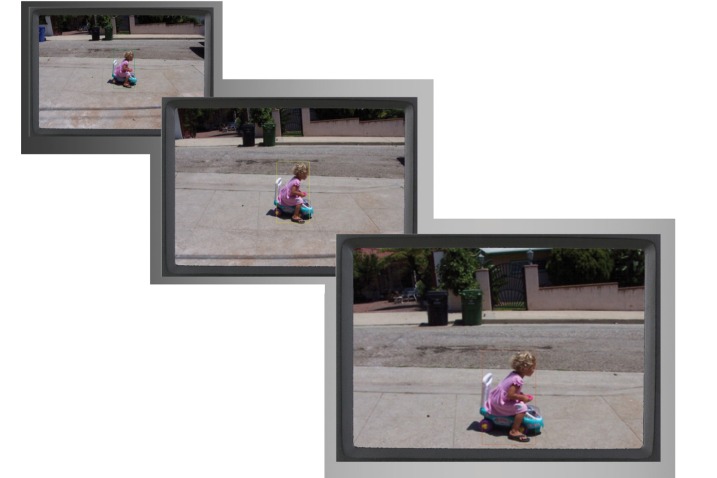 Thousands of new vehicles are being sold with rearview cameras that display what’s behind you on either the navigation system screen or some other video display when the transmission is in reverse. Still more aftermarket units that perform the same duty are being purchased. In most cases, that’s all they do: show what’s behind you. More sophisticated integrated systems have the ability to detect objects (or more importantly, people), but again, not every system does.

Audiovox wants to change that with its Advent PWM400. In basic terms, it’s a module that piggybacks on an OEM backup camera system. It can distinguish a moving person from a stationary object from up to 15 feet away, and it provides warnings of both the visual (on the factory screen) and audible (via an included auxiliary speaker). While we fancy our driving skills to be above the need for such “crutches,” and feel that they can lead to laziness and inattentiveness, any gizmo that can potentially save lives (particularly young ones) is okay in our book. 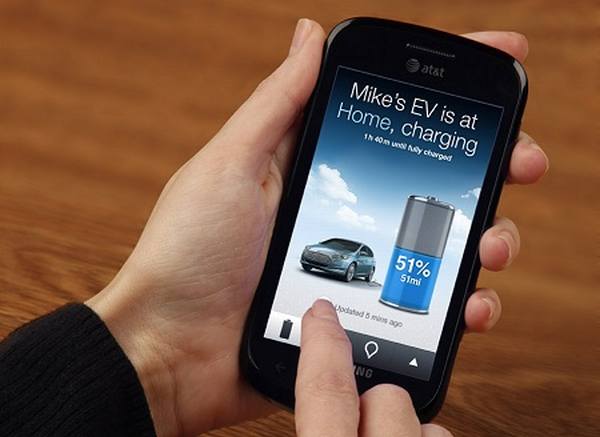 With electric vehicles beginning to proliferate, automakers are having to figure out ways to make their battery-operated wares a) stand out from the herd and b) give their owners and lessees an enjoyable motoring experience. One of the most popular ways to accomplish this seems to be smartphone apps that let you do things like monitor the charging process and pre-heat or pre-cool the interior while the car is still plugged in. Since Ford is the latest car company to unveil its production EVs, it’s only fitting that it would also be the latest to announce just such an app.

MyFord Mobile lets users do the things mentioned above, plus it uses GPS to locate the nearest public charging stations and allows your phone to act as a door lock remote control. With at least a pair of EVs (Focus and Transit Connect) and a plug-in hybrid (C-Max Energi) on the way in the next couple of years, you can bet Dearborn will be getting plenty of miles out of this particular relationship between cars and phones, two inventions that may have separately dominated the 20th century, but are becoming closer and closer allies in the 21st.