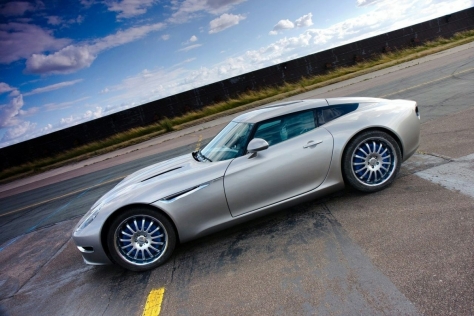 Back in 2007, UK-based Lightning Car Company (LCC) announched that it was going to make a 700-hp equivalent all electric sports coupe. That car officially made it’s debut at the British Motor Show this week. The Lightning GT has a carbon fiber and Kevlar body that somewhat resembles an Aston Martin, with sleek low slung styling. But it’s real claim to fame is that each wheel operates based on power provided by individual engines from Hi-Pa Drive. The integrated motor and drive electronics create power densities up to 20 times greater than conventional systems.

Having separate engines for each wheel distrubutes weight more effectively as well as eliminates the need for a differential and frees up space under the hood, which can be used for additional storage. The same Altairnano NanoSafe batteries used for the Phoenix SUT and electric MINI will be employed. These batteries are thermally safe, have no toxic or heavy metals, last 12+ years and only take 10 minutes to recharge.

With all the talk of the ultralight body and electric powertrain it’s easy to overlook that this car will also have a fair number of standard appointments. Look for leather and Alcantera uphostery, electric door entry, traction control, halogen headlamps, LED auxiliary lights and anti-lock brakes. Things such as air conditioning and satellite navigation will be optional.The Lightning GT should go on sale in 2010 at a price of 150,000 euros.