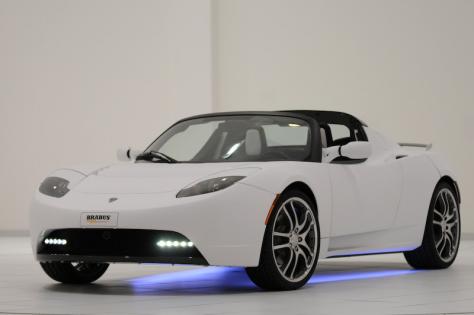 The green auto movement has made great strides in the past few years. Customers first took notice and now tuning companies are warming up as well. To that end, Brabus recently formed a new division aptly named Zero Emission. At the Essen Motor Show they made their official world debut of the first tuned electric sports car, the Tesla Roadster. Brabus now offers an “exclusive customization program” with Tesla. The new vehicles will be cobranded with the addition of a new Brabus badge with a lightning bolt.

The mods are more subtle than other Brabus offerings but definitely appropriate. The major external tweaks involve a hefty dose of lightweight carbon fiber making its way into new air inlets, a rear wing, rear diffuser and front lip. A special matte white paint job is applied to the entire car with a special application to the front and rear tail lights. Futuristic Brabus entrance lights run along the sides to match the theme of technological advancement.

The Tesla rims are swapped out and replaced with a set of BRABUS Monoblock S light-alloy wheels with 18x7s in front and 19×8.5s in rear. These wheels will be wrapped in Pirelli P Zero Nero high-performance tires, with front axle size at 215/35ZR18 and rear axle size at 255/30/ZR19.

If you’ve even driven a Tesla Roadster the most glaringly absent feature in a sports car is the throaty rear of the engine. The folks at Brabus have created a ‘space sound generator’ to provide engine sounds and allow a choice of a V8, racecar engine or some nice ‘Beam’ and ‘Warp’ spaceship noises.

On the inside, Brabus does a nice job of enriching the lack of luxury appointments native to the Tesla. Upgrades include Brabus custom leather and Alcantara upholstery throughout the interior with white seams in the cockpit to match the exterior. In addition, there are scuff plates with a backlit Brabus logo. All in all, a very nice blend of form and function.