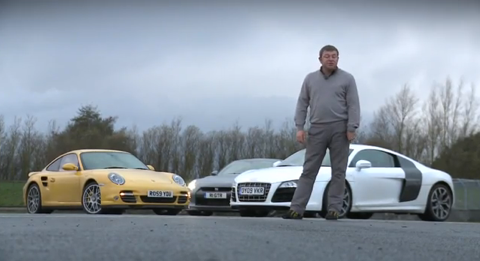 Autocar magazine recently took three of the most popular and exciting entry-level supercars and pitted them against one another at the famed Castle Combe circuit in the UK. Steve Sutcliff took the Nissan GT-R, Audi R8 V10 5.2 FSI and the Porsche 911 Turbo around the track to see which of these dynamos could produce the best lap time.

When all was said and done, after each car had its time on the track, the results were all within 1 second of each other. Mitigating factors such as worn brakes and poor grip were cited as to why some vehicles performed better than others. And time in and out of the turns was a good indicator of overall quickness. But at the end of the day the results were not as surprising as you might think. That said, Sutcliff was Chatty Cathy around the Castle Combe track and we would have liked to have seen some helmeted and harnessed, balls to the wall driving. But Autocar produced an excellent high-def video and overall, we say bravo!