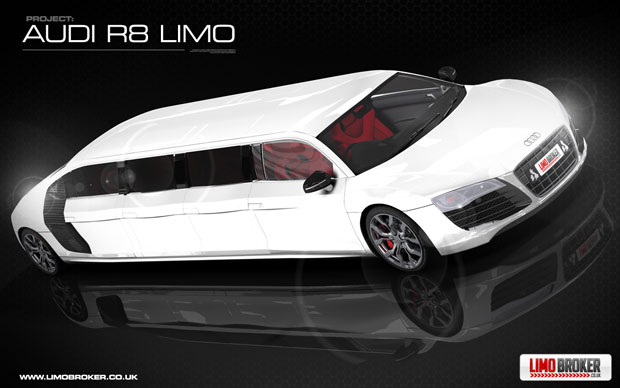 The limousine-building industry is in a bit of a transitional period right now, as one of the most (if not the most) popular starting points for a limousine conversion – the Lincoln Town Car – is no more. The Town Car's body-on-frame construction made the stretching process far more straightforward than it is with unibody vehicles, plus it was durable and easy to work on; this shouldn't be surprising, since this old school Lincoln was built on the same Panther platform as the taxi- and law-enforcement-favorite Ford Crown Victoria.
So what will take the Town Car's place? Lincoln wants coachbuilders to switch to their MKT crossover, but Cadillac, Chrysler and others are fighting for pieces of the pie, too. But it's hard to predict what vehicle – if any – will become the new dominator of the livery market. We can tell you, though, that it won't be the Audi R8 V10…but that isn't stopping one coachbuilder from stretching one. 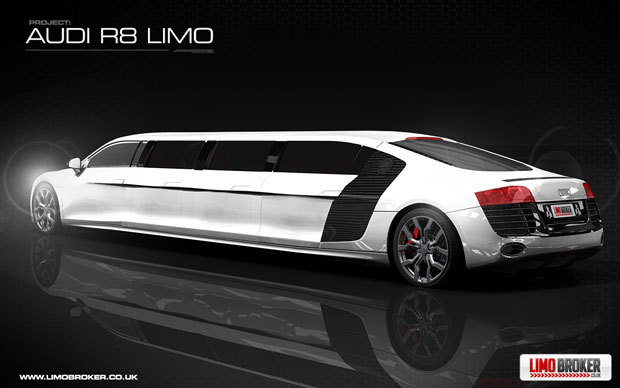 Limo Broker, based in the Welsh capital of Cardiff, is one of the U.K.'s biggest limo service and sports car rental companies. It also owns the only Ferrari 360 Modena limo in Britain, so it's only natural that it would be adding another elongated exotic to its fleet. Like the Ferrari, this stretched R8 is being built by Carbonyte UK. Also like the Fezza, this Audi will feature forward facing bucket seats in back, accessed by gullwing rear doors. The four rows of two red racing buckets and lack of a divider don't exactly lend themselves to the sort of amorous activities in which rear compartment passengers of more traditional limos have been known to partake, but considering this car's capabilities, that's probably a good thing.
Said capabilities are noticably diminished from those of a stock R8 V10, but the 5.2L V10 is still putting down 525hp to all-four wheels, and Limo Broker says this thing will still top out at 196 mph if the chauffeur is feeling frisky. That's probably enough to make it the fastest street legal limo in the world. 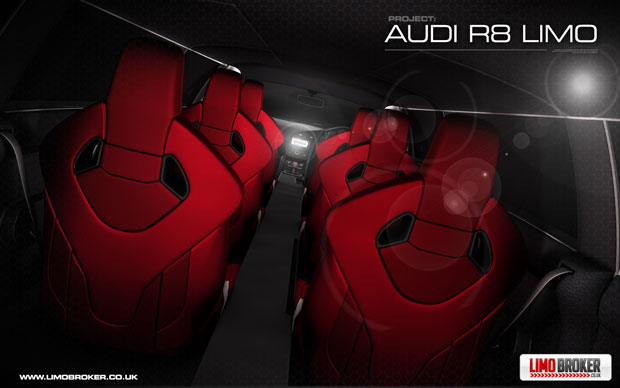 Limo broker says the R8 V10 Limo should be ready to hit the road this summer, just in time for wedding and prom season. We aren't sure what percentage of British brides-to-be and Secondary school coeds would prefer this to a Town Car or a Hummer H2, but we're guessing a large percentage of their male companions would pick this over any Yank tank. And until the real deal is ready for its closeup, feast your peepers on these computer renderings and this epicly-scored computer animation.
Audi R8 V10 Limo Image Gallery:
Source: Limo Broker
Tweet
Share5
Share
Pin14
19 Shares
Categories
Offbeat
Tagged
AudiExotics|SupercarsGermanLimoLimo Broker
0
Back to Top