Auctions America Rolls into Burbank with an Interesting Vehicular Mix 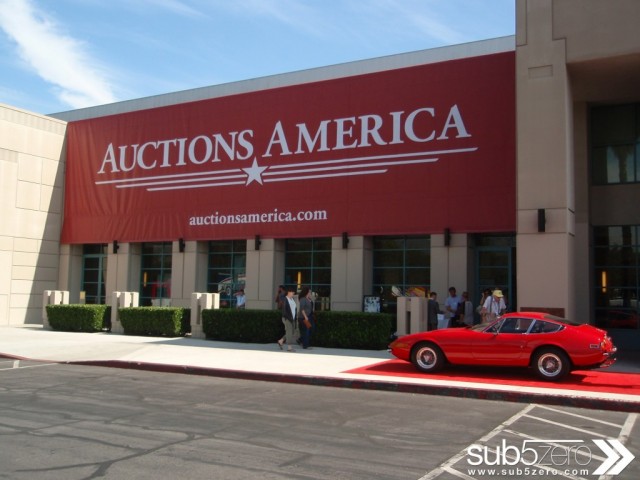 When thinking of a great location for a collector car auction, the Los Angeles suburb of Burbank, California probably doesn’t spring immediately to mind. But this doesn’t mean the town is ill-suited for the occasion; in fact, it’s quite the opposite. Inside the city’s borders, you have a Bob’s Big Boy restaurant with car hop service and a weekly car show, Autobooks-Aerobooks (arguably the most awesome bookstore in the country as far as gearheads are concerned), and Jay Leno’s Big Dog Garage. Again, that’s just the stuff inside Burbank city limits; there are, of course, hundreds – if not thousands – more car nut events and destinations to be found within a hundred mile radius.

So Auctions America was not, in fact, inebriated when it selected the Burbank Airport Marriott Hotel and Convention Center as the location of its first ever Southern California sale this past weekend. If anything, it was a stroke of genius, particularly due to the venue being literally right across the street from one of the busiest regional airports in the country. And the consignors agreed, bringing a fascinating, eclectic mix of vehicles to be sold. Here are just some of the lots that caught our eye. 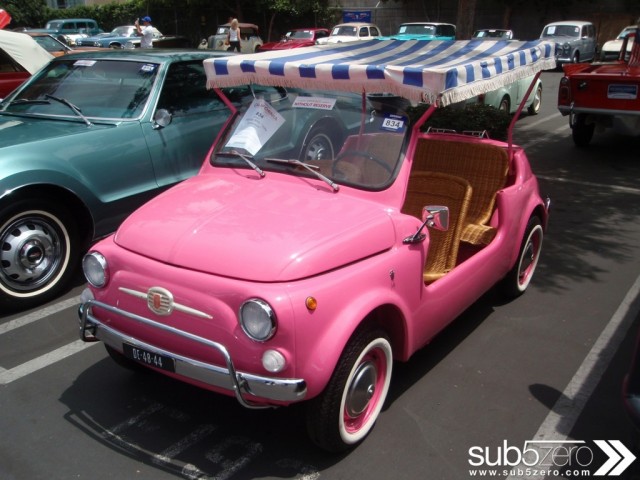 It seems like most auto auctions lately have had a prevalent theme or category that made up a significant chunk of the docket. In the case of Auctions America’s Burbank sale, it seemed like microcars were the order of the weekend. There was the expected gaggle of BMW Isettas (plus the occasional Messerschmitt and Goggomobil), sure, but there was also a rare Taylor-Dunn Trident (an electric three-wheeler with a tiller rather than a steering wheel) and not one but two Fiat Jollys (open-air, no-door versions of the classic 500 and 600 with wicker seats and, in the case of the Fiat 500 Jolly (above) – which was a replica – a surrey top). It truly was an infestation of cuteness.

Of course, if you’re into the opposite of cute, there were more than a few barn finds (42 of which came from NorCal collector Jim Carr) and unrestored survivors in need of everything from a simple spit-and-polish to complete rebuilds. But the diamond-in-the-rough that stole the show (and, not coincidentally, brought the most money) was a 1952 Cunningham C3 Coupe project car. This assembly-required American sports car – which is powered by a 331 cubic-inch Chrysler Hemi V8, and is believed to be the only Cunningham fitted with Borrani wire wheels at the factory – brought an eye-popping $360,000 (plus fees and taxes), well above Auctions America’s $175,000-$225,000 pre-sale estimate. And bringing it back the rest of the way to its former glory should be a fun (if expensive) process. 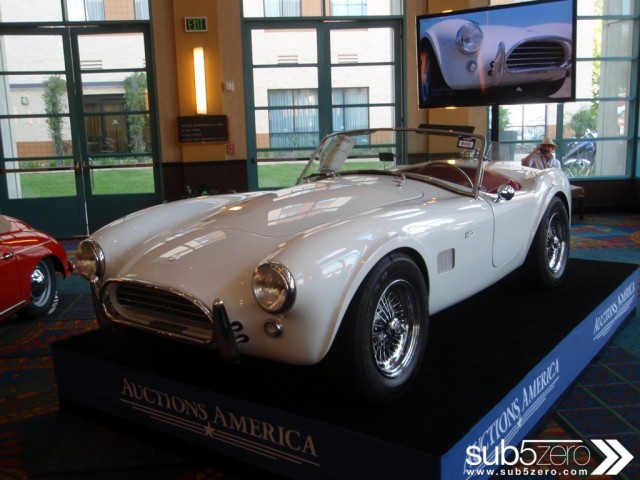 However, the Cunningham was not the priciest ride to go to a new home. On Friday it looked like a ravishing-in-ruby 1957 Mercedes-Benz 300SL Roadster formerly owned by legendary actor Robert Stack would be the top-sale of the weekend at $735,000. But the next day a 1964 Shelby Cobra 289(above) just barely topped it when it brought a $750,000 hammer price. And this wasn’t just any small block Cobra; it was one of about 20 fitted with Ford’s C4 3-speed automatic transmission. Normally an automatic transmission detracts from the monetary value of a performance car, but in the case of this rare slushbox Shelby, it really didn’t seem to hurt it when it crossed the block, and might have even helped it a bit. 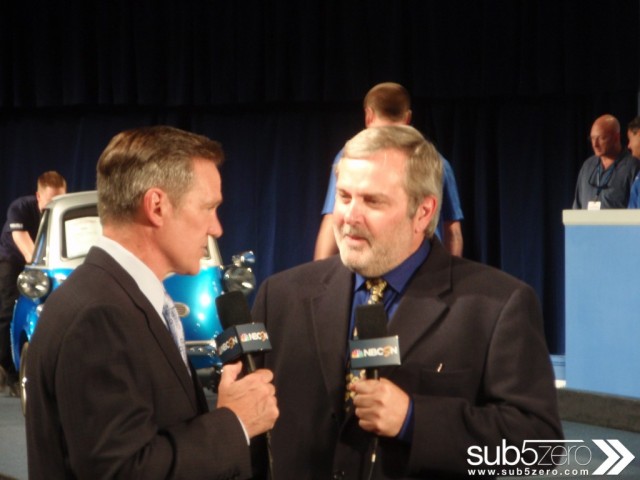 All things considered, the sale seemed to go as well as Auctions America could have hoped for considering its inaugural event status. From what we could see, the crowds fairly large and diverse, and most of the bidders seemed to know their stuff (i.e. not overpaying by massive amounts). And live TV coverage on the NBC Sports Network featuring former Ferrari dealer mechanic (and 1995 Formula 1 world champion mechanic and pit crew member) Steve Matchett(above right, with co-host Bill Patrick) and, briefly on Saturday, the aforementioned Mr. Leno (whose garage is literally just on the other side of Bob Hope Airport) brought the action to folks who couldn’t be there in-person. Hopefully this auction will become an annual staple on the Southern California car nut calendar. 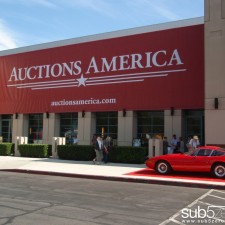 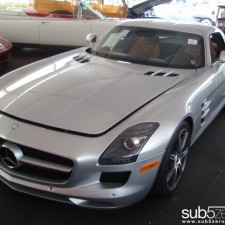 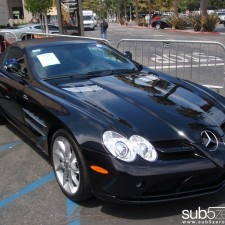 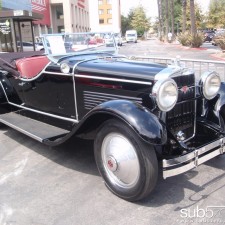 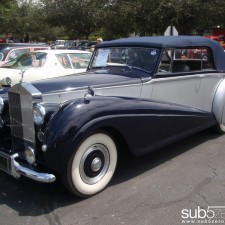 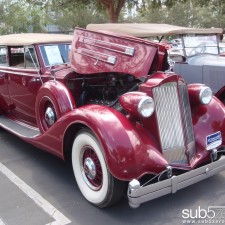 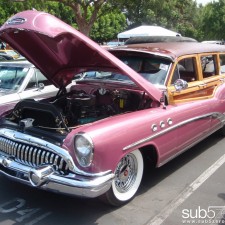 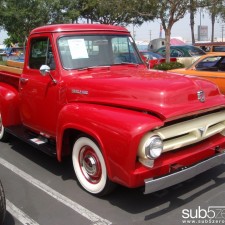 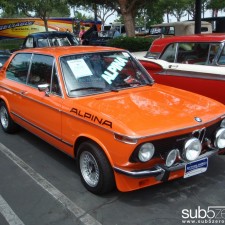 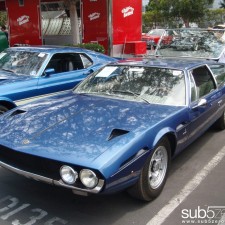 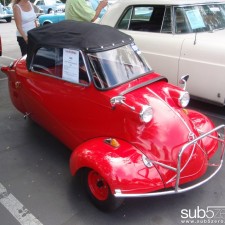 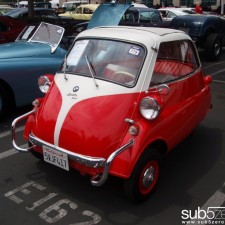 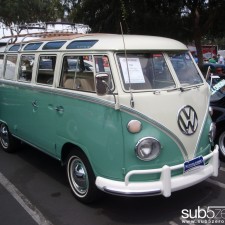 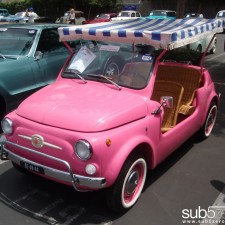 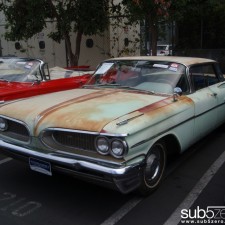 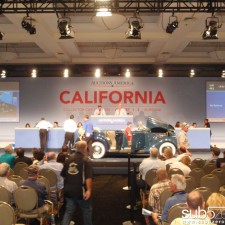 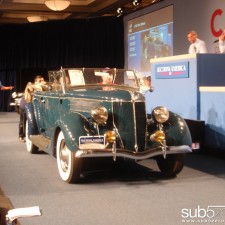 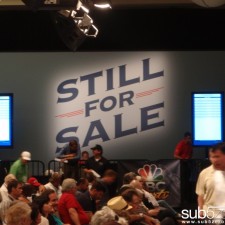 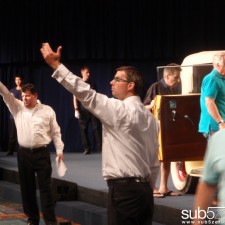 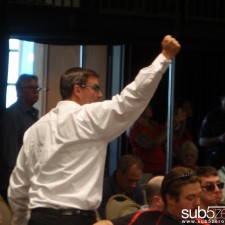 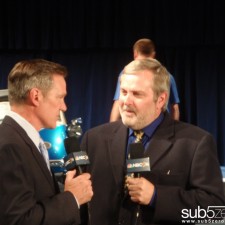 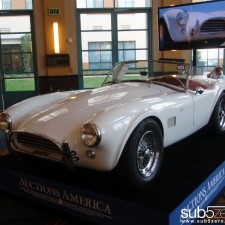