The Aston Martin Rapide (and its successor, the Rapide S) is a powerful, painfully-pretty four-door grand tourer. And that distinction is important because, in the opinion of ourselves and many other petrolheads with a bully pulpit, not very sedan-like. High sills make getting into the back seat something of a chore, and once you are ensconced in the rear quarters, there’s not a whole lot of room in any dimension. Frankly, if it’s a family-friendly four-door sports/GT car you’re after, you (or at least your passengers) would be far, far happier with a Mazda RX-8…plus you could afford to buy quite a few other cars with the money you save. 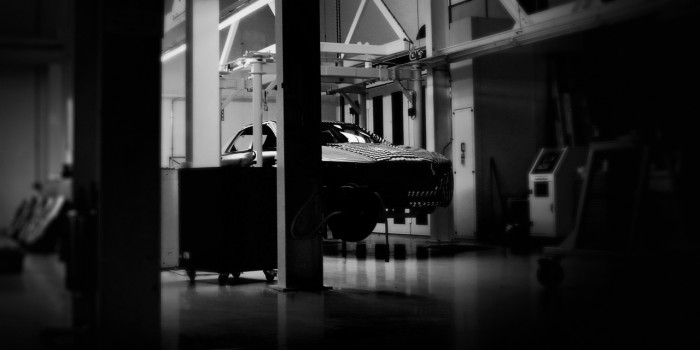 Of course, Aston Martin has built a proper sedan in the past: The striking William Towns-penned Lagonda, which featured Aston’s 4-cam 5.3L V8 and unmistakable “Curves? What are those?” styling. More recently, the famed British nameplate applied the Lagonda moniker to an SUV concept whose appearance was…homely, to put it diplomatically. But now it looks like the label is going back on a big luxury sedan. What’s more, if these teaser shots are any indication, it looks like Aston Martin is paying tribute to the old Lagonda’s proportions (if not its angularity). However, it’s all modern underneath, with the company’s latest VH platform and 5.9L V12 providing the skeleton and heart, respectively.

Unfortunately, don’t expect to get your hands on one of these super sedans. For starters, production of the new Lagonda will be “strictly limited,” but that’s not the bigger bummer. No, that honor(?) goes to the fact that this car will only be available in the Middle East, and even then, you’ll have to be “invited” by Aston Martin to purchase one for an undisclosed (but no doubt super-lofty) sum. Yet another compelling reason to have your own emirate, we suppose…