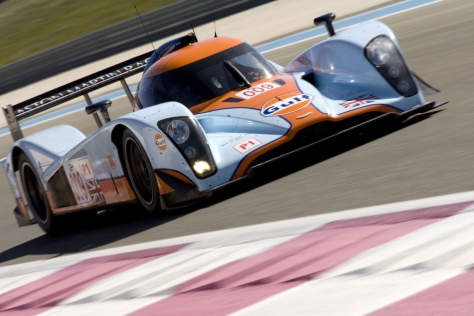 Just on the heels of Audi’s latest announcement concerning the running of their second generation diesel based R15 TDI at the American Le Mans season opener, Aston Martin is prepping a new prototype for the Le Mans Series overseas. The company held special test runs at the Paul Ricard Circuit in France during March 8th and 9th. This test track was open for the first time in 10 years to members of the public. All told, 3500 people showed up to watch 28 of the 50 cars that will compete in the Le Mans Series complete several runs.

This year in the LMP1 class, Aston Martin will run two racers numbered 007 (of course) and 009. Both feature a Lola chassis and the V12 engine from the DBR9. The cars are decorated in the throwback orange and blue palette of Gulf Oil International, which is their primary sponsor. The Le Mans Series includes 5 races which take place in Spain, Belgium, Portugal, Germany and the UK. Each race consists of a 1,000km course. In addition, Aston Martin will compete in the Le Mans 24 hour race in June.