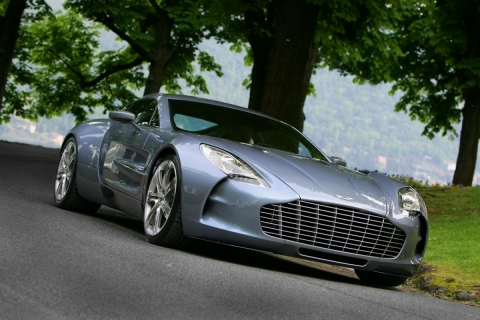 The Aston Martin One-77 that has been shown in various states of readiness made its world premier in final form at the Concorso d’Eleganza in Lake Como, Italy. Not only was it a show stopper but it also won the coveted ‘Design Award for Concept Cars and Prototypes.’ The last time we got a glimpse of this supercar it was basically just a rolling chassis at the Geneva Motor Show in March. Now, it has been completely built out with working drivetrain and transmission along with a lavish interior. A total of 77 units will be produced, hence the name One-77.

Aston Martin CEO Dr. Ulrich Bez stated, “Embodying everything Aston Martin stands for; the One-77 has proven itself as the most desirable automotive art form at its premiere today. We have achieved a new level of design and craftsmanship which has been clearly recognised by the public here in the homeland of design at Villa d’Este.”

Pricing starts around $1.5 million. For this you get a 7.3 liter V12 engine putting out over 750 hp controlled via a six-speed robotized gearbox with steering wheel mounted paddle shifters. The car weighs in at around 3,300 pounds which is actually light for a car with all the luxury appointments that the One-77 has been outfitted. The Aston Martin One-77 will be able to make the sprint from 0 to 60 mph in under 3.5 seconds with a top speed of over 200 mph.