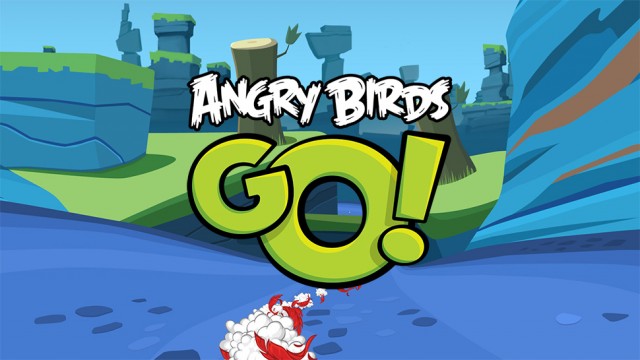 We enjoy video games, but thus far we’ve managed to avoid getting sucked into the whole Angry Birds craze. It’s not that we don’t think we’d have fun playing it (colorful cartoon fowl and swine and puzzles involving calculating speeds and trajectories with the aim of destroying stuff are all things that pique our gaming interests); rather, we’ve stayed away from this multi-million dollar empire because a) we’re worried we’d become addicted, and b) we actively endeavor to not be slaves to fads (unless it’s something we’d genuinely enjoy being a part of).

Come December 11th, however, we might (and we do stress might) have to reverse our stance on the whole Angry Birds thang. What happens on December 11th? That’s the day Rovio Entertainment, the company behind the Angry Birds franchise, will release Angry Birds Go!

As you’ve no doubt figured out by now, Angry Birds Go! takes the birds and their green porcine foes karting. And like any whimsical karting video game worth its salt, there are plenty of power-ups like rocket boosters and projectiles to tilt the odds of success more toward the player’s favor. However, Angry Birds Go! takes things a step further by letting players customize their karts for things like more speed, better handling and improved durability.

Angry Birds Go! will be free-to-play on all four current major mobile device platforms: iOS, Android, Windows Phone 8 and BlackBerry 10. Of course, you’ll be able to pay to get extra content or unlock content sooner. And the most noteworthy extra content has got to be Telepods, miniature character-and-kart toys made by Hasbro. Like any toy cars, you can push them around your desk while making engine and tire noises (not that we still do that…often); place them atop their clear plastic pedestals (which you in turn place atop your smartphone or tablet’s camera), however, and a digitally-rendered version of that same kart and character tandem becomes available to use in the game. Neato! Uh, we mean, that’s kinda cool…