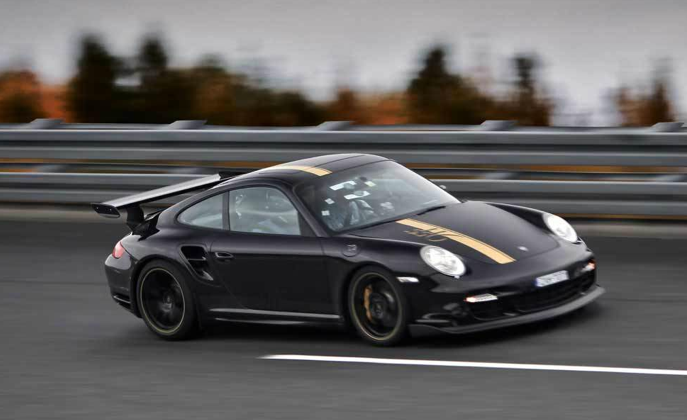 The number of insanely-fast, custom-tuned Porsche supercars this year has been as numerous as the drops in a rainstorm. Every month either the top companies put out an updated model or a new challenger steps into the ring. Each time the cars get a little better looking, a little bit faster, and a little more expensive. One of biggest names this year has been 9ff, offering custom versions of nearly every Porsche model.

While its cool when a shop adds 50hp to a Cayman S, it’s like watching fly-weight boxing. Sure they’re nimble, and hit fairly hard, but it just tides you over until the next Tyson fight. For tuners, the thrill happens when they create that “let’s see what you can really do” model. This is 9ff‘s, the TR-1000. Oh, did I mention it goes 243mph (392km/h)? (See the videos after the jump.)

It does. It did it at the high-speed track in Papenburg, Germany. If you want to know how fast that is, look up “ballistic missile.” Specs are incredibly scarce right now, and pictures are pretty much non-existent. I wound up finding a post by a Frenchman, who had translated the specs from a German auto magazine. I felt like I was playing an international game of “telephone.” After deciphering it all, here’s what we know:

Based on the Porsche 997 Turbo, its engine displacement is increased from 3.8 to 4.0 liters. Power figures weren’t available, but with 9ff offering a 950hp package on its website, and this being above that, I’m guessing it’s a 4-digit number. Massive inter-coolers keep new turbos from turning to lava. All standard stuff for a high-hp Porsche. So why was this car able to go so fast it would leave you with Casper’s knuckles? Gearing, and drag. Most tuners use the stock gears, or shorten them for better acceleration. But 9ff put in taller 5th and 6th cogs. Notice the big drop in RPM in the video. 9ff also set the TR1000’s aerodynamics to “slippery”. While stupid for road-racing, for V-Max it’s key.

The cost is €130,000 ($187,000) in addition to the price of a stock 997. That’s a lot of money for a Porsche with 1000hp. The recent explosion in high-end tuning means you could probably get that power for less. This year EVOMS built a car that did 231mph in a standing mile (Click to watch it), and with a longer road, who knows? Regardless, 9ff was the first shop to build a Porsche and take it to the altitude of SCC Aeros and Veyrons, not to mention it was still accelerating up to the curve! The 9ff TR1000 is a Porsche that can keep up with, or beat, the world’s most exclusive hyper-cars, at a fraction of their cost. I can only hope a U.S. shop decides to give chase. An international Battle Royale of Porsche-tuning would be worth learning German for.