Just 10 years ago, the idea of Audi producing a mid-engined supercar bordered on preposterous. After all, Audi parent Volkswagen already had Lamborghini in its stable, and was hard at work on what would become the Bugatti Veyron, so what was the point? Well, point or no point, the Audi R8 has been quite successful for the interlocking rings brand, so it shouldn’t be surprising that the company has cooked up this new second-generation model. 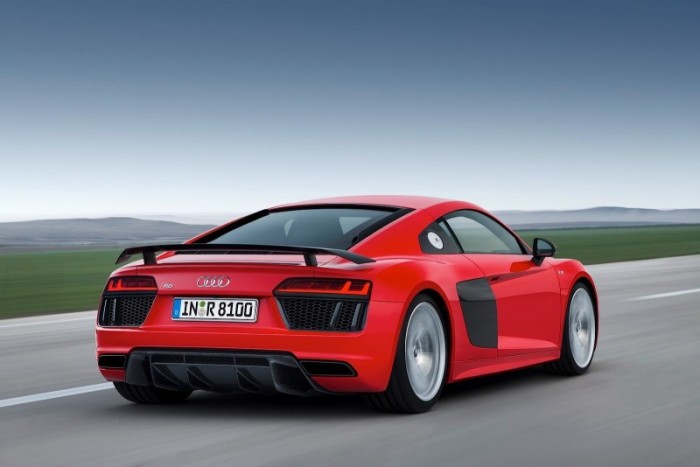 While the overall shape (particularly the greenhouse) doesn’t look all that different from that of the original, many of the details are quite different. The nose features current corporate face, with an angular grille and headlights, plus additional openings below those headlights (which, if you live outside the U.S., will be offered in laser-illuminated form) for cooling. The prior R8 coupe’s trademark – and controversial – side blades are no more, now being split into separate pieces adorning the quarter panel engine air scoops and the rear sail panel trim (though they are still finished in black or silver, at least as an option). In the rear the hard-edged lights and vents party continues, while the returning V10 Plus model features a fixed rear wing. 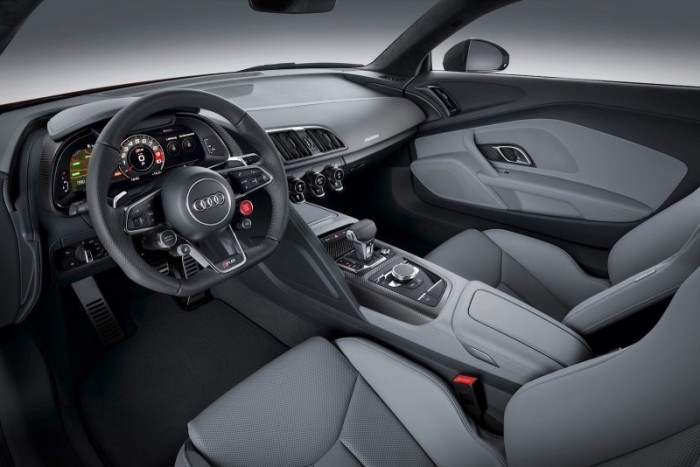 And V10-power is all you’ll be able to get in the new R8, at least initially. The 5.2L V10 (based almost entirely on the one found in the Lamborghini Huracan) features both direct and port fuel injection, and it produces 532 horsepower and 398 lb.-ft of torque in the “base” model, while the V10 Plus is rated at 602 horsepower and 413 lb.-ft. Both versions send their strength to all four wheels through a *sigh* 7-speed dual-clutch transmission. (Vaya con Dios, V8 and stick shift…) A new R8 LMS GT3 racecar and an all-electric R8 e-tron (with 92 kilowatt-hour’s worth of batteries to drive a pair of motors to produce a combined 456 horsepower and 679 lb.-ft of torque and deliver a claimed range of about 280 miles) are currently receiving their finishing touches and will be revealed in full sometime later.

As for performance, Audi says the regular R8 V10 will scoot to 62 mph in 3.5 seconds on its way to a 201 mph top speed, while the V10 Plus will hit 62 mph in 3.2 seconds and max out at 205 mph. European prices will start at 165,000 euros, or about $184,800, for the standard V10, though we expect U.S. prices to be a bit lower when it arrives here sometime in the fall. Once that happens, expect the American supercar landscape to be turned upside down, just like it was eight years ago… 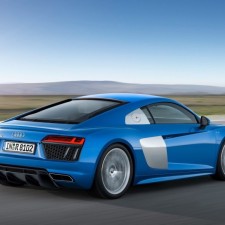 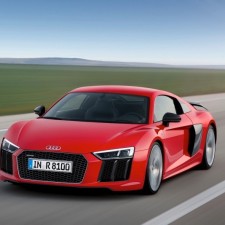 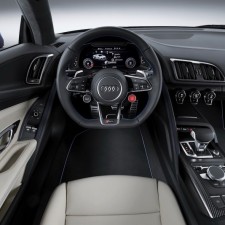