The Tesla Model S is a hugely impressive automobile, one that’s able to give its gas-powered super sedan rivals some serious headaches. But now it appears headaches aren’t enough for Tesla Motors CEO Elon Musk and his merry band of electric car crafters; they want to bludgeon their dino-juice-drinking rivals. And they plan to do that bludgeoning with the D…

Low-hanging comedic fruit out of the way, the D in question is actually the D version of the Model S, the “D” standing for dual. Yes, children, this baby has two electric motors: One for the front wheels, and one for the rears. And like the rear-drive, single-motor Model S, the D model is available in three levels of strength: The 60D, the 85D and P85D. The 60D and 85D have slightly less total power than their simpler siblings (376 horsepower versus 380) because they use the same 188 horsepower motors at both ends, but they also boast faster acceleration, higher top speeds, and even better range (225 and 295 miles, respectively, an increase of 10 miles in both instances) than their 2WD equivalents. 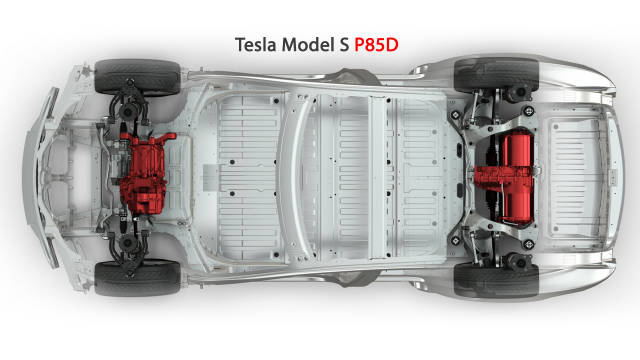 However, those achievements are put in the shade by the P85D’s stats. Thanks to a more powerful front motor and the same 470 horsepower rear motor as the regular P85, combined output is a nutso 691 horsepower and 687 lb.-ft of torque, 0-60 mph takes a claimed 3.2 seconds (lobbing exactly one second off the rear-drive P85’s time), and the top speed is capped at 155 mph (versus 130 for the P85). Yeah, range suffers a bit (275 miles rather than 285), but those sums shame most supercars, never mind most super sedans (The P85D also has perfect 50:50 weight distribution and can pull 1 g in the turns.). In fact, Tesla says it’s the quickest production sedan in history. Panamera Turbo S owners, you have been served!

But the AWD Model S triplets have something no currently-produced supercar has: The ability to partially drive themselves. Thanks to an array of cameras and a 360° sonar system (which, incidentally, has been installed in every Model S built since two weeks ago), Tesla’s new whip can not only slow down and even brake to a stop in traffic, but it can also observe speed limits, follow the curves of a road, and evenperform its own lane changes; all the driver has to do is flick the turn signal stalk to indicate which adjacent lane he or she wants to enter. And thanks to regular software updates, the Model S should be able to eventually drive itself completely; the only real barrier at the moment is government legislation (or lack thereof). Thankfully, the day of the autonomous Model S won’t be quite as far away come February, which is when D-series Model S deliveries are scheduled to begin.