Although Enzo Ferrari and company built the first Ferrari-badged car in 1947, it would be another seven years before Prancing-Horse-wearing rides started being imported to the United States on an official basis. But our market’s impact on Ferrari products was immediate and far-reaching, as the company’s American agent – Luigi Chinetti, a former racing driver and good friend of Mr. Ferrari – convinced Il Commendatore to build cars with larger displacement, torque-richer V12 engines and larger, more flamboyant bodies crafted by some of Italy’s top coachbuilders to broaden the brand’s appeal over here. Sixty years on, it’s clear that that strategy worked out pretty well for all involved.

Yes, it’s been 60 years since the first Ferrari shipped directly to the U.S. put tires to dock, and to celebrate, the company is holding a rather awesome block party this Sunday on Rodeo Drive in downtown Beverly Hills, California. On display will be 60 (of course) road and race Ferraris from all different eras, including some one-offs like the F50 GT,which would have raced against the likes of the Mercedes-Benz CLK-GTR and Porsche 911 GT1 had the program not been canceled. But there will be one additional new Ferrari being shown: The F60 America. 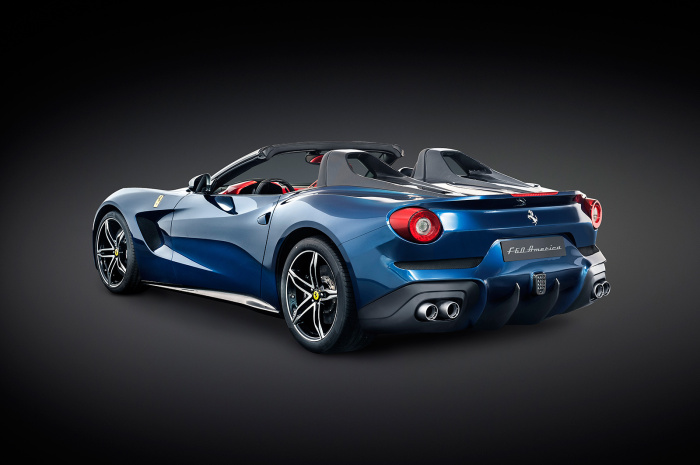 Based on the F12 Berlinetta, the F60 America retains that car’s wailing 730 horsepower 6.3L V12 and 7-speed dual-clutch transmission, but does away with its fixed roof in favor of a manually-installed fabric top that’s only guaranteed to stay intact at speeds up to 75 mph; if you want to explore the speedometer’s upper limits, you’ll have to leave youurself, your sole passenger (if you have one) and the stylized twin carbon fiber roll hoops out in the breeze. On the plus side, leaving the top off lets onlookers check out the unique, wildly-colored interior, which pairs a red driver seat with a black passenger seat, and both seats feature a Stars-and-Stripes motif down the middle. Outside, the reshaped bodywork is clad in dark blue with a white stripe running all along the top surfaces. All in all, it’s a vivacious homage to Ferrari in America, as well as Chinetti’s famous racing division, North American Racing Team (NART to its friends.). 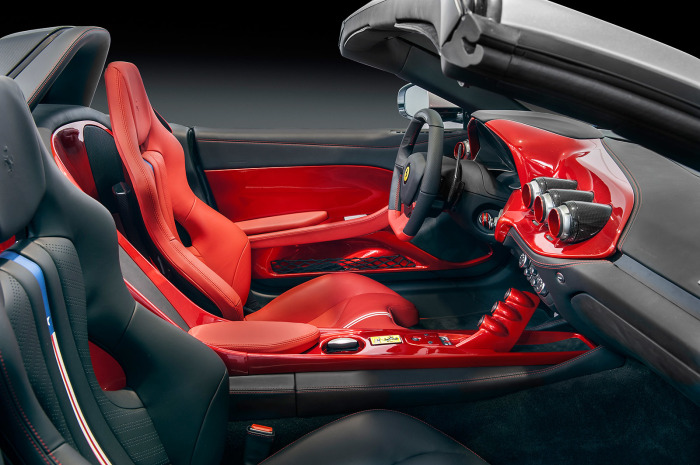 Alas, it’s an homage very, very few will get to enjoy firsthand; like the 275 GTS4 NART Spider of 1967, the F60 America’s production run is strictly limited to 10 units. And like pretty much every limited edition Ferrari in recent memory, they sold out prior to the public unveiling. We say that’s all the more reason to get your backside to the 90210 this weekend if you can.