November brings shorter days, cooler weather and a massive culling of the American turkey population. It also brings car manufacturers from far and wide here to Southern California for the Los Angeles Auto Show. We’re proud to say that our local show seems to be growing in international stature each year, and the 2014 iteration continues that growth, as numerous vehicles made their world debuts.

Naturally, we were there, Rockports-on-the-ground yesterday for the second of three media days. And in between McDreamy sightings and chowing down on free hors d’oeuvres and adult beverages, we managed to come up with a list of the 10 premieres that impressed us the most. That list is as follows… 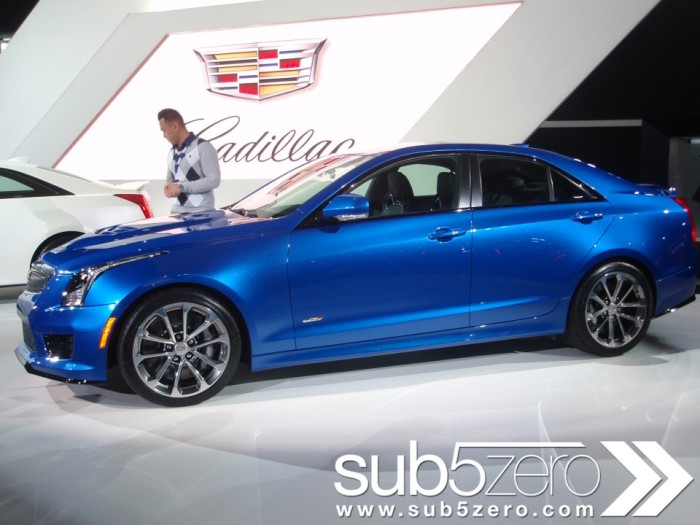 With a smaller size and sportier demeanor than the third-generation Cadillac CTS, it was only a matter of time before its smaller sibling – the ATS – gained a hot-sauce V version. And the ATS-V (which, like the regular ATS, is available in both coupe and sedan bodystyles) is hot like ghost-chili-infused Sriracha: The vented hood covers a thumping 3.6L twin-turbo V6 that’s rated at an M3/M4-drubbing 455 horsepower and 445 lb.-ft of torque, and teams with either an 8-speed automatic or 6-speed manual transmission (the latter featuring such electronic doodads as automatic rev-matching on downshifts and a no-lift shift function) to send power to the rear wheels. Cadillac projects a 0-60 mph time of just 3.9 seconds and a top speed in the vicinity of 185 mph, which should be fast enough to chase down members of the German super sedan and super coupe brigade as they run home crying to Mutti.

Yeah, we know including two versions of the same car can be construed as cheating, but both new Jaguar F-Type drivetrain permutations debuting in L.A. deserve mentioning. The first addition to the family (which was already teased last week) is all-wheel-drive, which will be available on V6-powered S and V8-powered R versions of both the coupe and the roadster (Yes, there will be a 550 horsepower R Roadster, which will also be available in rear-drive and apparently replace the totally-weaksauce 495 horsepower V8 S Roadster.).

The second variation, which we most certainly were not expecting to show up at our hometown show, was highly-anticipated, repeatedly-requested manual transmission version of Jaguar’s sportster. The company says the ZF-supplied 6-speed stick and its associated hardware were meticulously refined to create the purest, most engaging driving experience possible. However, said driving experience can only be enjoyed in rear-drive Fs (again, both the open and enclosed bodies) powered by the 3.0L supercharged V6 (i.e. the base and S models). Still…F*CK YEAH MANUAL F-TYPE! 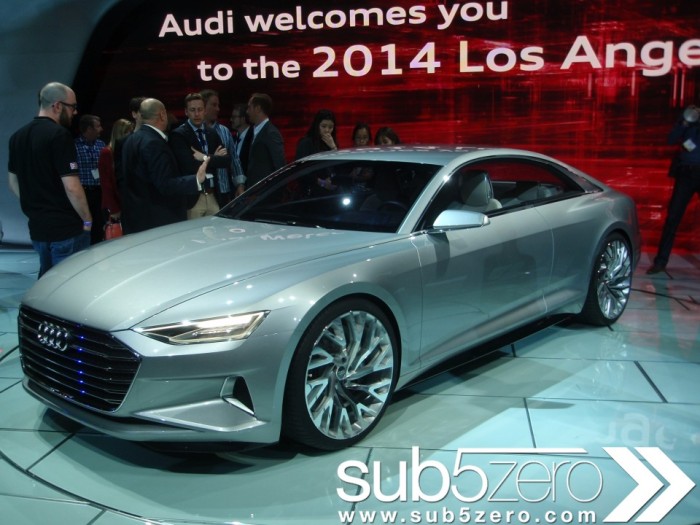 Audi has been building distinctively handsome cars and SUVs since before the turn of the century, and whenever the time comes to update the range, there’s always a part of us that worries the design team in Ingolstadt will club most or all of the Audi model family with the ol’ ugly stick. Thankfully, it looks like those fears are once again unfounded, because the Audi Prologue Concept – a big, luxurious hardtop coupe – looks phenomenal. And we reckon its performance qualifies as phenomenal too, with an extra-hot 605 horsepower version of the company’s 4.0L twin-turbo V8 sending power to all four wheels. Look for the Prologue Concept to heavily influence the appearance of the next generation A6, A7 and A8 ranges as they show up over the next couple of years. 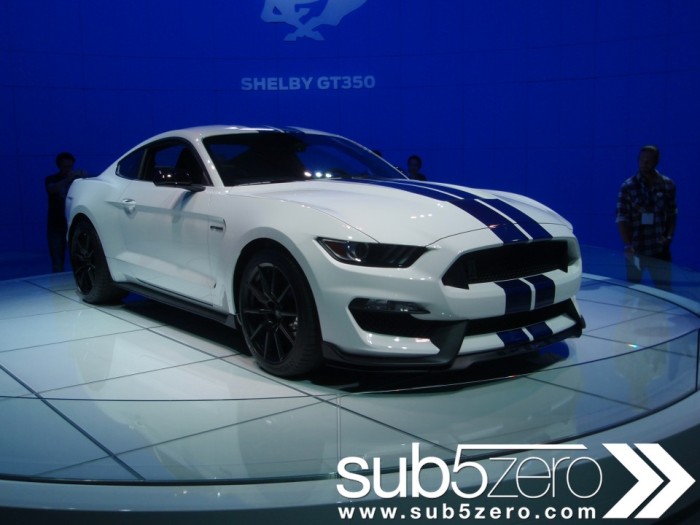 Rather than creating a new tire-ionizing GT500 that’s at least as guano as the Dodge Challenger SRT Hellcat, Ford and its SVT skunkworks have instead decided to go after the Chevrolet Camaro Z/28 by building a naturally-aspirated, handling-oriented Mustang for track rats. And what they’ve come up with – the 2016 Ford Shelby GT350 Mustang – certainly has all the ingredients to make the canyon-carving-est Camaro’s life miserable. The aggressive bodywork features wider front fenders to accommodate a wider front track, while the super-sharp suspension is available with magnetorheological dampers, a Ford production vehicle first.

The other noteworthy Ford first is under the hood, deep within the bowels of the 5.2L V8; it’s a supercar-style flat-plane crankshaft, which translates to a distinctive exhaust note, a lofty redline, and a whole lot of power. Quite how much power is currently a mystery: Ford will only say that it will pass more than 500 horsepower and more than 400 lb.-ft of torque along to the mandatory 6-speed manual transmission. Looks like it’s now up to Dodge and SRT to deliver a modern-day Challenger T/A, preferably one that’s been on a strict diet… 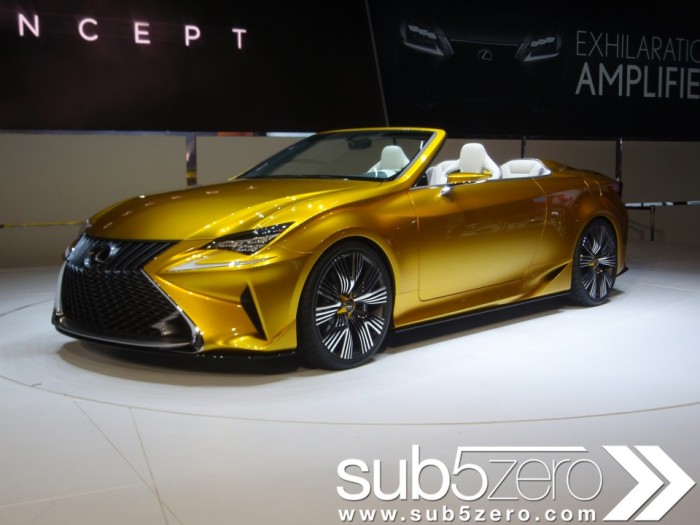 With the first fixed-roof Lexus coupe in over a decade – the RC – now part of the lineup, it would make sense that the Japanese luxury label is at least contemplating hacking the top off it to create a convertible version. Well if the Lexus LF-C2 Concept is any indication, they’re seriously contemplating it. In fact, they’re so serious, they didn’t even bother giving this dream car any roof at all! We’re guessing a production RC convertible will be revealed sometime next year, likely as a 2016 model. 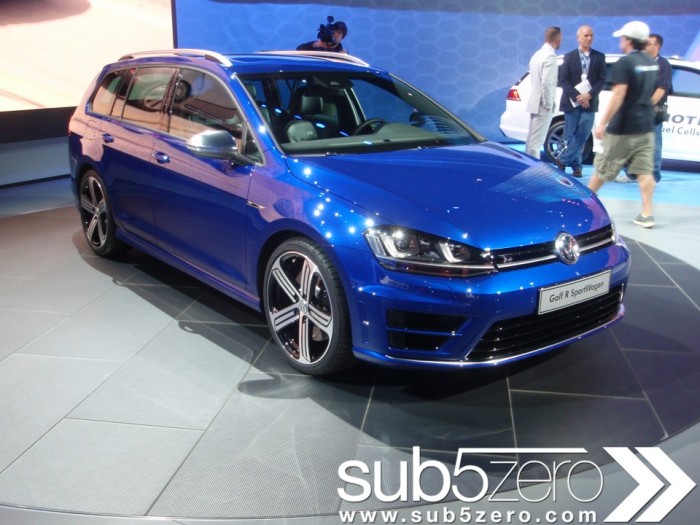 Did you go to high school with an impossibly-hot girl who was always getting sent to the principal’s office for dressing like an escort but never, ever put out and, as if to pour one final 5-gallon bucket of salt in the wound, joined a convent right after graduation? Volkswagen at the 2014 Los Angeles Auto Show is that girl. Oh sure, the Volkswagen Golf R Variant (read: station wagon) is making its world debut here, 296 horsepower 2.0L turbo inline-four, AWD and all, and yeah, the regular Golf Variant (or Golf SportWagen as it’s known here) and the R version of the Mk. 7 Golf hatchback are both already or soon will be offered here. But given America’s recent track record with regard to embracing high performance station wagons (or any station wagons, for that matter), we’d say you’re more likely to be fatally mauled by a banana slug than someday be able to walk into a U.S. Volkswagen dealer and purchase a Golf R wagon. We hope like hell that we’re wrong, but we’re not going to set ourselves up for disappointment, either. 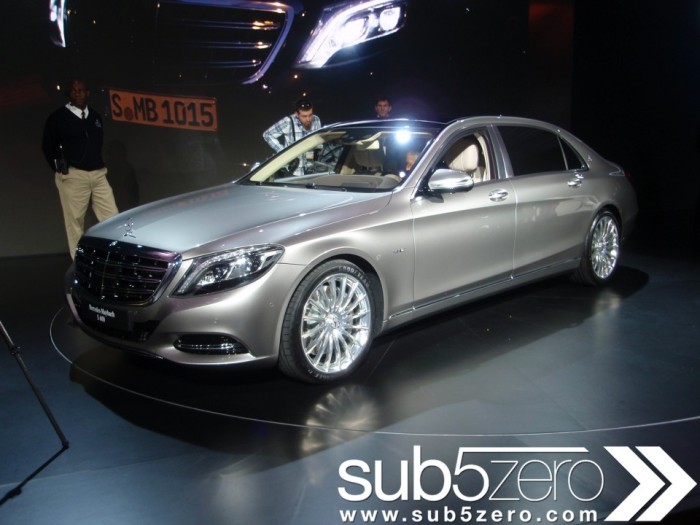 Daimler’s attempt at reviving the Maybach nameplate (which went away just before World War II) as a standalone brand may have ended in disappointment, but it wasn’t enough to discourage the company from applying the name to a new super-luxury version of the Mercedes-Benz S600 sedan (Of course, for all we know, they could have had their hearts set on calling it the “S600 Brougham” right until the point it bombed with the customer focus groups.). Officially dubbed the Mercedes-Maybach S600 (which tells us there are additional Mercedes-Maybach vehicles coming down the pike), this factory limo is a full 8.1” longer than the long-wheelbase S-Class sedan (which is the only version available over here); as you would expect, nearly all of that length (7.9” to be exact) is added between the B-pillars and the rear wheel openings, making for a positively cavernous rear seat area, where you’ll find a pair of ultra-adjustable, ultra-comfy private-jet-esque chairs, a full-length center console, and stuff like fold-out tables and front-seatback-mounted monitors that help you work hard and play hard. Throw in the same 6.0L twin-turbo V12 generating 523 horsepower and 612 lb.-ft of torque as the “lesser” S600 and you have a prestige car that should have Bentley and Rolls-Royce glancing over their shoulders. 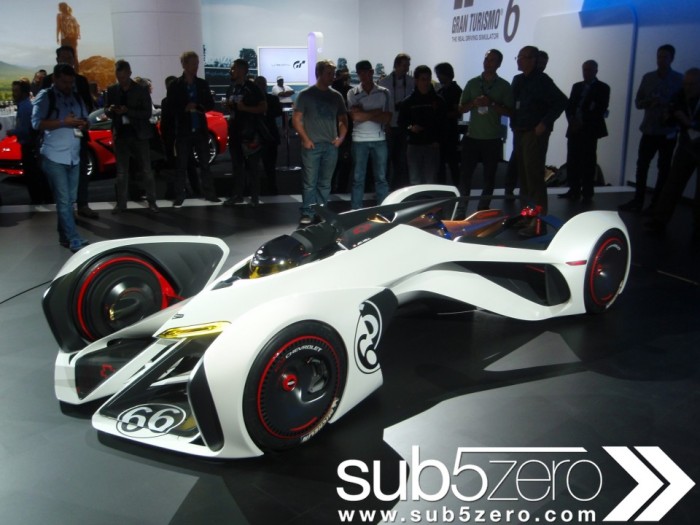 Between 1963 and 1970, Texas-based Chaparral Cars and the company’s driver/designer/engineer/co-owner Jim Hall built the most radical and innovative sports prototype racecars ever seen on the tracks of the United States Road Racing Championship, the World Sportscar Championship and the Canadian-American Challenge Cup. Monocoque chassis construction incorporating composite materials, wind-tunnel-verified aerodynamics and even on-board data acquisition are all standard motorsports practices today, and all were pioneered on Chaparral’s stark white Chevrolet-powered speed machines.

So it was only natural that when Gran Turismo creator Kazunori Yamauchi asked GM Design to submit an entry to the Vision Gran Turismo festival for Gran Turismo 6, Ed Welburn and his team (with input from Hall) came up with a the Chevrolet Chaparral 2X Vision Gran Turismo Concept, a late-21st (or maybe early-22nd) century interpretation of a Chaparral. The driver actually lies belly-down and head-forward, making this thing like a sort of motorized wingsuit for the ground. And that motorization comes not from something as mundane as a pushrod V8 or turbocharged V6, but a laser-powered thrust engine (A brief, fairly-easy-to-understand explanation of how one of those works can be found here.). Chevrolet says the thruster provides enough power to get the car up to about 240 mph, but we surpassed 290 mph in a GT6 demo they had set up at their booth. The rest of the GT6player community will be able to experience the 2X in game sometime during the holiday season, though we did overhear Yamauchi-san answer in the affirmative to a fellow journalist’s mention of December. 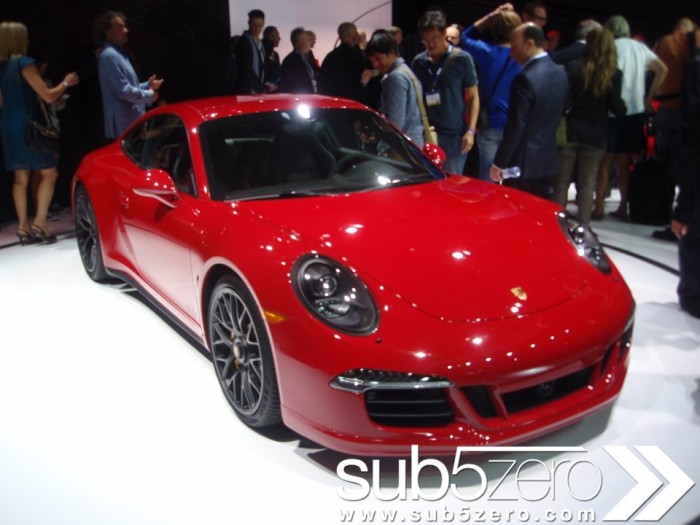 Although Jaguar’s expansion of the F-Type range is quite impressive, they still have a long way to go before they catch up to the proliferation of the F clan’s arch foe, the Porsche 911. And Porsche chose the 2014 Los Angeles Auto Showto premiere another four remixes of the 911: The 911 Carrera GTS Coupe, 911 Carrera GTS Cabriolet, and AWD Carrera 4 GTS versions of both. The GTS features the wider Carrera 4 rear fenders (even on the rear-drive models), a revised front bumper, GTS labels throughout and, oh yes, 30 extra horsepower from the Carrera S’s 3.8L flat-six (for a total of 430 horsepower). It’s a welcome stepping stone from the Carrera S to the GT3 and Turbo, and one that we’re sure will find many happy homes. 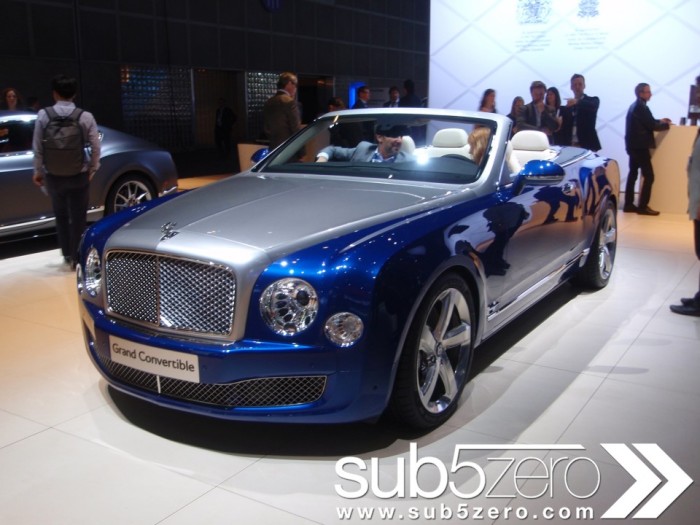 Officially, the Bentley Grand Convertible is still just a concept car. But the fact that it was displayed right alongside the company’s production models and unlocked so us car scribes could hop in and check out the palatial interior strongly suggests this droptop dreadnaught won’t be a one-off much longer. A massive 530 horsepower and gargantuan 811 lb.-ft of torque comes from the same 6.7L twin-turbo V8 found in the Mulsanne Speed on which this behemoth is based. Come on, Bentley; just drop the act so everyone – including you – can relax and be happy.