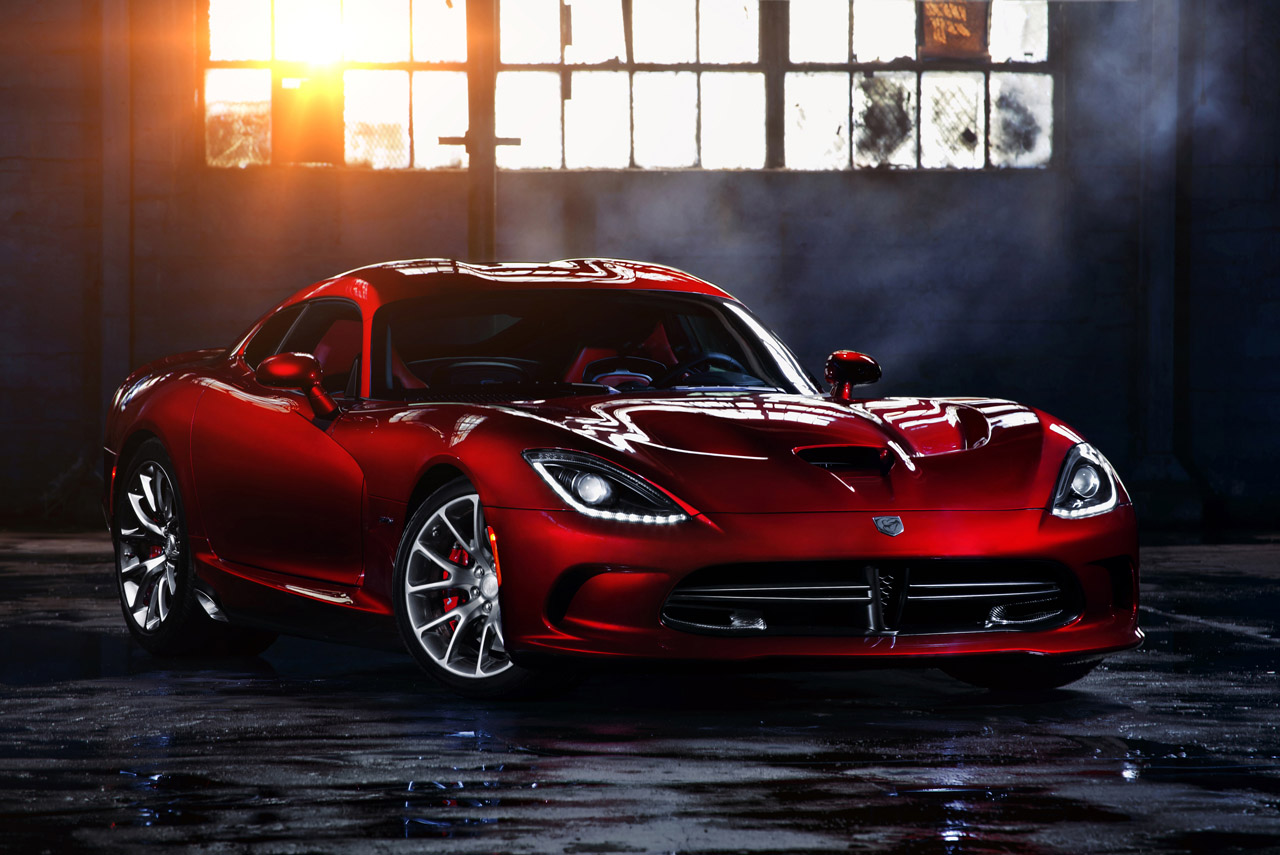 The first two generations of the Dodge Viper (Some sources break those two generations into two further generations.) were brash, brutal and downright angry. These thundering 10-cylinder neo-Cobras, both open- and closed-top, routinely beat up on all manner of European supercars, not to mention crosstown rival Corvette. What’s more, these beating occurred on the street and on the track, the latter being where race-prepped Vipers scored numerous wins, including three consecutive GT class wins at the 24 Hours of Le Mans and the overall win at the 2000 24 Hours of Daytona.

However, the Dodge Viper’s story came to an end on July 1, 2010, as the last example rolled out of the Conner Avenue Assembly plant in Detroit. Scarcely two months later, though, word came down that a new third (or fifth; take your pick) generation Viper would be coming in a couple years. Well, now it’s a couple years later, and the new Viper is indeed here. A lot has stayed the same with the new car, but a lot has changed, too. 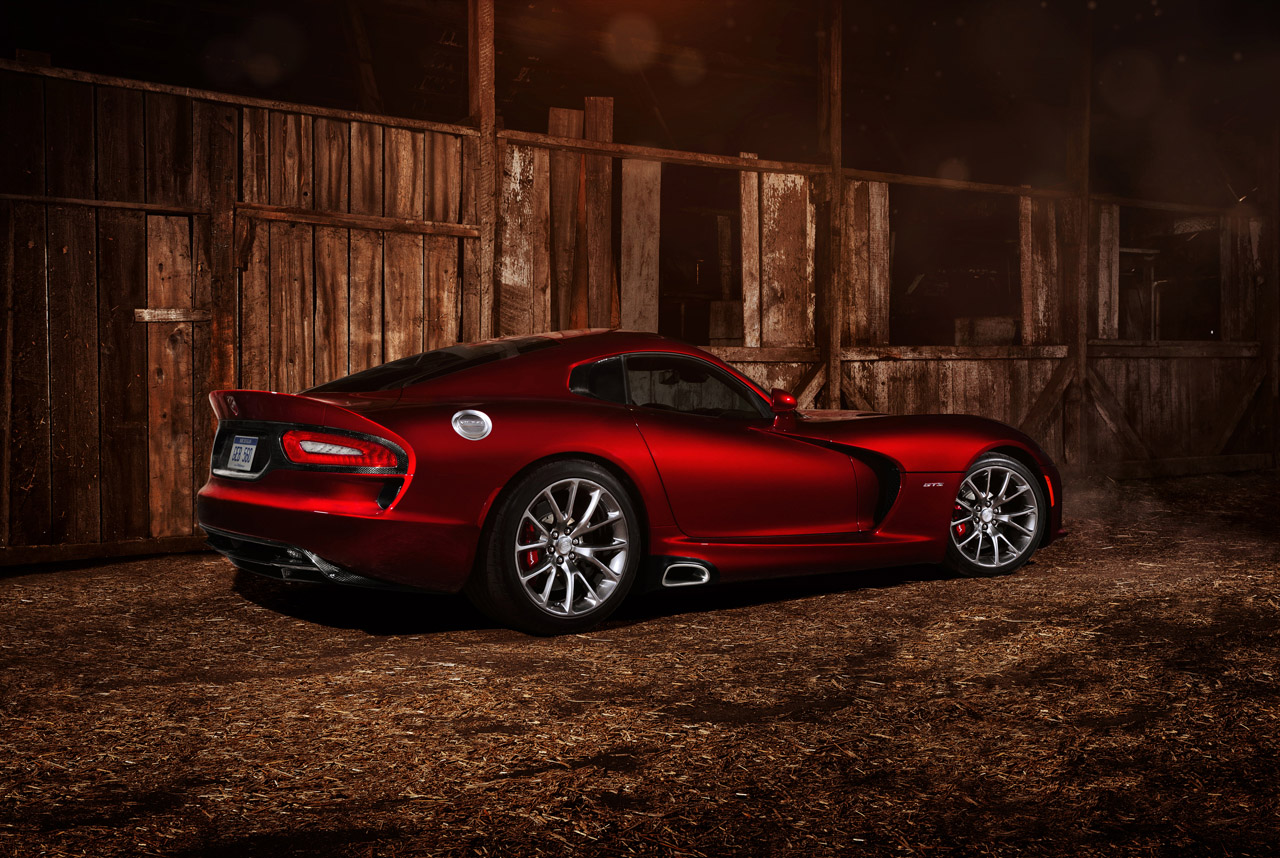 The biggest and most obvious change is the brand that sells the Viper. Chrysler’s psychotic serpent is the first vehicle that will be marketed solely under the Street and Racing Technology (SRT) banner, which until now has merely been a sub-brand attached to high-zoot Dodge, Chrysler and Jeep models. No word if the folks in Auburn Hills have started a “Dodge jar,” into which anyone who calls the new Viper the D-word must deposit money…

Another significant change is the fact that the coupe body style is debuting first; in fact, there hasn’t even been confirmation of a convertible version. The overall proportions are definitely recognizable as those of a Viper, as are certain styling cues like the gaping side vents, integral rear spoiler, and Zagato-esque double-bubble roof. But if you ask us, there’s a lot of Italian to be found in this American badass, something that may or may not be a result of Fiat’s majority ownership of Chrysler. The headlights, as well as the grille and scoop shapes and layouts, carry more than a hint of Ferrari, while the taillights could be easily mistaken for the ones on the Maserati GranTurismo. We aren’t complaining, per se; we just find it a little off-putting. 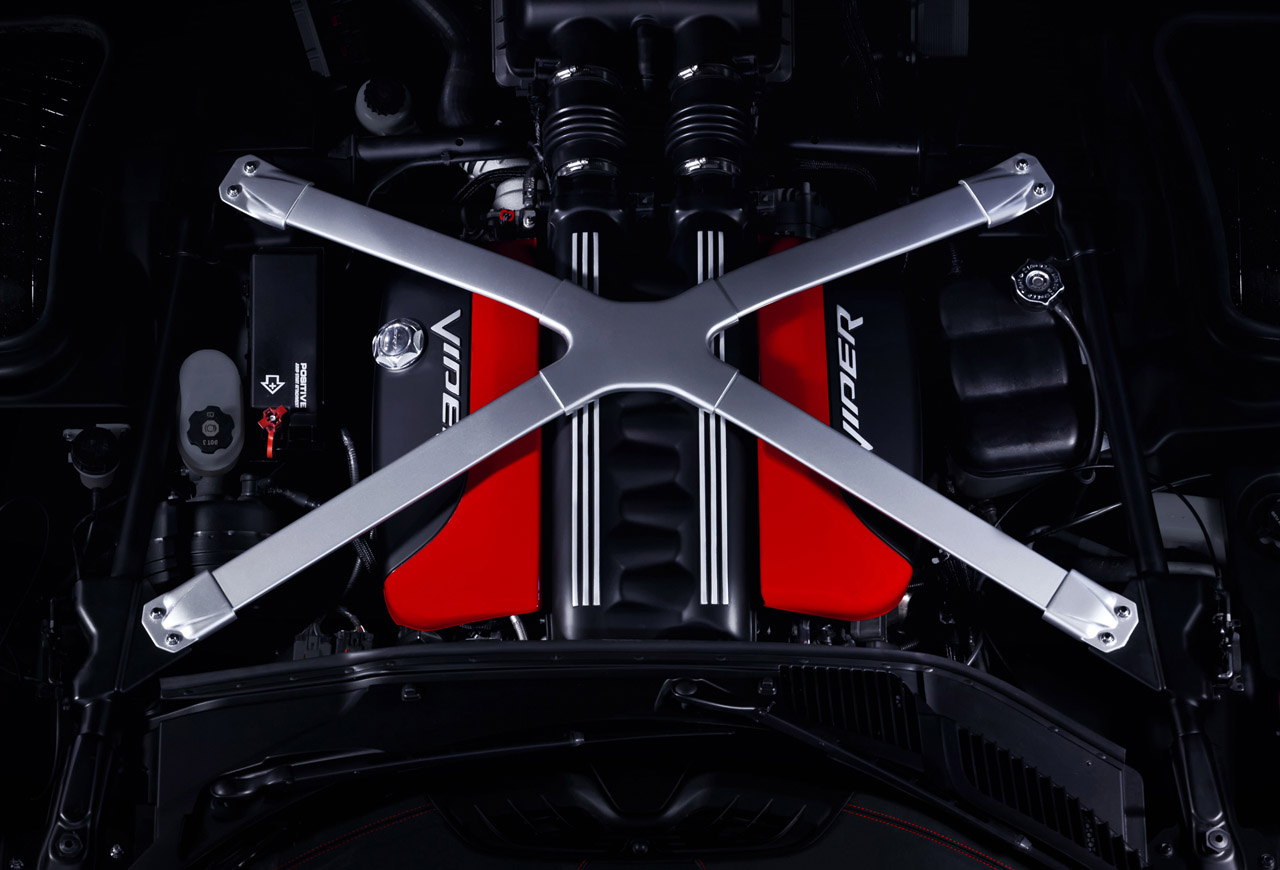 We are not, however, put off by what resides under that sinewy skin. Under the big hood (which, like the 1992-2002 original’s, is a clamshell design) sits an evolution of the prior generation’s 8.4L all-aluminum pushrod V10. Improvements like a light, high-flow composite intake manifold, forged pistons, sodium-filled exhaust valves and lower-restriction catalytic converters result in a giggle-summoning 640hp and 600 lb.-ft of torque, the latter figure being a record for a normally-aspirated production car engine. The transmission is once again the beefy Tremec TR6060 6-speed manual, but the shifter throws and the final drive ratio have both been shortened, and the gear ratios are more closely spaced. Translation: Sixth gear is now the one used to reach top speed, rather than acting as an overdrive.

Naturally, the SRT engineers haven’t forgotten that Viper owners also need to take corners every now and then. In light of this, they added an X-brace on top of the engine, which helps contribute to the claimed 50% increase in chassis stiffness over the 2010 Viper. The rear suspension has been redesigned, and there are mammoth Pirelli P Zero tires (295mm treadwidth in front, 355mm in back) at each corner. There’s also a new four-channel anti-lock brake system and, by order of Uncle Sam, traction and stability control, both Viper firsts. However, SRT boss Ralph Gilles says both the traction and stability control systems can be completely turned off (assuming you took your brave pills beforehand, of course). 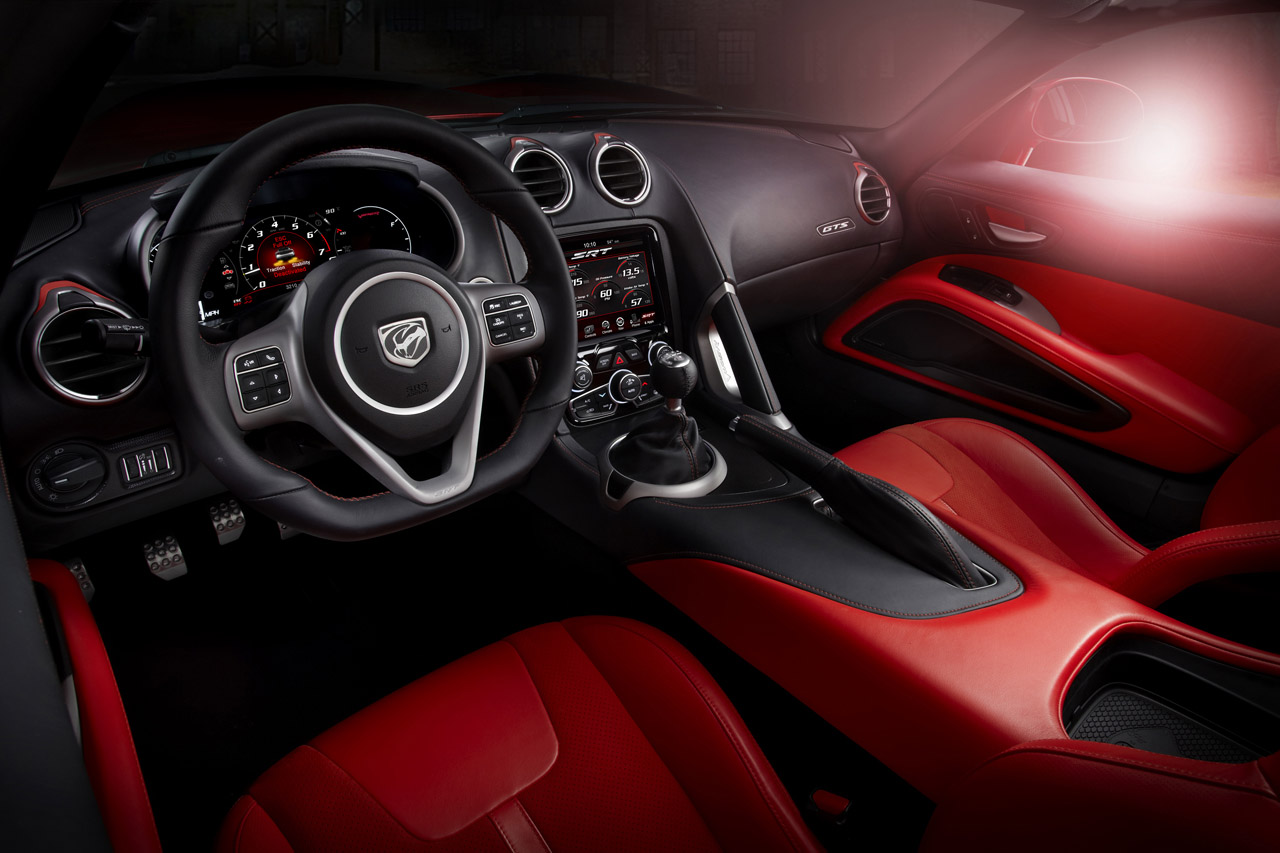 In another break with tradition, the Viper will be offered in two flavors: The base version, and the GTS, which adds creature comforts like Bilstein electronically-adjustable damping, leather interior trim, power seats and an 18-speaker Harmon Kardon surround sound system with Logic 7 processing. Both trims, however, include Chrysler’s Uconnect Access telematics system featuring an 8.4” in-dash touchscreen.

But people don’t buy Vipers for the amount of processing power in the cabin; no, they buy Vipers to go fast. And the new one should certainly do that. SRT hasn’t released official performance specs yet, but based on the car’s 4.9 lbs. per horsepower figure (better than the Lamborghini Aventador and arch foe Corvette ZR1), as well as a steering-wheel-mounted launch control button, we’re guessing 0-60 mph runs will take about three seconds on the way to a top speed slightly above 200 mph. Not too shabby. 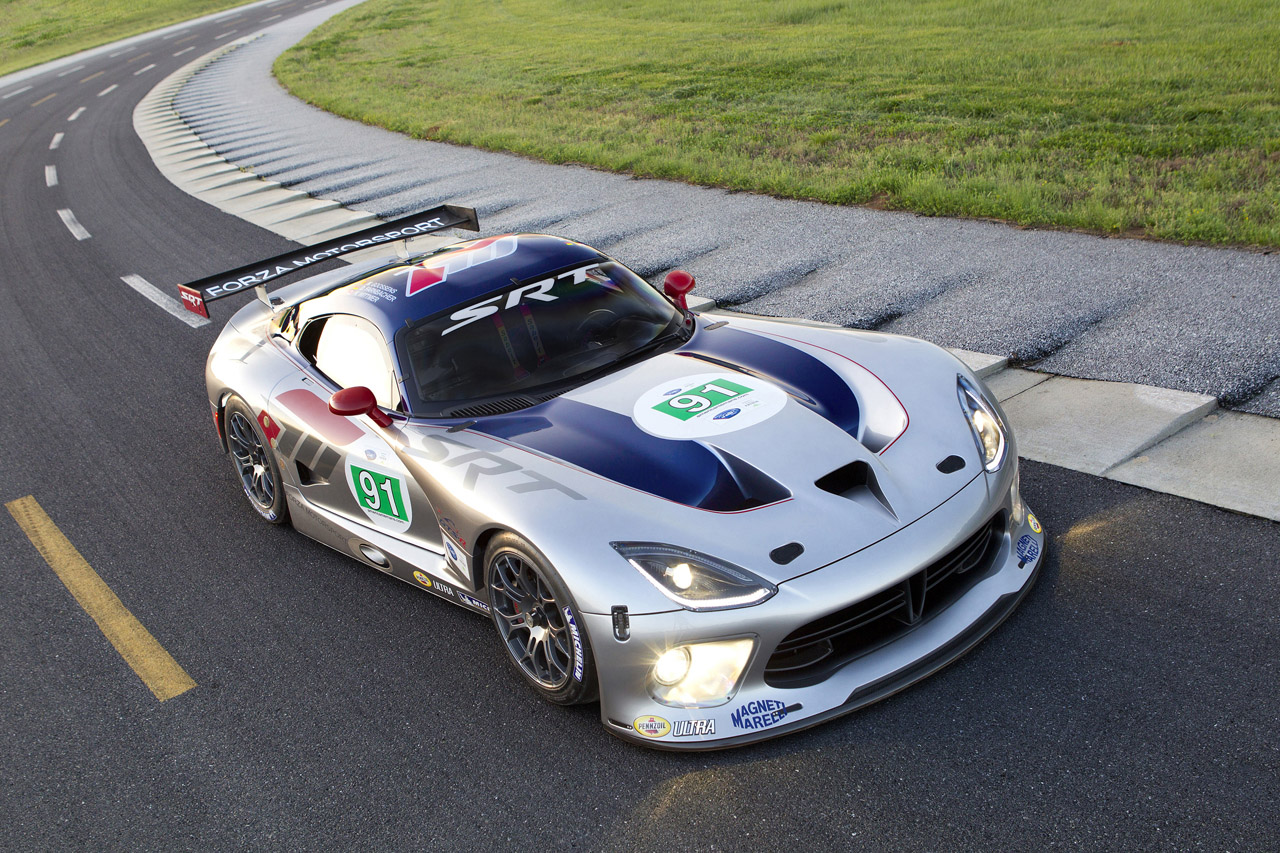 The Viper’s racing resume, as mentioned before, isn’t too shabby either. That resume is set to expand later this year, when a pair of factory-backed Viper GTS-Rs (constructed and campaigned by Riley Technologies) will take on Corvette, Porsche, BMW, Lotus and, oddly enough, Ferrari in the American Le Mans Series GT class. Sports car aces Marc Goosens, Dominik Farnbacher and Kuno Wittmer, plus Izod IndyCar Series star Ryan Hunter-Reay, will attempt to build on the legacy of the turn-of-the-century Viper Team Oreca squad with these new silver-and-blue machines (one of which is pictured above) powered by special 8.0L V10 engines (which required special permission from the rulemakers, since the biggest engine allowed under the current Automobile Club de l’Ouest GT regulations is 5.5L).

Not one of those four aforementioned pro drivers, nor do you have the $100,000+ the street version will likely retail for? Not a problem: SRT worked with Turn 10 Studios, the makers of Forza Motorsport 4, to create a digital version of the ’13 Viper GTS for that game that should be available for download sometime this summer. You can see it (and the real thing) in action in the videos below, plus loads more pictures. Who loves ya, baby?