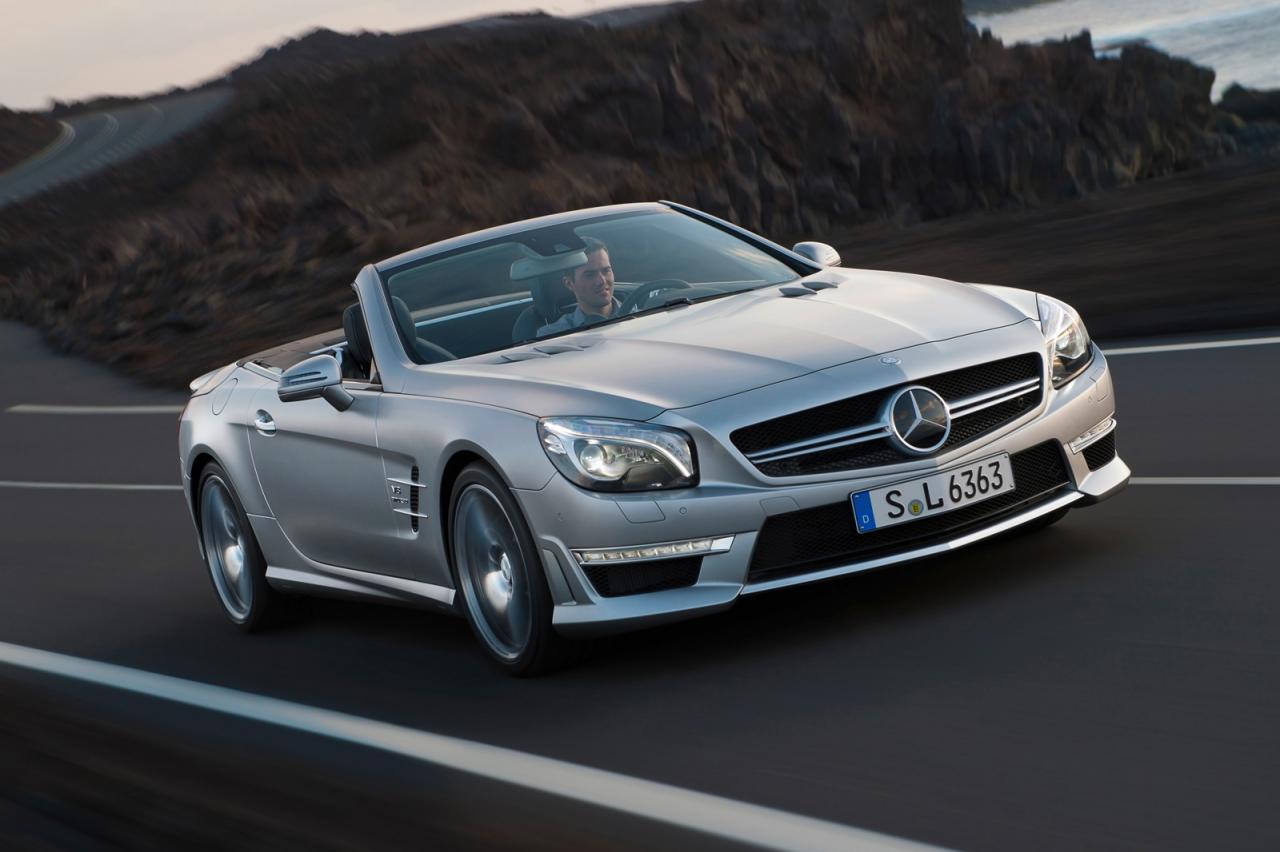 The R230 chassis Mercedes-Benz SL55 AMG was the first AMG-fortified SL to be produced in significant volumes and the first to be exported to North America (The V12-powered R129 chassis SL60 AMG and SL73 AMG, as well as the normally aspirated R129 SL55 AMG, were neither.). It also helped introduce thousands of buyers worldwide to the brilliant combination of a snappy forced-induction V8, retractable hardtop, and performance oriented suspension tuning, and the sales figures reflected that.

Fast forward about a decade, and Mercedes-Benz and its in-house tuner are taking the hot dog V8 SL back to that winning formula by switching back to a blower-fed engine. But it’s also moving the model into the future by slashing the curb weight by a significant amount. The result is the silver super roadster you see here, the 2013 SL63 AMG. 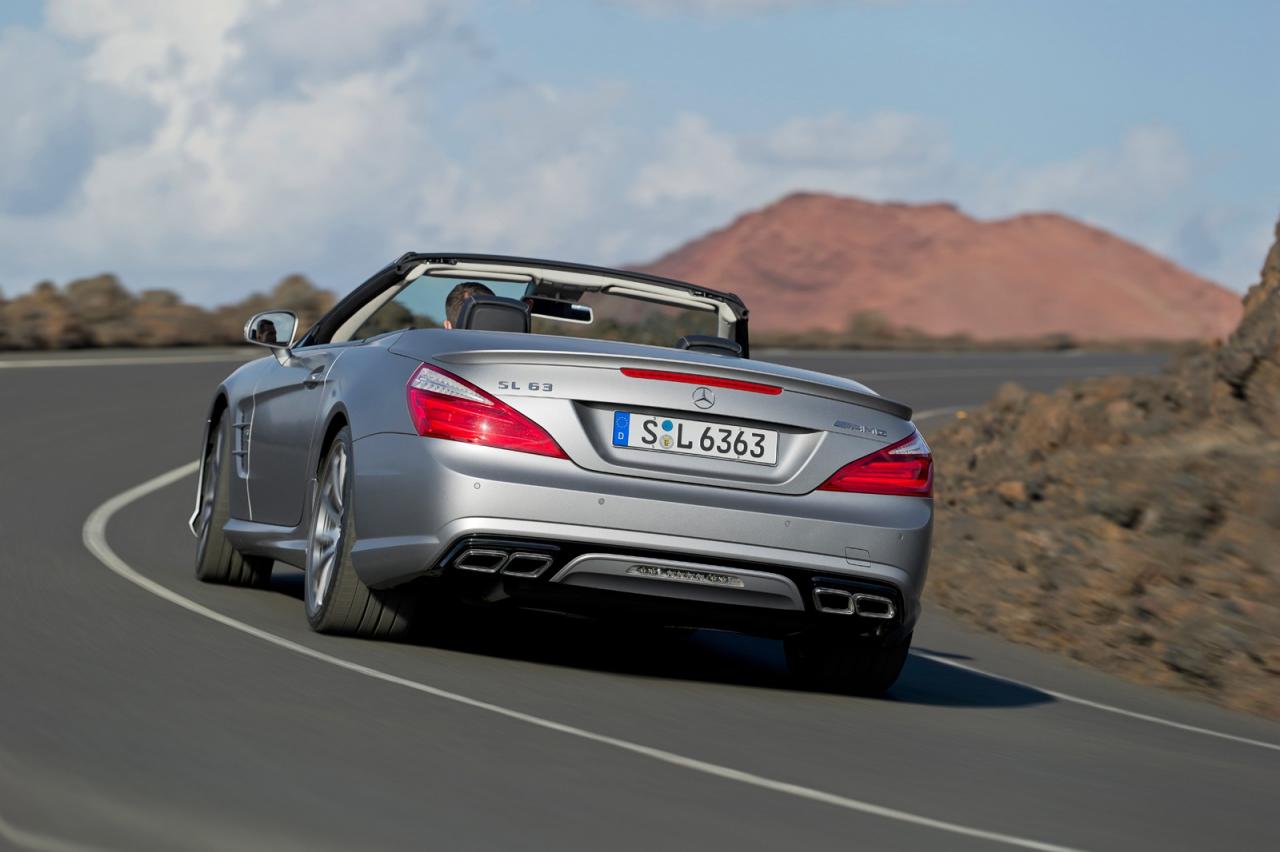 Based on the new R231 SL, which only just debuted last month in Detroit, Stuttgart’s new origami-roof grander tourer weighs quite a few pounds less (276 of them, if you’re into specifics) than the old SL63. This is mostly due to the R231 SL being the most aluminum-intensive production car Mercedes-Benz has yet made, while many of the bits that aren’t aluminum are magnesium. This trimmer shell is wrapped in shapely bodywork that is distinguished from the more mild mannered members of the SL clan by more aggressively styled bumpers and side skirts, a rear lip spoiler, quad tailpipes, AMG exclusive 19” alloy wheels (20” rears are included with the optional AMG Performance Studio matte black set), and badges on the front fenders and trunklid.

Of course, style isn’t the primary ingredient of an AMG Benz; that honor is reserved for boosted performance, and the new SL63 is no different. The preceding model’s 6.2L atmo V8 gives way to AMG’s new 5.5L twin-turbo V8, and it’s matched with AMG’s Speedshift MCT 7-speed automatic transmission. In standard form, output is 529hp and 590 lb.-ft of torque, but if you order the AMG Performance Package, the figures climb to 556hp and a stonking 664 lb.-ft. Naturally, the suspension and brakes have also been beefed up, the latter offering the carbon ceramic units from the SLS AMG as an option. 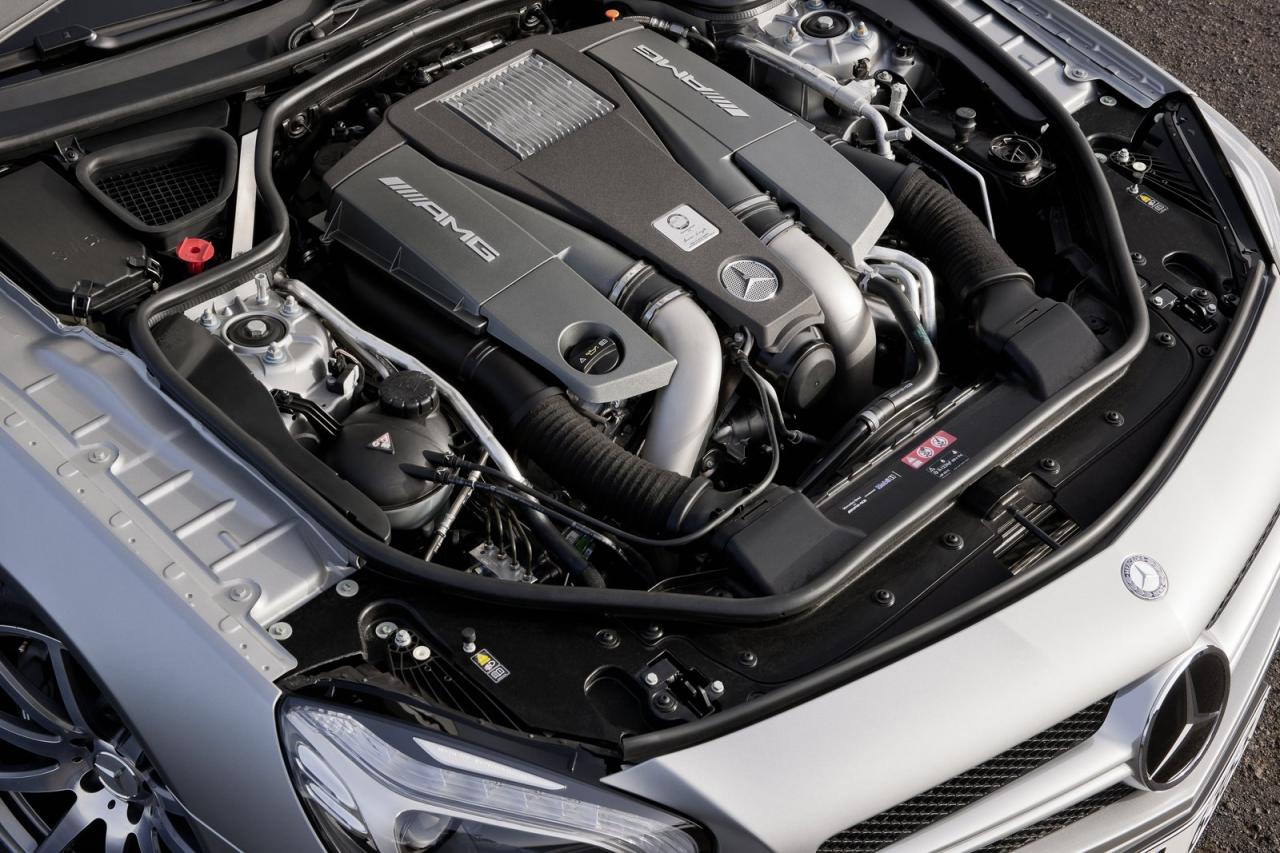 If you’re expecting outrageous performance figures to go with those outrageous power figures, the SL63 doesn’t disappoint. Mercedes-Benz says it will dash to 62 mph from a stop in 4.3 seconds, or 4.2 seconds with the Performance Package. Top speed is electronically limited to 155 mph on the standard car, while the digital Jiminy Cricket in Performance Package cars doesn’t yank your collar ‘til 186 mph. Unremarkable, say you? Consider that both versions of the new SL63 returned just under 24 U.S. miles per gallon on the European combined testing cycle, or a 30% improvement over the 2011 model. Apparently you actually can have your Kuche and eat it too.

Of course, a dessert this amazing commands the kind of money the kind of money that would buy you a lifetime supply of Ho Hos. The basic model will hit German showrooms in May at a price of 157,675 euros, or about $211,000 (though keep in mind that this and all the other announced figures include the Fatherland’s 19% value-added tax). The special “Edition 1” model will retail for 189,269.50 euros (roughly $253,000), and the AMG Performance package will add 4,280 euros (about $5,700) to the tab of either. Not cheap by most folks’ metrics, but for a performance car that’s comfortable year-round and fairly economical, it’s a pretty good value. That being said, we’re guessing most of you will only be able to experience this baby through pictures and videos, which is why we’ve included these. Why? Because we care about you, you big lugs.