For most Americans, the waning days of November mean turkey, family, football, and engaging in the animalistic ritual of overnight clearance shopping. For car nuts, late November means it’s time for the Los Angeles Auto Show. As has been the case for the last few years, the 2013 edition of the L.A. Auto Show was host to numerous significant debuts. However, we’ve managed to cut through all the redesigned grilles and stripe-and-decal packages to bring you the newest of the new and coolest of the cool. Here, in no particular order, are 10 of the vehicles that we believe meet (if not exceed) that criteria. 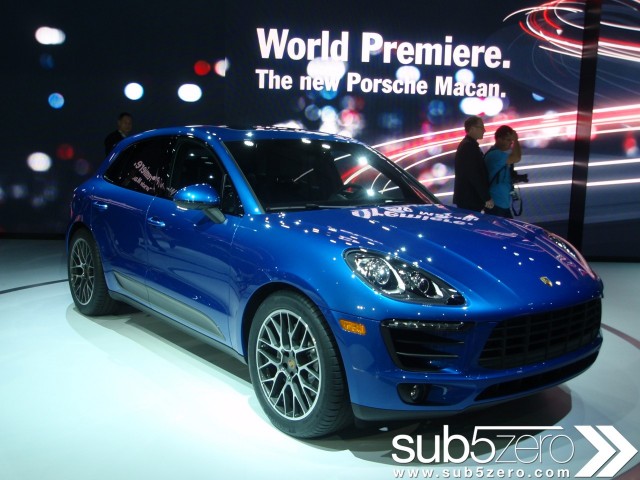 When Porsche introduced the original Cayenne, it signaled to the world that the Porsche brand was no longer just about sports cars. This reinvention of sorts opened the door for the company’s first production sedan (the Panamera) a few years later and, now, a brand new baby brother for the Cayenne called the Macan (which is apparently derived from the Indonesian word for “tiger”). There’s certainly a strong family resemblance in terms of looks, but the powertrain menu looks quite different.

Initially, there will only be two models: The Macan S, powered by a 3.0L twin-turbo V6 making 340 horsepower, and the Macan Turbo with a 3.6L twin-turbo V6 rated at 400 horsepower. Both models come standard with a 7-speed PDK transmission and all-wheel-drive. No word yet on pricing or when they go on sale, but when they do reach showrooms, you’d better believe they’re going to be a red-hot commodity (at least in our neck of the woods). 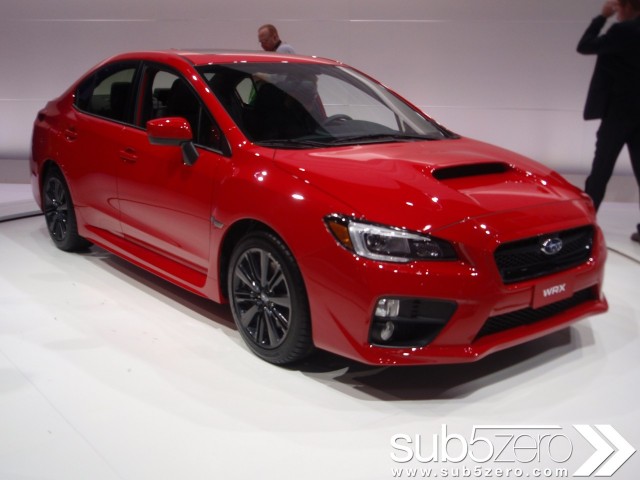 The current generation Subaru WRX – the turbocharged beefcake version of the humble Impreza – hasn’t actually been around since the McKinley Administration, but when pitted against fresher, more polished competitors like the Volkswagen Golf R and Ford Focus ST, it might as well have been. Fortunately, Subaru has cooked up a new one for the 2015 model year.

Yeah, we know, the styling is something of a snoozefest (especially compared to the concept version that debuted in New York back in March), and there are no plans for a hatchback/wagon version, but it’s got the goods where it counts. Namely, it’s got a turbocharged and intercooled 2.0L flat-four (based on the BRZ’s non-turbo 2.0L) under the hood producing 268 horsepower and 258 lb.-ft of torque. All-wheel-drive is, of course, standard, as is a 6-speed manual transmission.

However, in a move that might actually be even more facepalm-worthy than the tepid looks (We happen to adore sleepers, thank-you-very-much.) is the optional non-gearbox; yes, boys and girls, the new WRX’s self-shift option is a CVT. That’s not so bad, you say? Well, chew on this: Subaru confesses the CVT will add 0.5 second to the 6-speed’s 0-60 mph time, and reduce EPA estimated fuel economy by 2 mpg and 3 mpg in the city and on the highway, respectively. Seriously, unless you lack a left leg and/or a right arm, or you’re more uncoordinated than a newborn fawn on a Crisco-coated ice rink, stick with the stick, ‘kay? 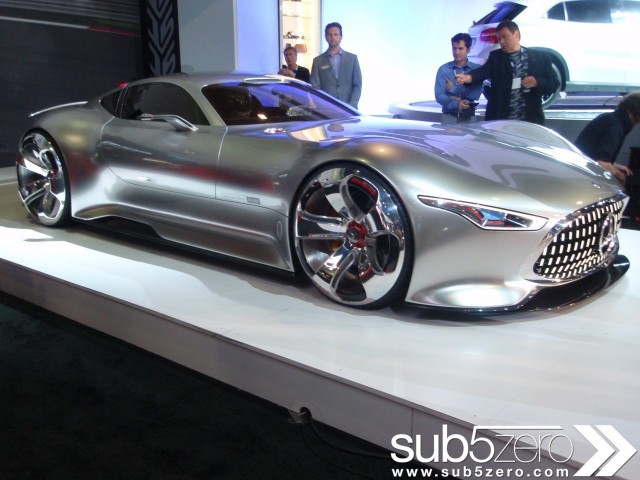 About six months ago, when Gran Turismo 6 had its first major meet-and-greet with the outside world, quite a lot of fuss was made about how more than a dozen world class brands (both automotive and otherwise) had signed on to design futuristic grand tourers to be digitalized and incorporated into the game. Well, the scheduled release of GT6 is a mere two weeks away, and Mercedes-Benz has become the first nameplate to pull back the curtain on its contribution to the project: The Mercedes-Benz AMG Vision Gran Turismo concept.

The long, low shape features a fastback roofline, bulging fenders and, of course, gullwing doors, while locomotion (at least in the drivable virtual version; what you see here is a full-size mockup) is achieved via AMG’s mighty M157 5.5L twin-turbo V8. It makes the same 577 horsepower and 590 lb.-ft of torque that it does in the latest E63 AMG S-Model (among others), although the AMG Vision Gran Turismo weighs just 3,053 lbs. thanks to extensive use of aluminum and carbon fiber. And before you ask, no, it’s strictly a concept car and, yes, we too think it looks way better than both the SLS and the SLR McLaren. 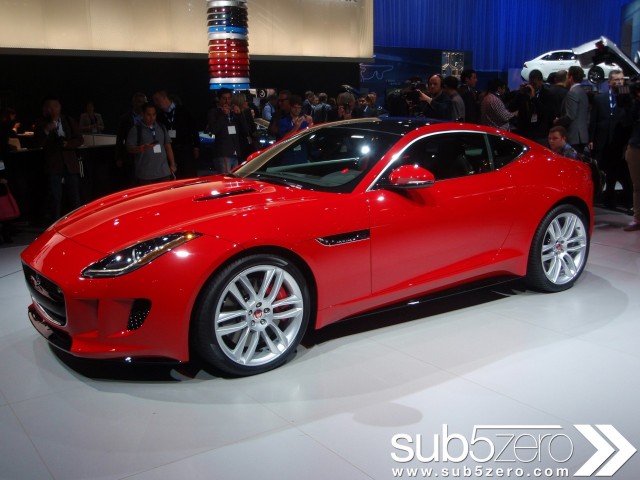 What’s more shocking that it took Jaguar almost 40 years to get back into the roadster market? The fact that they chose to introduce that roadster – the F-Type –before the fixed-roof coupe version, that’s what. And the fact that the concept car that presaged the F-Type – the C-X16 – was a coupe only added to the head-scratch quotient.

Now, though, Jaguar is ready to cut through the confusion with the F-Type Coupe. As you’d expect, it utilizes the same supercharged 3.0L V6 engine (in two states of tune – 340 horsepower and 380 horsepower) and same 8-speed automatic transmission as the open-top model. There are, however, two big differences from the roadsters. The first is that there is no 495 horsepower V8 S version of the coupe; instead, there’s the F-Type R, which uses Jaguar’s top-spec 550 horsepower supercharged 5.0L V8. The other major difference, of course, is that voluptuously-sloped and sculpted greenhouse and handy (albeit startlingly narrow) hatchback boot lid which, somewhat disappointingly, is hinged at the top like every other hatchback under the sun rather than on the side like on the C-X16 and the E-Type coupes. 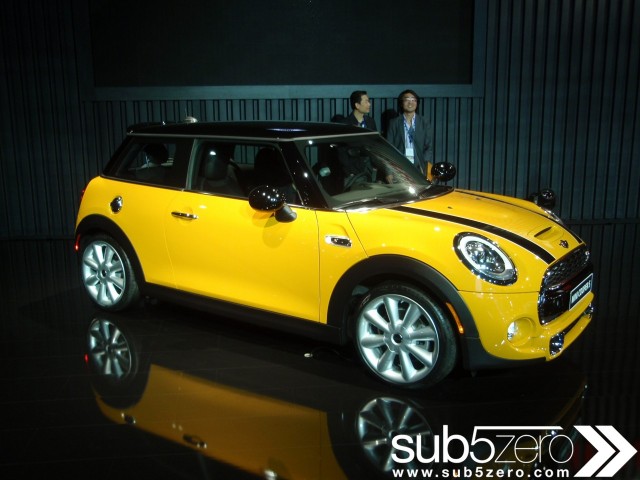 Although the original Mini was produced without any dramatic alterations for over 40 years (from 1959 to 2000), BMW has just introduced its third generation of “new” Mini in the last dozen years. This latest iteration of the “regular” Mini (i.e. three-door hatchback) is, not surprisingly, the chunkiest one yet, with another 4.5” of overall length and a taller, squarer snout. But it’s still easily recognizable as a Mini.

As before, the U.S. will be getting the top two models: The Cooper and the Cooper S. The former ditches its predecessors’ naturally-aspirated inline-fours for the BMW i8’s turbocharged 1.5L inline-three (rated at 134 horsepower for Mini duty), while the latter uses a turbocharged 2.0L four (presumably borrowed from the BMW 320i) making 189 horsepower. Both the Cooper and Cooper S come standard with a 6-speed manual transmission, while a 6-speed automatic is optional on either. We’re gonna go out on a limb and predict that all four combinations will be a hoot to drive, particularly the standard-shift Cooper S. 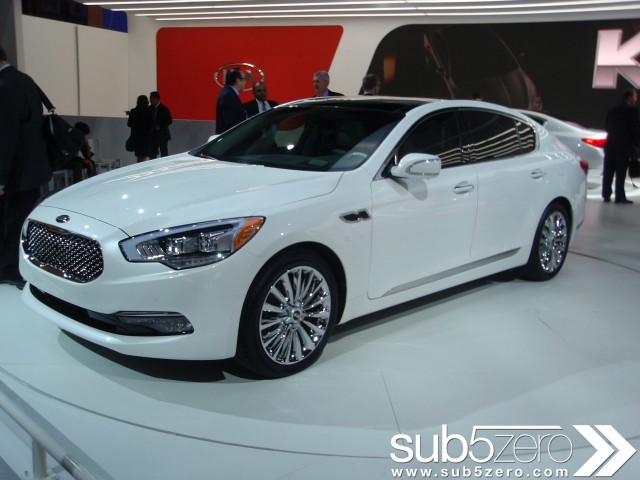 When Kia unveiled its first self-badged car, the Sephia, to U.S. buyers in 1994 (remembering that the Ford Festiva and Aspire were made by Kia), more than a few people reckoned they would follow the same route Daihatsu did a few years earlier: Make some noise early on, then retreat tail-between-legs about a half-decade later. Certainly, even the plucky Korean label’s most ardent supporters couldn’t picture it ever building a big, V8-powered, rear-drive luxury sedan. However, just as corporate cousin Hyundai did eventually do after starting in America with the wretched first-gen Excel, Kia is ready to complete its climb from crackhouse to penthouse with the superb K900.

Based on the aforementioned super Hyundai – the Equus – though it may be (sharing its wheelbase and front and rear track widths, in fact), the K900 differs in that it actually settles for V6 power in the base version (not that a 3.8L V6 with 311 horsepower feels much like settling). But it’s the corporate 5.0L “Tau” V8 making 429 horsepower that has our tongues wagging. Both engines route their power rearward through an 8-speed automatic trans. Combine all that with a palatial interior, exterior styling that manages to be both contemporary and classy, and a base price expected to be a bit lower than the Equus’ $61,000 basement, and you have a mighty attractive luxury sedan proposition. We just hope the badge snobs don’t pass it by like they have the Equus and the VW Phaeton. 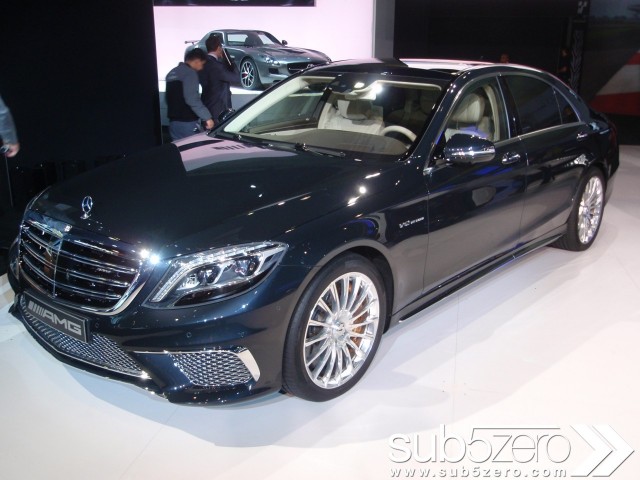 While many automakers seem to be locked in a battle to switch as many models as they can to downsized force-induction engines, AMG just laughs and keeps on building twin-turbo V12s. The latest recipient of this 6.0L mountain of a motor is the third generation S65 AMG, based on the new W222 S-Class. Peak output? Certainly. Stomp on the go pedal and 621 horsepower and 738 lb.-ft of torque blast you to 60 mph in 4.2 seconds, while optional carbon-ceramic brakes help bring you back to a standstill in similarly PDQ fashion. And because this new super luxo-barge has a 7-speed automatic transmission (The old S65 AMG had a 5-speed auto.), response to jabs of the throttle and fuel economy should both improve slightly. And you’ll probably have to be slightly rich to get your hands on one; expect the MSRP to be north of $200,000 when it hits dealers this coming spring. 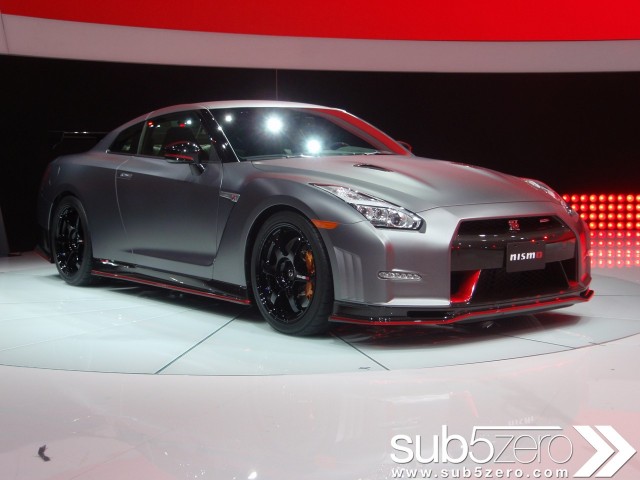 The Nissan stand at the L.A. Auto Show features a trio of Nismo-fortified rides: The production Juke Nismo RS, the sweet Sentra Nismo Concept (Perhaps an heir to the Sentra SE-R’s throne is on the way?), and the GT-R Nismo, which made its simultaneous debut at the Tokyo Motor Show. In case you missed it earlier in the week, the GT-R Nismo is Godzilla-gone-guano. The 3.8L twin-turbo V6 has been upgraded to yield a nice, round 600 horsepower, while the suspension has been tweaked to provide sharper responses, and that aggressive body kit adds more than 200 lbs. of downforce at 186 mph. No word yet on performance figures, but if we had to guess, they’ll be ridiculous. 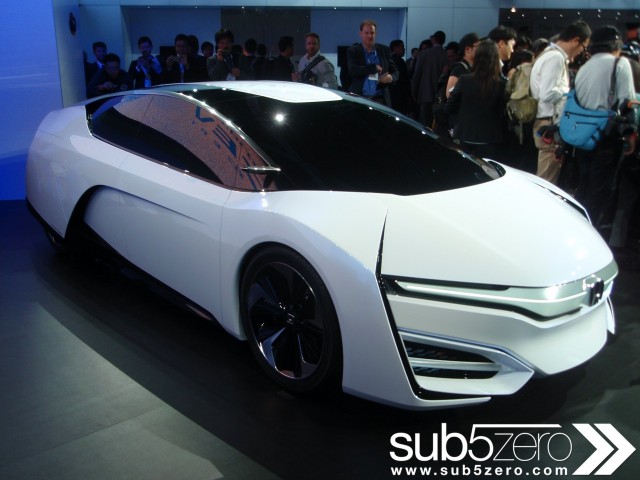 Plug-in hybrids and fully-electric cars have been dominating the green car discussion lately, but don’t rule out fuel cell EVs just yet. Honda has been doing a lot of R & D work on the technology since it rolled out the “production” FCX Clarity in 2008, and one of the results is the spacey-looking conveyance you see here, the FCEV Concept. Honda says the wild styling only offers a potential design direction for the FCX Clarity’s replacement (which is scheduled to arrive in 2015), but that’s not the most significant part of this eco-conscious ride.

Instead, the big news is in the powertrain. The FCEV’s fuel cell stack has a 60% greater power density than the one in the Clarity, and as a result takes up 33% less space. Honda says the FCEV’s hydrogen tank can be completely filled in as little as three minutes, and a full tank of Element #1 should be able to take the FCEV 300 miles. It will be interesting to see how much of this concept car makes it into the car that will eventually be made available to the public. 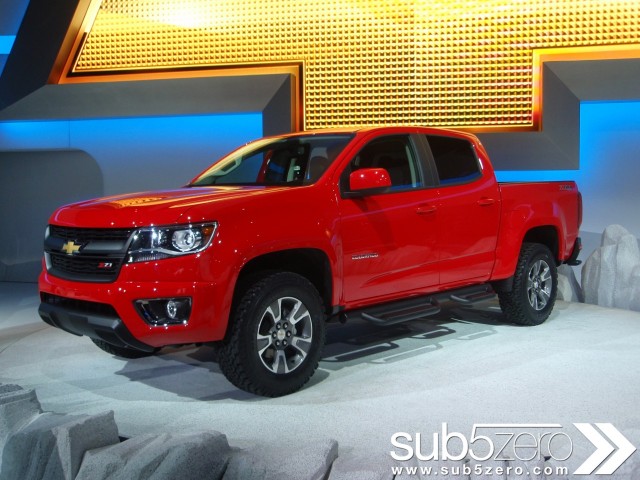 In the last few years, the Detroit Three have each abandoned the American compact/mid-size pickup truck market due to a perceived drop in demand and the manufacturers’ ability (or lack thereof) to turn a profit on them. But GM is not only getting back in the game, but going all-in with all-new Chevrolet and GMC (but retaining the names – Colorado and Canyon, respectively – of their predecessors) mid-size trucks based on the company’s global pickup platform.

The Chevrolet Colorado received the honor of first-to-bow, and when it hits dealers roughly 12 months from now, it will be offered in two cab sizes, two bed sizes, two- and four-wheel-drive, and two gas engines cribbed from the General’s passenger car range: A 193 horsepower 2.5L inline-four and a 302 horsepower 3.6L V6. However, coming about a year after that is the powertrain option that has us jumping for joy: A 2.8L Duramax turbodiesel inline-four. Hopefully many, many of you will come to realize that when it comes to pickups, bigger doesn’t always equal better.