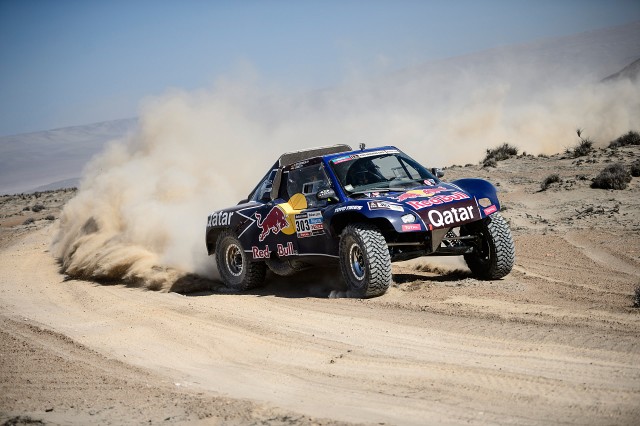 The earliest motor races were as much adventures as they were speed contests. Drivers (and, in most cases, riding mechanics) often dashed hundreds of miles from town to town across open countryside, battling not only other competitors, but also the elements, the condition of the roads (if you could call a rutted, lumpy, unpaved horse trail or cart path a road), and the ever-present specter of mechanical failure. Combine these hazards with essentially zero safety precautions and you start to wonder if the first race car drivers made clanking noises when they scratched their wedding vegetables.

These days, of course, racing is the safest and most sanitized it’s ever been. That’s good for all parties involved, but it also means much of the sport’s danger and romance is gone. Racing has ceased to be – if you’ll excuse our use of a worn-down-to-the-cords term – epic. But this doesn’t mean all racing in the 21st century is a watered-down shadow of its former self. There is one notable motor race that still requires man and machine to be in peak fitness, as well as participants to have nerves and gonads of steel. That race, of course, is the Dakar Rally, and so far the 2013 edition has been one for the ages. 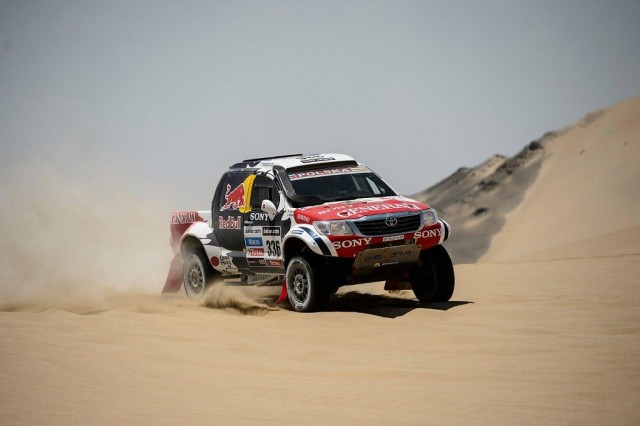 Although the race originally ran between southwestern Europe and northern Africa (though not in the Mediterranean Sea that lies between…obviously), terrorism concerns prompted organizers to relocate the event to South America beginning with the 2009 running. This year’s running began in Lima – the capital of Peru – on January 5, with over 400 motorcycles, ATVs, cars and trucks setting off on a journey of almost 5,000 miles. After the short first stage in the dunes outside Lima, the field headed out into the Peruvian desert for the first “proper” tests. 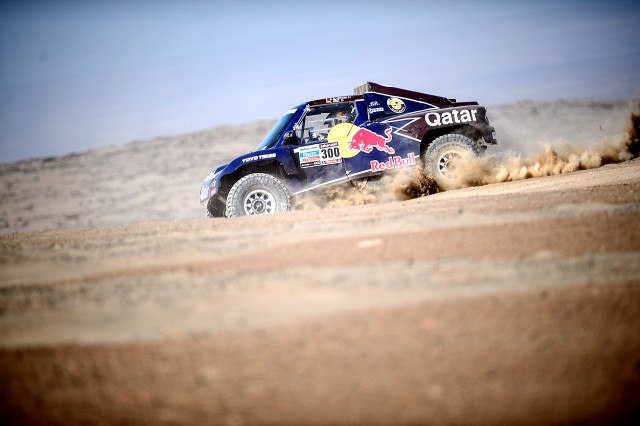 In the car class, the Qatar Red Bull Rally Team driving duo of Nasser Al-Attiyah(above) and Carlos Sainz (both former Dakar winners, as well as two WRC titles for Sainz) were fast in their brand new American-built, GM LS-series V8 powered buggies, but both have fallen victim to teething troubles, with Sainz dropping out on Stage 6 with engine failure and Al-Attiyah seemingly suffering at least every non-terminal mechanical woe under the sun at least once. Another perennial contender, former NASCAR and IndyCar star Robby Gordon, flipped his Hummer going over a dune on Stage 4, basically ending his chances for overall victory, though he has managed to take a handful of stage wins in the past few days as the rally has wound its way through Argentina and into Chile. Meanwhile, serenely leading the car category is 10-time Dakar winner Stephane Peterhansel in his Mini Countryman X-Raid. It would take a major catastrophe for the Frenchman to lose the race with only one stage left to run at this writing. 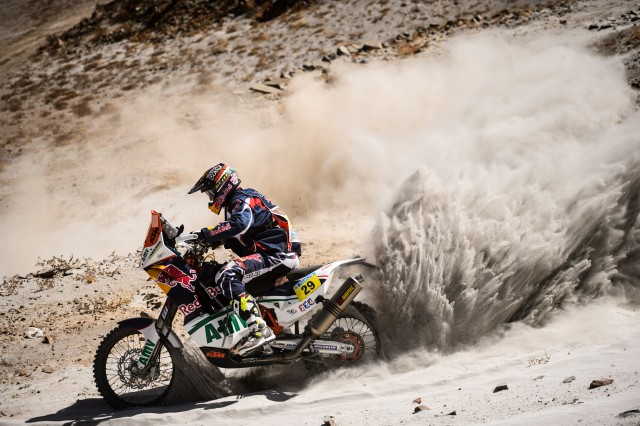 The race for motorcycle honors has also been a battle of attrition. However, the team that seems to have encountered the least difficulty thus far is the Red Bull-backed factory KTM team. And the rider on that team that has run into the least trouble and, not coincidentally, is leading the class by 8 minutes and 15seconds after Stage 13 is 38-year-old Cyril Despres of France. Despres has won the Dakar three times so far, but he’s not ready to say he has number four in the bag. “The Dakar is a race that you must respect until the very finish,” he wrote in his blog entry following Stage 12. During the stage he also provided assistance to one of his teammates, Ruben Faria, by lending him a wheel spoke key. As a result, the Portuguese was able to win the stage and consolidate his place in the top three. As for the other Red Bull KTM riders, Chile’s Francisco “Chaleco” Lopez runs second, and American Dakar rookie Kurt Caselli (above, substituting for Spaniard Marc Coma, who’s nursing a back injury) has also turned in strong performances. 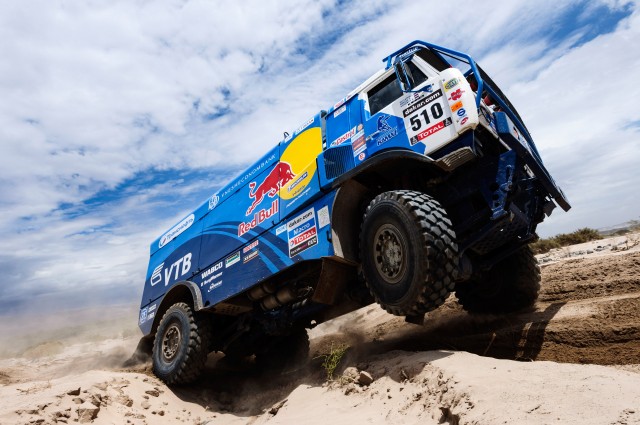 But to be perfectly honest, our favorite category is the trucks. The sight of these diesel-burning leviathans bounding over the desert landscape is simultaneously hilarious and awe-inspiring. The Petronas-backed Iveco squad led by Dutchman Gerard De Rooy dominated the category in the first half of the rally, but flat tires and mechanical trouble opened the door for the Red Bull sponsored Russian Kamaz squad. But as team leader Eduard Nikolaev knows, the same bad luck that can befall your rivals can befall you at any time. The key is never losing sight of the task at hand. “A driver must be able to focus completely on the job of driving and not be distracted by other problems,” he explained in a blog entry following Stage 12. Nikolaev leads the class over teammates and countrymen Andrey Karginov (above) and Ayrat Mardeev going into Stage 14. De Rooy still has a chance to crash the Kamaz cavalry’s (kavalry’s?) podium party, da, but don’t look for Karginov and friends to surrender without a fight, if they even surrender at all.

Want to check out the closing stages of this harrowing saga masquerading as a motor race? Check out the race’s official site, its official YouTube channel (with programming in English, French and Spanish), or daily highlight shows on the NBC Sports Network. And if you want to learn more about the Red Bull rally raid teams and get updates on their progress, visit Red Bull’s Dakar 2013 site.