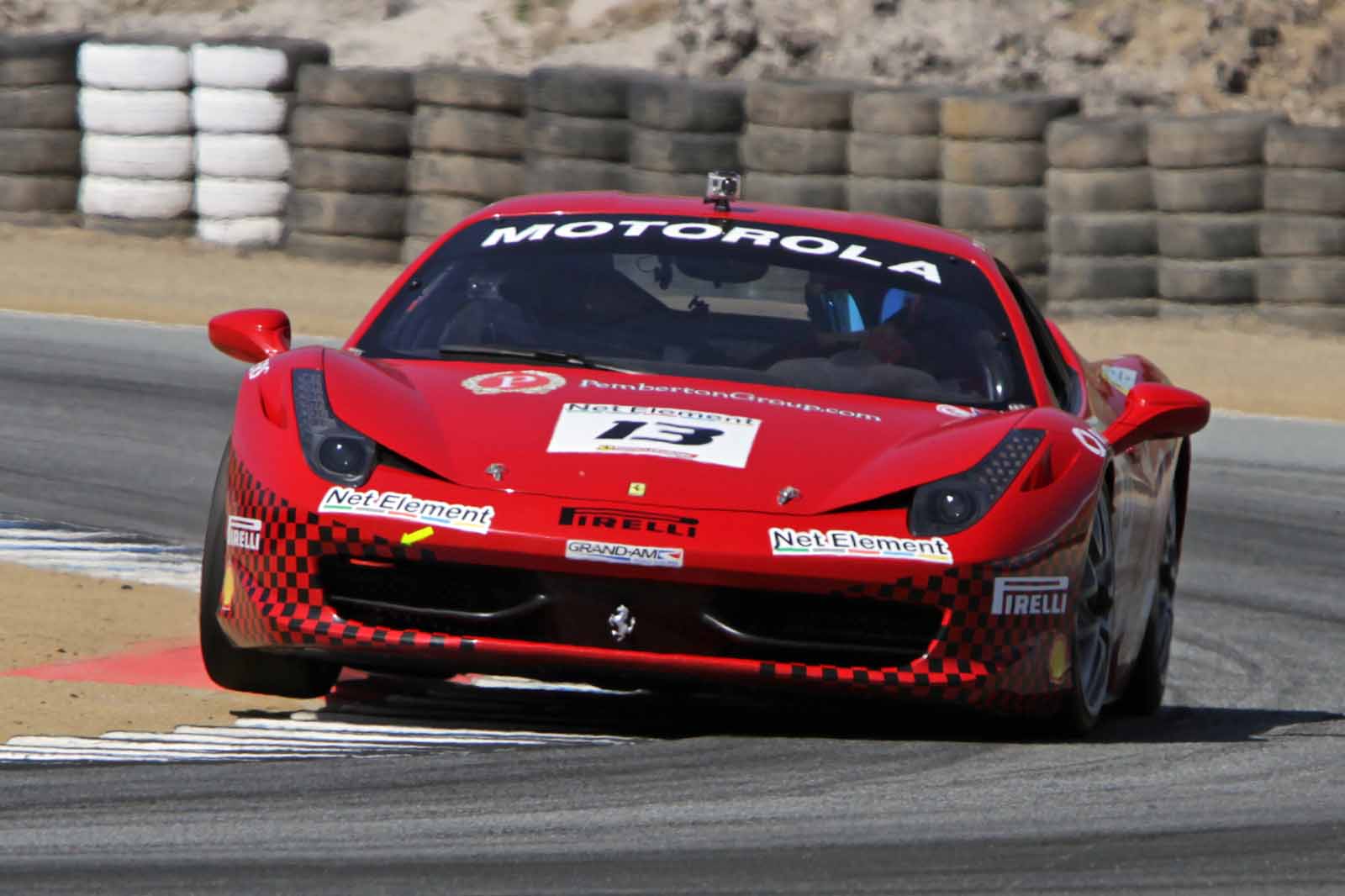 For the second weekend in a row, we packed our bags and headed up to the beautiful Monterey Peninsula, home of the world famous Mazda Raceway Laguna Seca. This weekend, the track hosted a much different event than last. One focused solely on a very special marque – Ferrari. The event, known as Ferrari Racing Days, featured two 458 Challenge races, as well as the 599XX / FXX and F1 Clienti programs running demonstration laps. Although there weren't as many F1 or XX cars as in 2011's event, there was definitely no shortage of on-track excitement. 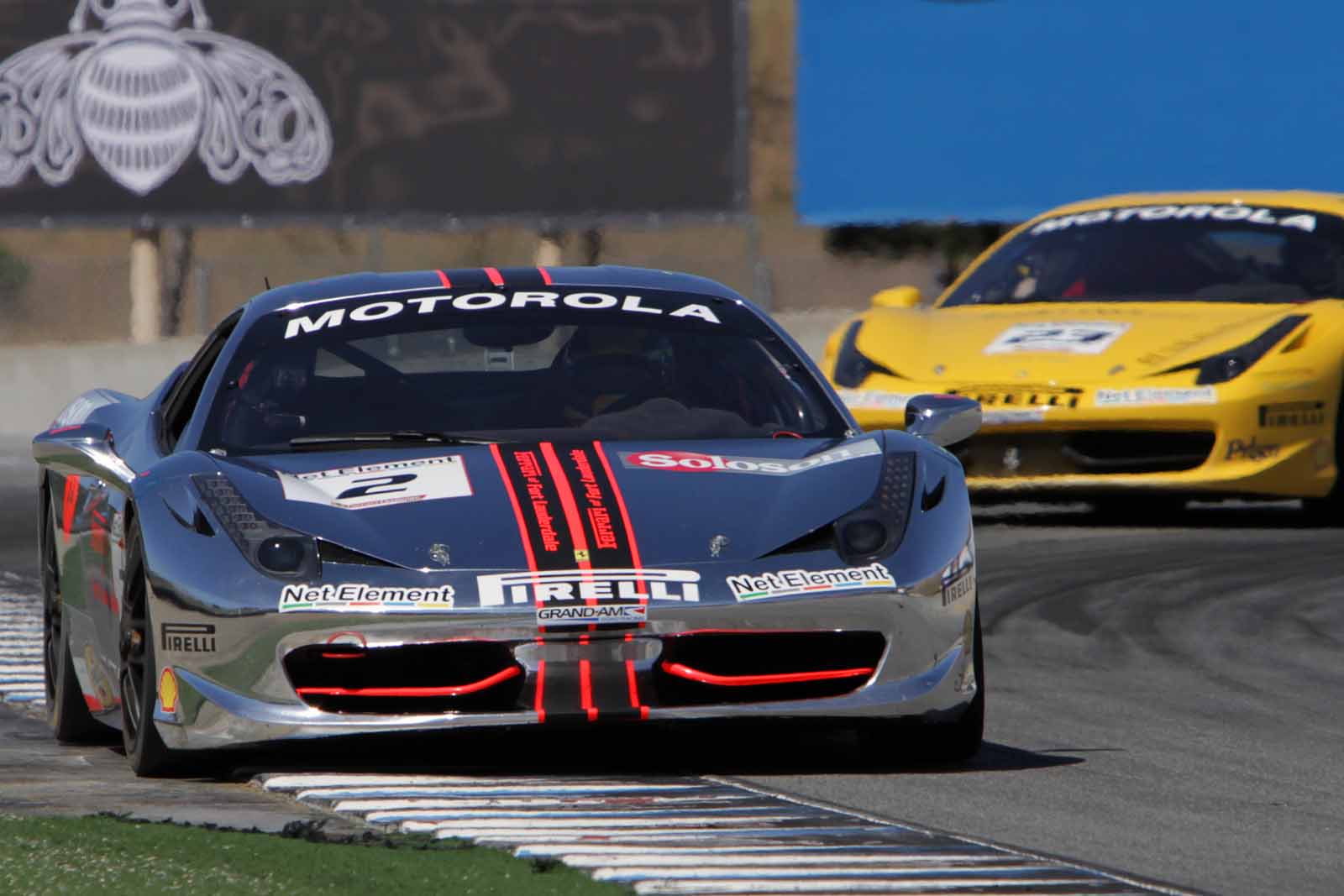 The 458 Challenge Series featured two 35-minute races this weekend. Alex Popow, driving the chrome #2 from Ferrari of Fort Lauderdale walked away with back-to-back wins this weekend. Alex not only qualified on pole for both races, he also led every lap of both races, and set each race's fastest lap times. Onofrio Triarsi, from Ferrari of Central Florida, took second place in both races as well. Unlike last year, where 458 Challenge cars competed alongside their older 430 Challenge sisters, this year's field was comprised solely of 458s. 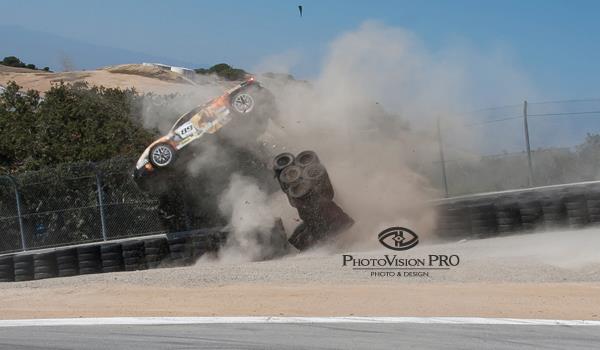 Sub5Zero spent the majority of Saturday's Challenge race shooting at Laguna Seca's famous Corkscrew. On Sunday, we chose instead to setup camp at Turn 11. This turned out to be a mistake, as we missed Ryan Ockey's massive crash on Lap 11. Luckily for us, our friend Hana was on hand to capture the incredible image above. From our understanding, Ryan's 458 suffered some brake issues, and shot straight past Turn 8A's dive into the Corkscrew. Ryan did an incredible job of avoiding a head-on collision with the tire wall, hitting the protective barrier sideways instead, sending the car up in the air, then onto its roof. Note to self – always watch Challenge races from the Corkscrew! 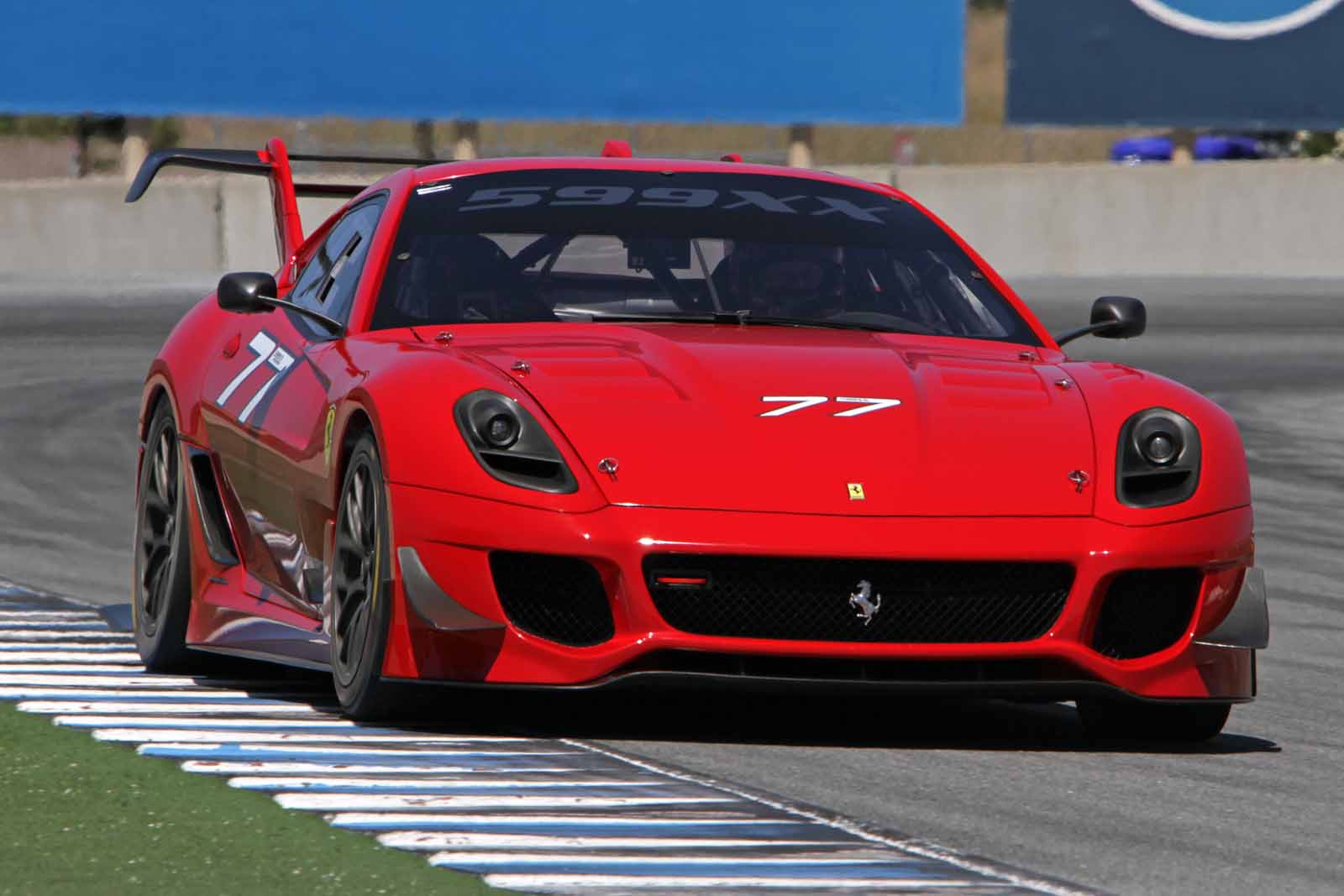 Another highlight of this weekend's event was the 599XX Evoluzione's first outing at Laguna Seca. The 599XX was first introduced in 2009 – its more fierce derivation, the Evoluzione debuted at last year's Bologna Motor Show. The 599XX Evo features a slightly re-tuned version of the 6.0 Liter V-12, resulting in an extra 20 HP (740 HP total). A significant amount of work was done to the car's aerodynamics package, which is actually linked up to the car's electronics control systems. The enormous rear wing has two flaps that change position automatically based on the 599XX Evo's steering wheel angle, longitudinal acceleration, lateral acceleration, and vehicle speed. Downforce increases from 330kg with the flaps open, to over 400kg when the flaps are closed. The Evoluzione upgrades also include a redesigned front splitter and rear diffuser. Although a bit slower than its sister, the FXX Evoluzione, the 599XX Evo is by far one of the most incredible machines we've ever seen at a racetrack. 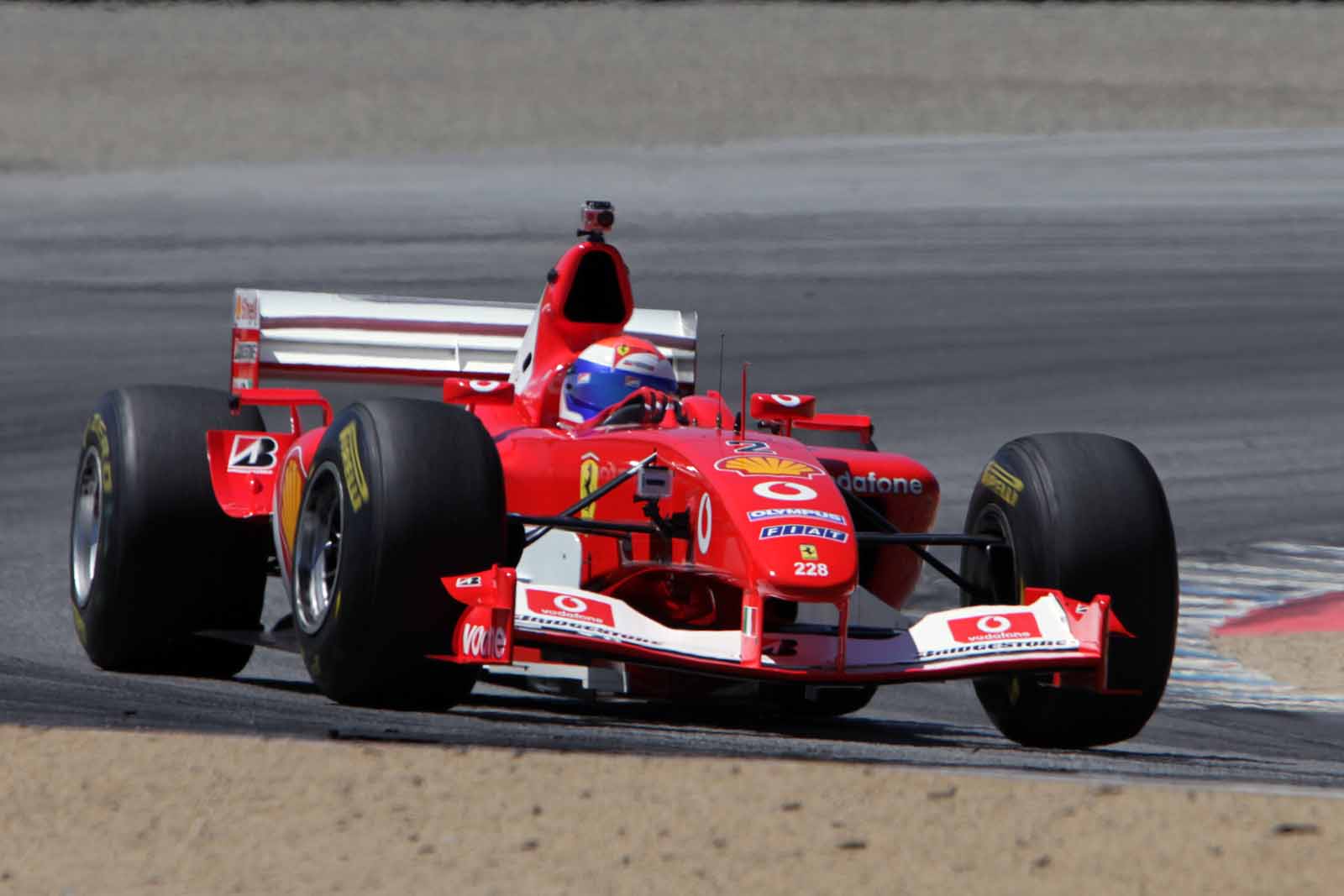 As many racing fans will tell you, there is no better sound than that of a Ferrari F1 car at speed. One of the true highlights of this weekend's event was the Ferrari F1 Clienti program demonstration laps. Although only one owner brought his Clienti car to this year's event, something incredibly special happened during those few short laps. The car shown in the photo above is an F2003-GA, the same machine with which Michael Schumacher won Formula One Driver's Championship with in 2003.

This actual car was Schumacher's teammate Ruben Barrichello's backup car for that season. It is currently owned by Bud Moeller, who for the past 20 years has owned and driven dozens for Formula One cars. But for a few short laps, he let someone else take control of his multi-million dollar machine – Ferrari's ex-test driver Marc Gene. And on Sunday morning's session – Marc not only drove the F2003-GA past the 170 mph mark on the front straight, he also broke the unofficial track record with a time of 1'05.786! The record is considered unofficial because it was set during an unsanctioned event at the track. But it is still the fastest time recorded around Laguna Seca's 2.238 miles! 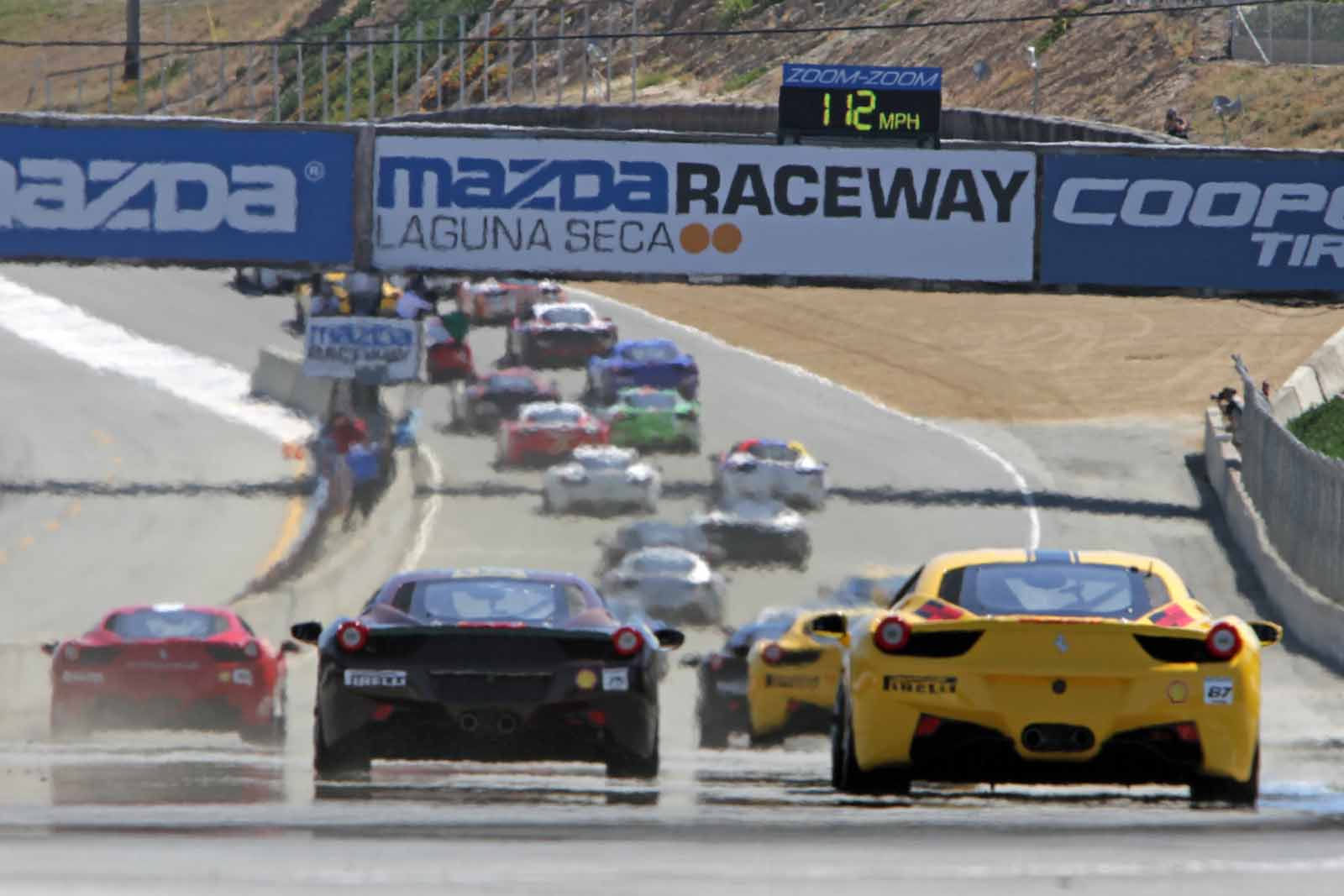 Once again, 2012 Ferrari Racing Days did not disappoint. If you're a fan of the Prancing Horse, it doesn't get much better than this – incredible cars, amazing track, broken records… As the F2003-GA finished it's last few laps, and Laguna Seca was once again quiet, there was a feeling of sadness. But as we walked up the hill towards the helopad near the parking lot, and turned around for one last look at the track, we couldn't help but smile… what an incredible weekend this was! Stay tuned for future coverage of other events at Laguna Seca, including the Rolex MotorSports Reunion coming up in August.