The German auto industry has long been one of the most (if not the most) respected on the planet. Much of that has to do with its reputation for precision engineering and attention to detail. Still more has to do with knowing that most new models get tested to their limits on the Autobahn and/or the Nürburgring. Bottom line: Deutschland takes this car building stuff seriously.

However, when it comes to showing off those new cars, the city of Frankfurt likes to throw a party every other September, and it also invites manufacturers from other nations to join in the four-wheeled revelry. (Naturally, things never get too crazy, what with Oktoberfest being mere weeks away.) This year’s guest list is one for the ages, but we were still able to pick out the 20 automotive attendees (10 concept models and 10 production models) we’d most like to chat up by the punchbowl. 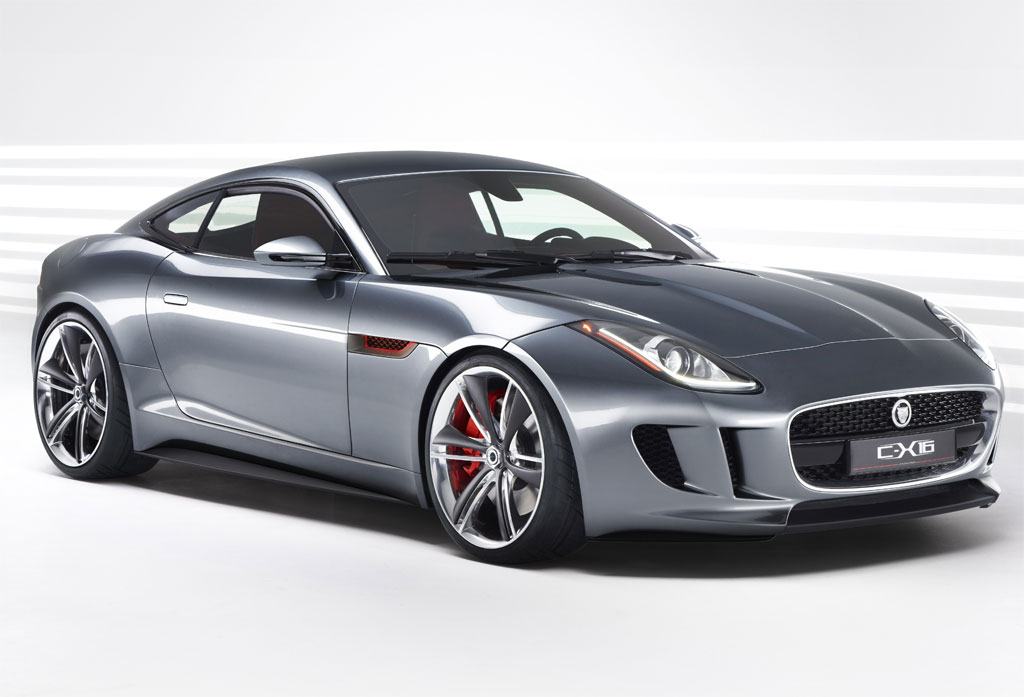 Jaguar’s on-again, off-again baby sports coupe appears to be on again, if the C-X16 concept is any indication. And while the styling might not break much new ground for the brand, the powertrain certainly does, with an experimental supercharged V6 mated to an 8-speed automatic transmission with an integral electric motor/generator that’s activated by a “Push to Pass” button on the steering wheel. So you could say this car is KERS’d. (Thank you, thank you, be sure to tip your waitress…) 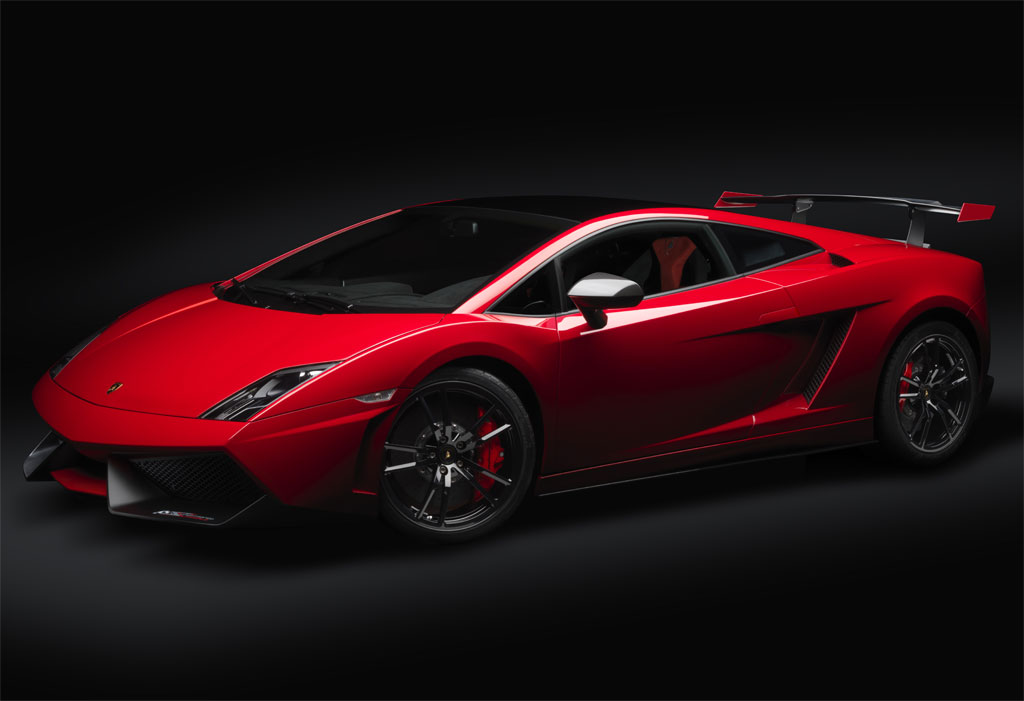 Like it or not, the Lamborghini Gallardo is nearing the end of its life. But don’t cry, little one; the folks in Sant’Agata are sending it toward the Big Sleep with the 10-pot bull’s most monstrous special edition yet, the Super Trofeo Stradale. Basically a street legal version of the Gallardo Super Trofeo one-make series racer, this beastie combines 570hp with AWD, a sub-3,000 lb. curb weight and a track-ready rear spoiler to yield face-stretching performance. Only 150 will be made, though, so get in line yesterday. 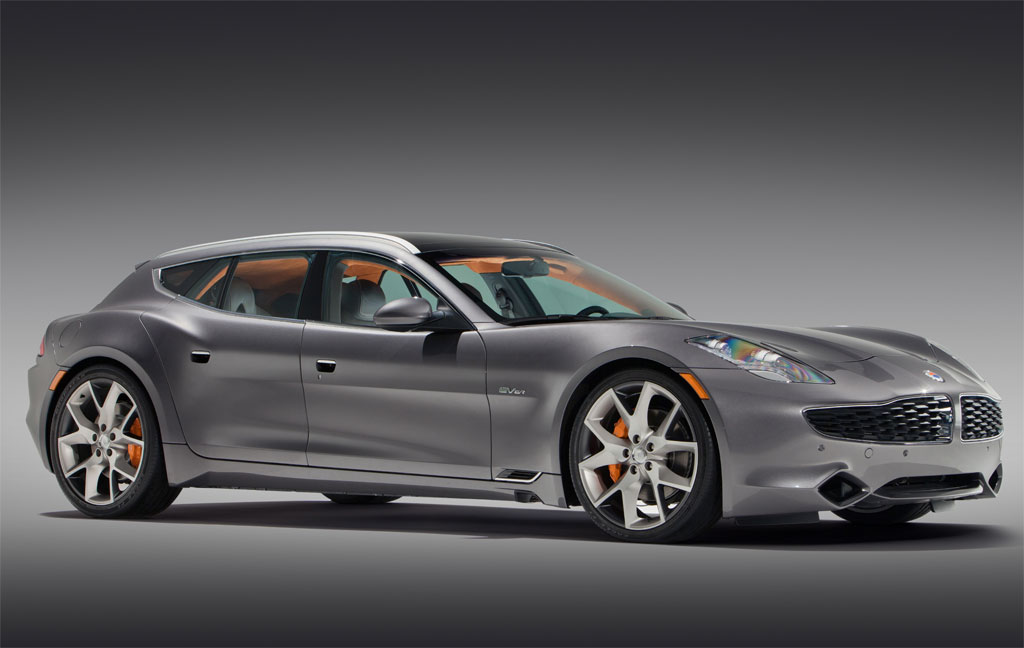 Even though production of the Fisker Karma is still yet to ramp up, the company has already shown a concept convertible version of the plug-in hybrid dubbed the Sunset. Now there’s a second Karma-based show car, the wagon-ish Surf. There’s more than a little hint of Ferrari FF in the shape, but like the Surf’s sedan sister, there are two doors on either side. We’re hoping it reaches production in 2013 like Fisker says it will, but considering all the delays the Karma has encountered, we aren’t holding our breath. 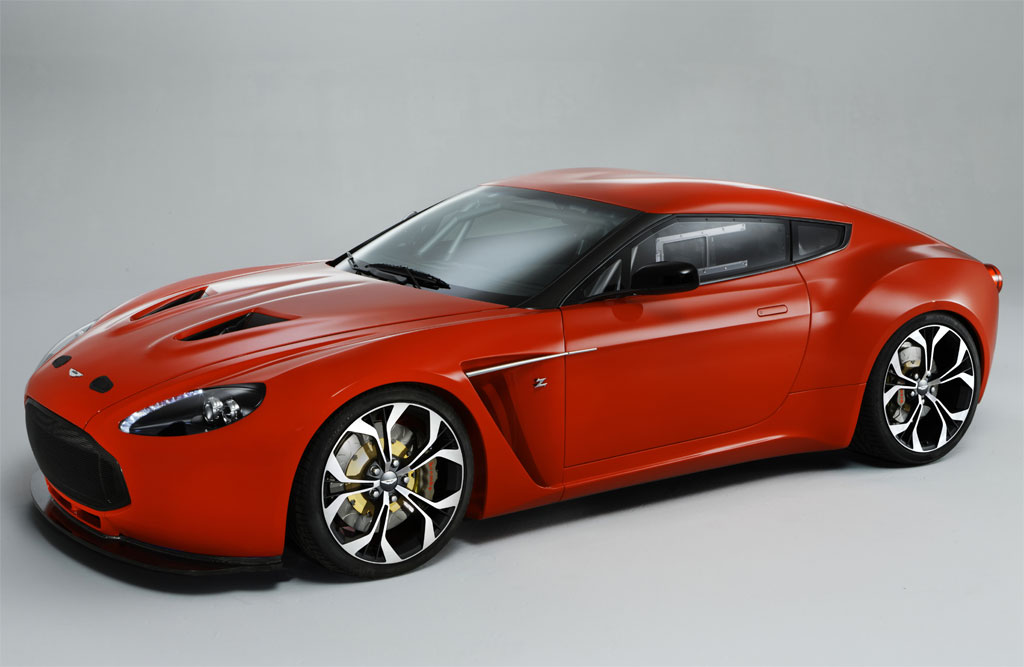 We first became acquainted with this Anglo-Italian stunner back in May, but now we know that it will in fact be built (Yay!), but only in a quantity of 150 (Boo!). Oh, and it will be priced at what currently equates to just over $550,000 (Double boo!). At least we’ll be able to admire this V12 Vantage-based beauty from afar. 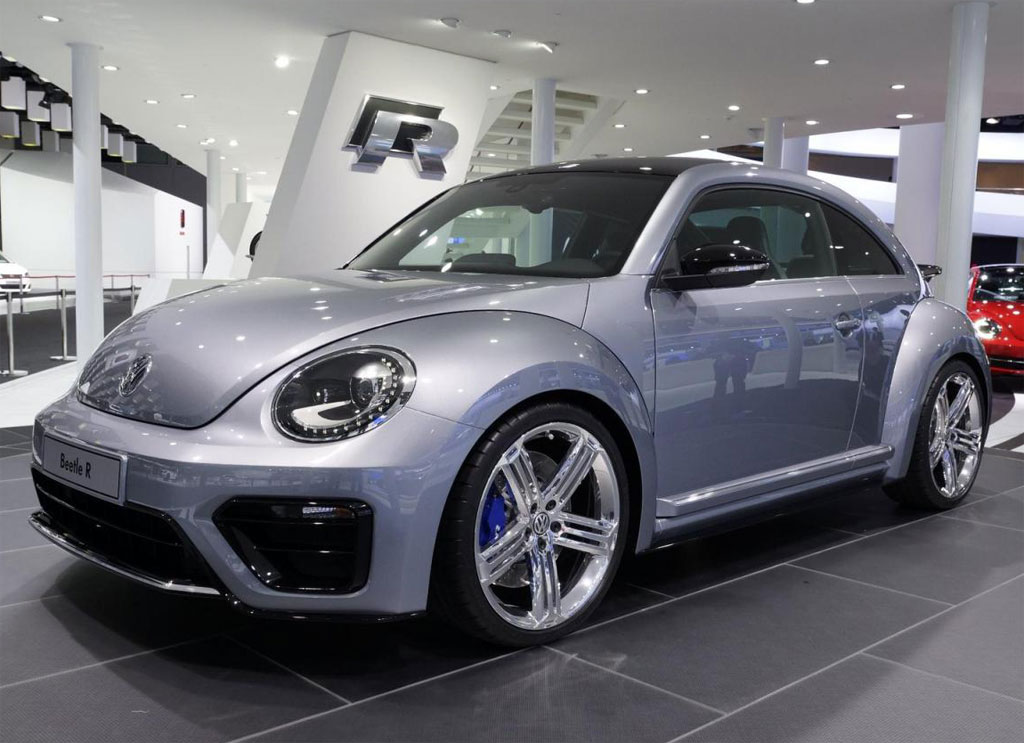 Volkswagen’s new (note the lowercase “new”) Beetle is now scurrying into showrooms, and already the company is teasing an extra spicy version by way of the Beetle R Concept. The familiar VW/Audi 2.0L turbo four-banger ruminates under the vented hood, while a 6-speed DSG twin-clutch trans sends power to the front wheels. Those wheels, incidentally, are 20-inchers. Other changes include a lowered ride height, more aggressive front and rear fascias, sport bucket seats, and auxiliary gauges. It definitely won’t be mistaken for “cute.” 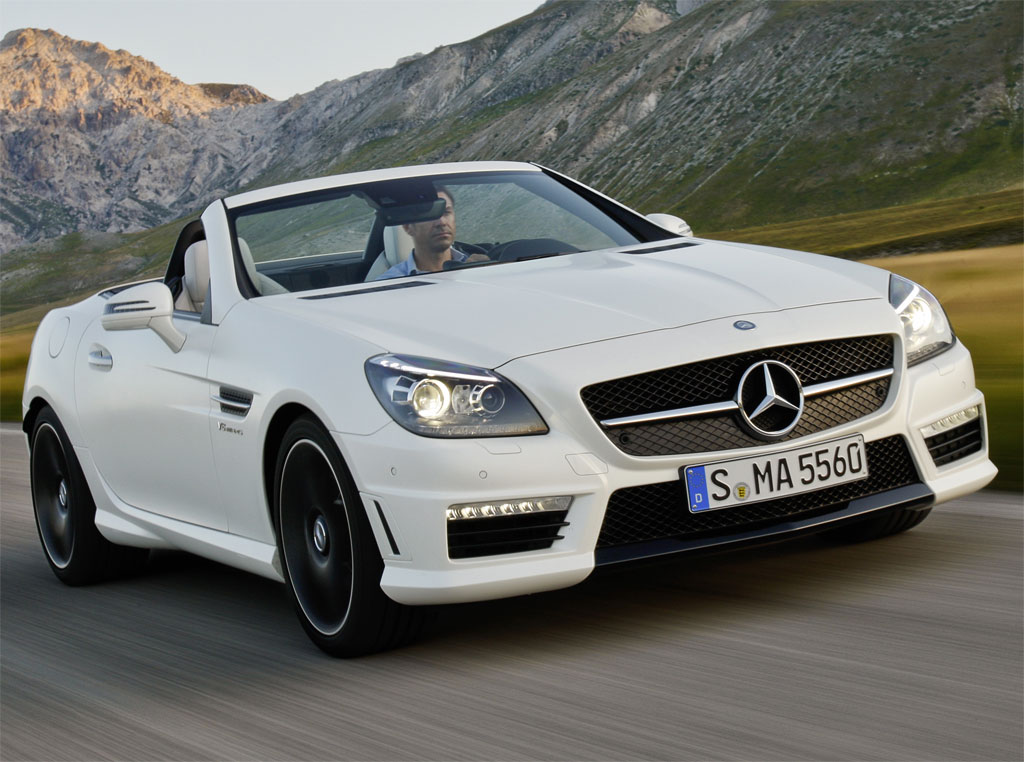 Mercedes-Benz’s in-house tuning outfit, AMG, must think there’s still at least a little life left in normally aspirated performance engines; why else would they stick a brand new atmo 5.5L V8 in the new SLK55 AMG? The freshly minted mill features direct injection and cylinder deactivation, and produces 415hp and 398 lb.-ft of twist. It’s plugged into the also new third-generation SLK body, which has been treated to more muscular, SLS-like styling inside and out, plus beefier suspension and brakes. Look for it to land on these shores early next year. 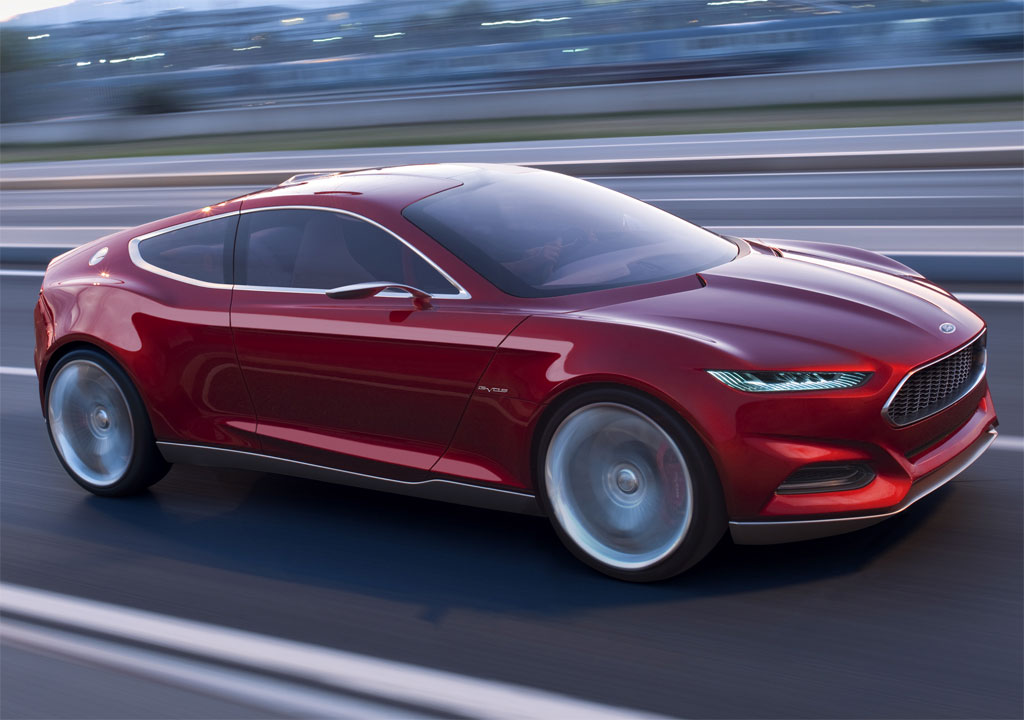 Ford has been one of the leaders in the advancement of in-car computing with systems like SYNC and MyFord Touch. Now the Dearborn firm wants to take things a couple steps further, adding things like cloud computing access and creating seat that reads your heartbeat and adjusts the amount of information that is displayed on the dashboard. Cool stuff, but even cooler that it’s being displayed in the Evos, a sensuously-styled concept car that is rumored to be a plug-in hybrid and is also rumored to be a precursor to the next generation Fusion. If that’s the case, we think the Hyundai Sonata may soon have serious competition for the title of best looking mid-size sedan sold in America. 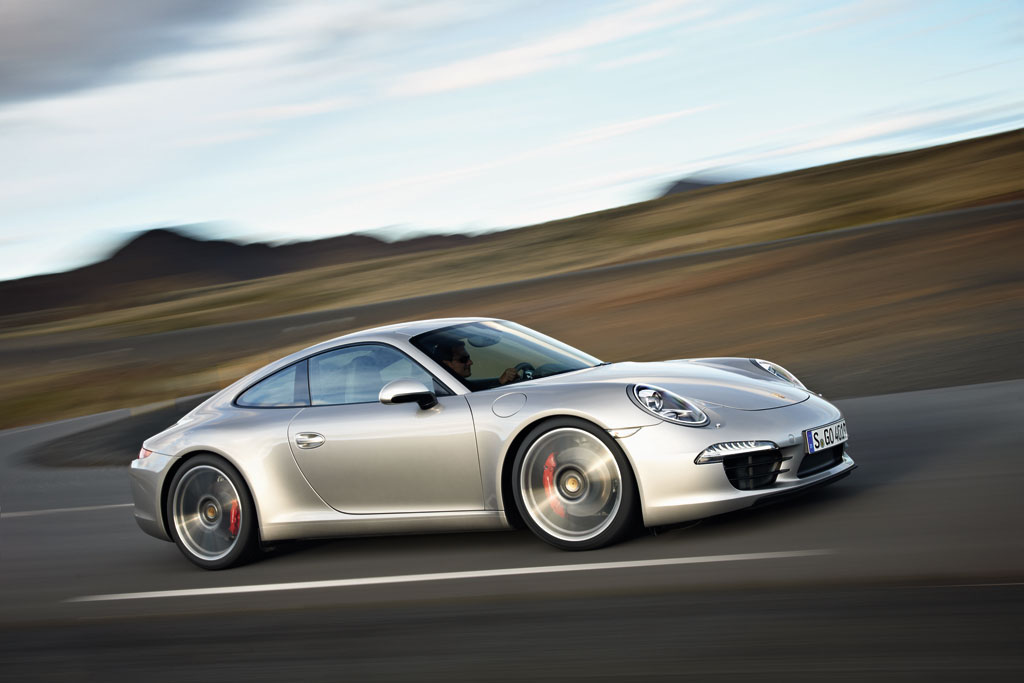 Few automotive nameplates have as much staying power as the Porsche 911. This is due in no small part to the 911’s ability to evolve while still staying true (in large part) to its roots, and the newest evolution – codenamed 991 – is no exception. Both the Carrera and Carrera S have more powerful but less thirsty flat sixes mounted aft of the rear wheels, as well as a choice of 7-speed PDK or 7-speed manual(!) transmissions. Süß! 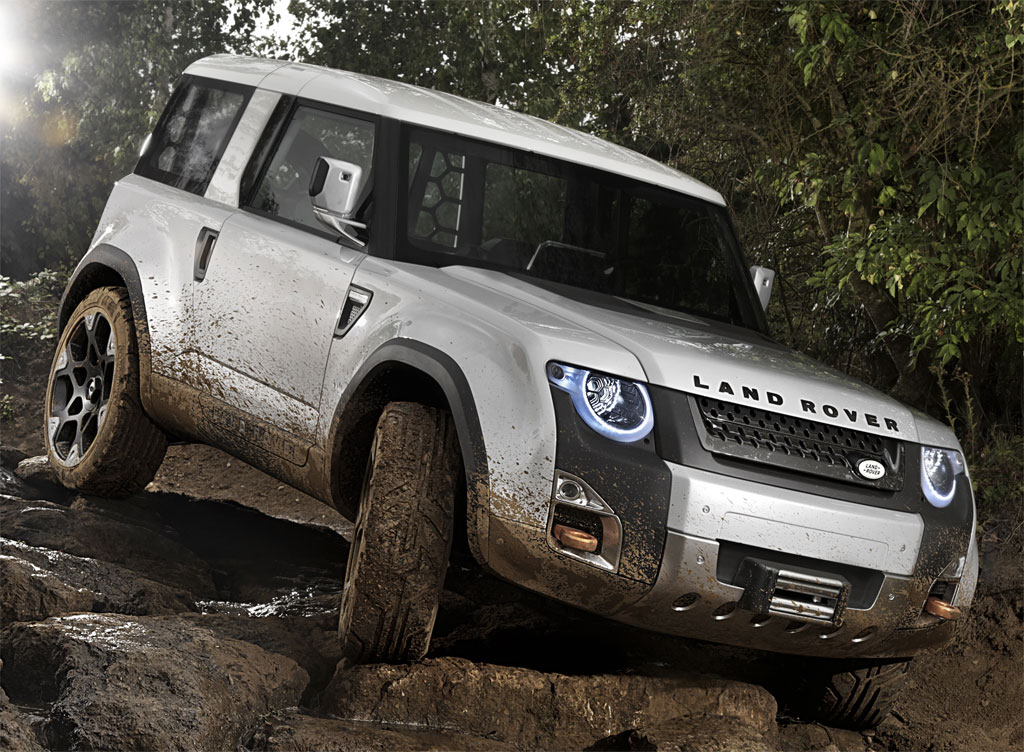 Rumors abound that Land Rover will soon be hitting the reset button on the venerable Defender series, which hasn’t been offered in the U.S. since 1997. Whether or not a new Defender would come here is unknown, but if it winds up looking anything like the DC100 Concept, we’re going to start thumping the tub for American availability right here and now. Exhibited in Frankfurt in both closed- and open-top forms, the DC100 retains the Defender’s blocky silhouette while neatly integrating modern Land Rover/Range Rover styling cues. It also has a sonar system that determines the depths of rivers, so you’ll know which ones are shallow enough to ford. How cool is that? 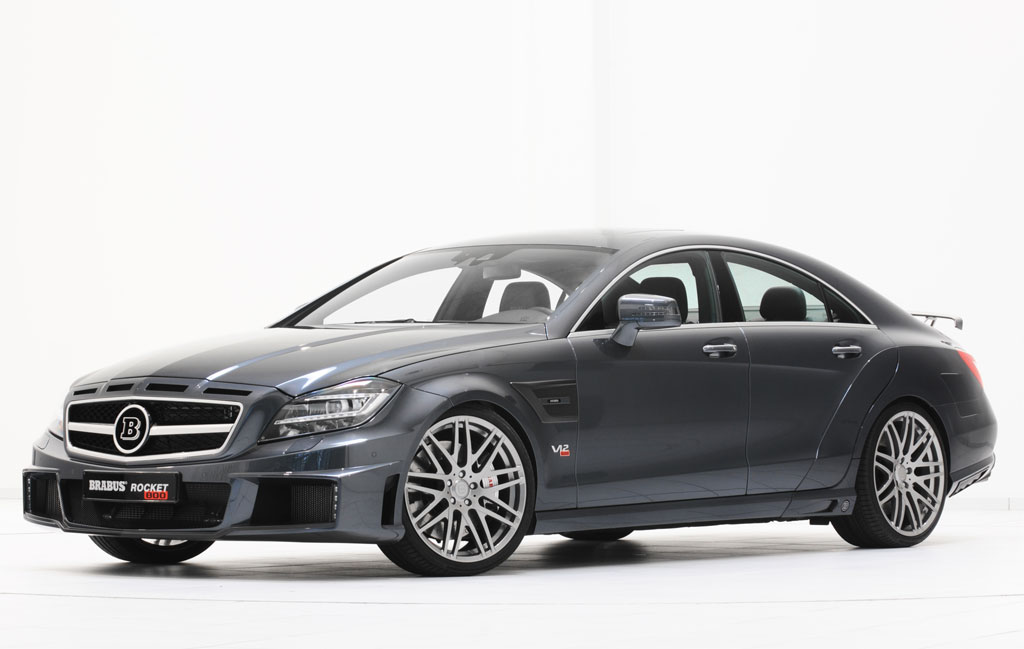 Veteran Mercedes-Benz tuner Brabus has been stuffing twin-turbo V12s into mid-size E-Class and CLS-Class models for a few years now. The addition to this family of German muscle cars is the Rocket 800, a dozen-cylinder dynamo based on the new CLS. The bored and stroked 6.3L powerplant makes a claimed 800hp, while torque is actually limited to 811 lb.-ft. Oh, and Brabus says the top track speed is 230 mph. Yeah, that was our reaction, too. 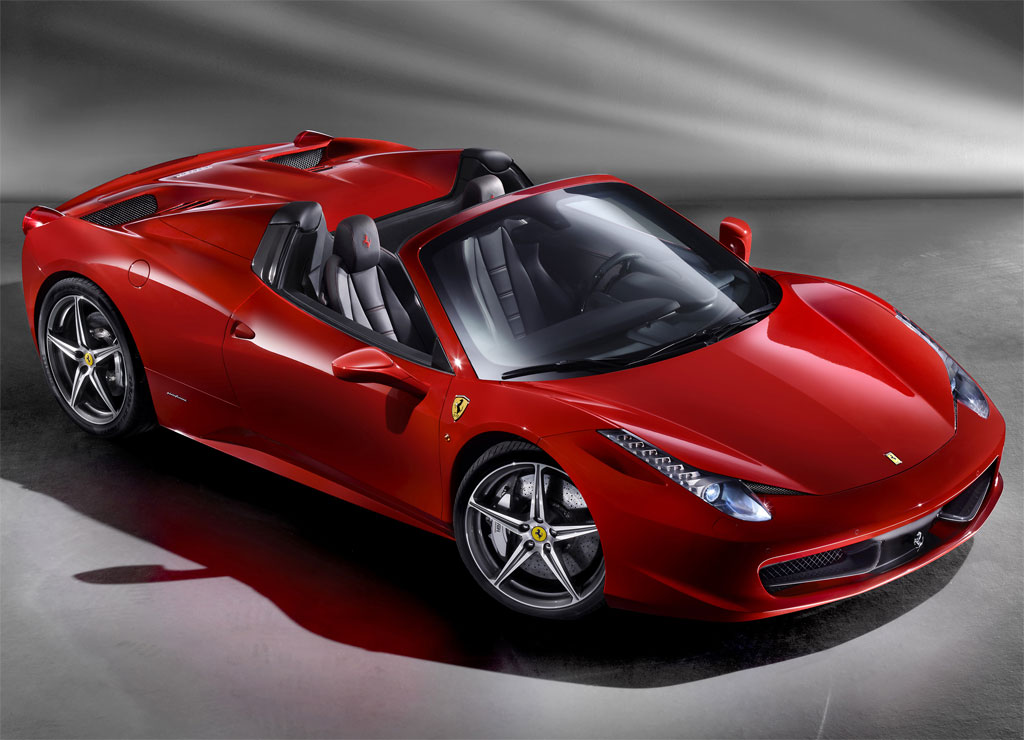 The Ferrari 458 Italia is arguably one of hottest exotic cars ever made, despite only having a naturally-aspirated V8 with “only” 562hp. So what does that make the 458 Spider? Plasma? Thermonuclear? Whatever adjective you attach to it, the fact remains that this al fresco Fezza is sure to draw a crowd. This is especially true when you raise or lower the stylish, smoothly integrated folding hardtop, a production mid-engine Ferrari first. 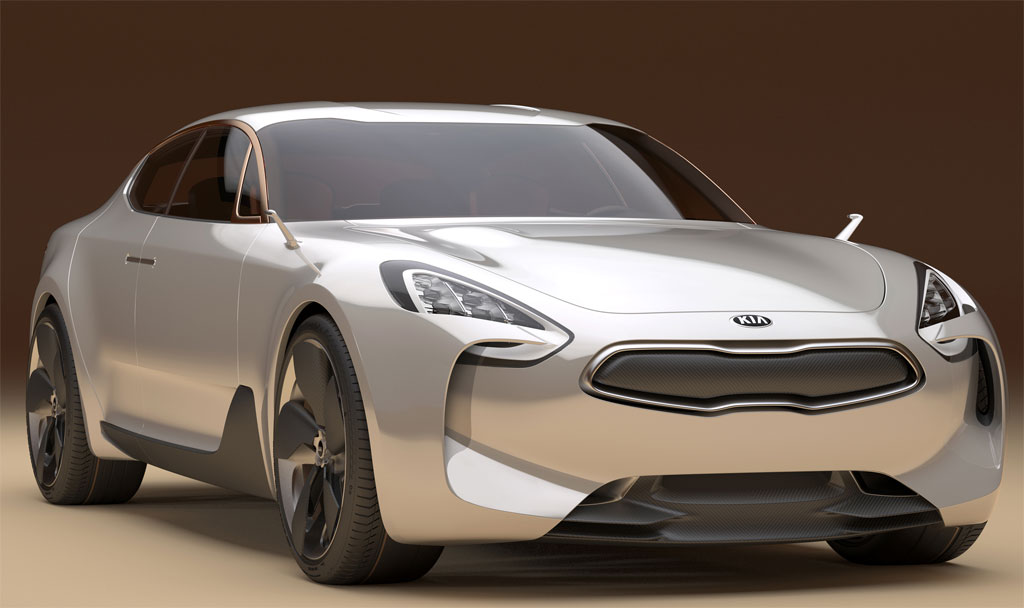 As if further proof was needed that Kia is for real, the Korean firm has crafted the handsomely-proportioned (but generically-named) GT. The low-slung, rear-drive fastback sedan is powered by a turbocharged 3.3L V6 producing 389hp backed by an 8-speed automatic tranny. Kia is expected to introduce a production RWD premium car soon, but word on the street is it won’t look like the GT, which is a shame, because who wouldn’t want a cheaper, less bulbous alternative to the Panamera? 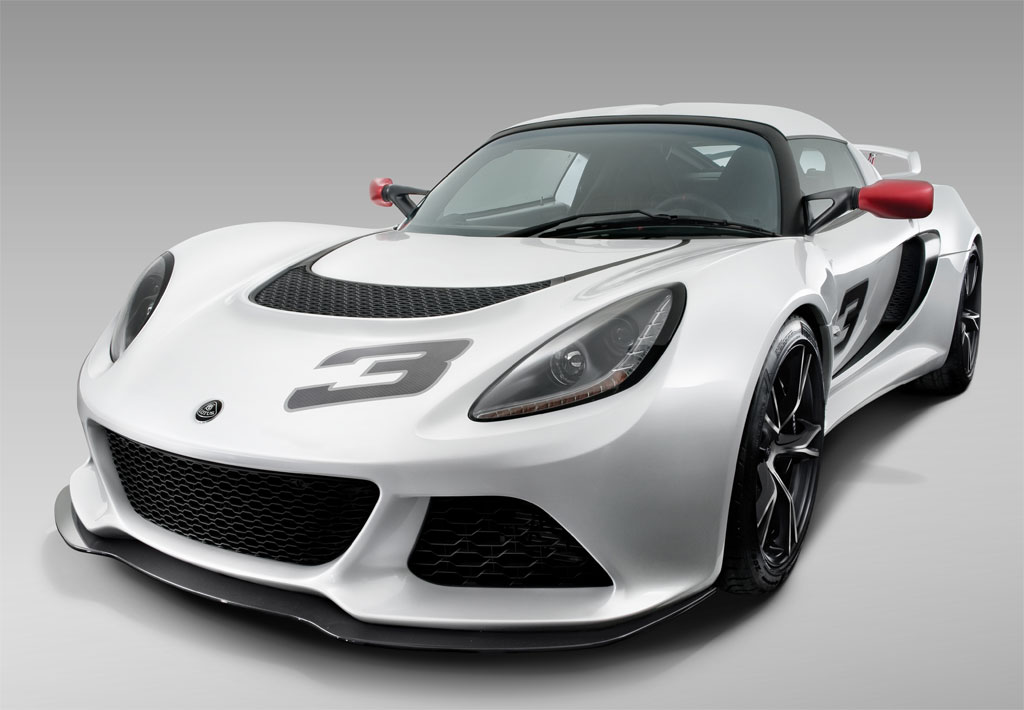 The corpse of the previous generation Lotus Exige isn’t even cold yet, but fabled British marque is already touting the next iteration of the Elise’s fixed-roof sibling. The pumped up bodywork is certainly newsworthy, but it pales in comparison to the news under the hood. There you’ll find the same supercharged 3.5L Toyota V6 that you will in the Evora S, producing 346hp. Keep in mind, though, that the Exige S only weighs 2,380 lb. That’s adding lightness, baby! 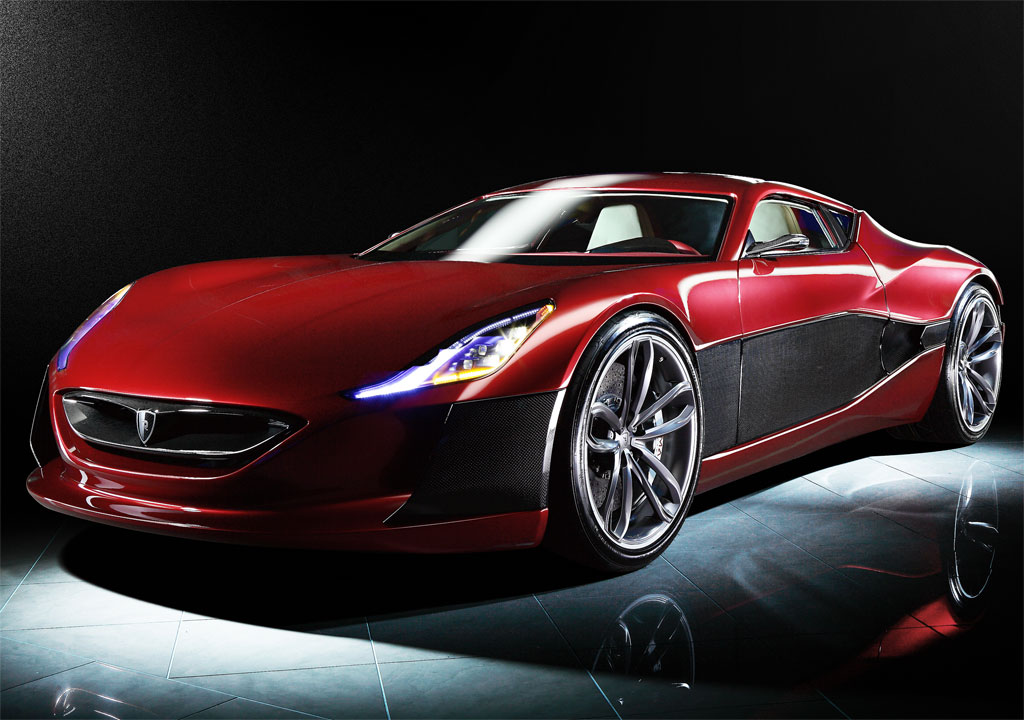 Few people consider Croatia to be a hotbed of carbuilding activity, yet that’s the nation the Rimac Concept One calls home. A quartet of wheel-mounted electric motors producing a bat-Scheiße 1,088hp propel this sexy beast up to a claimed 190 mph. Hopefully this baby doesn’t stay a concept very long. 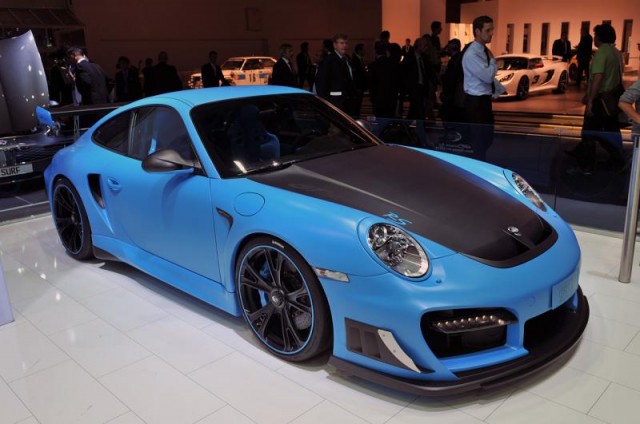 The Porsche 911 GT2 RS is already a kooky bit of kit, what with 620hp and manual damn-near-everything, but the serial Porsche tweakers at TechArt felt there was room for even more madness. And the GTStreet RS is proof their assumption was correct. The aggressive body kit, stylish wheels and matte blue and black paint are dramatic departures from the stock GT2 RS, but the extra 90 horsepower (for a total of 710hp). That helps it hit 62 mph from a dead stop in 3.3 seconds and max out at 218 mph. Lordy, Gordy… 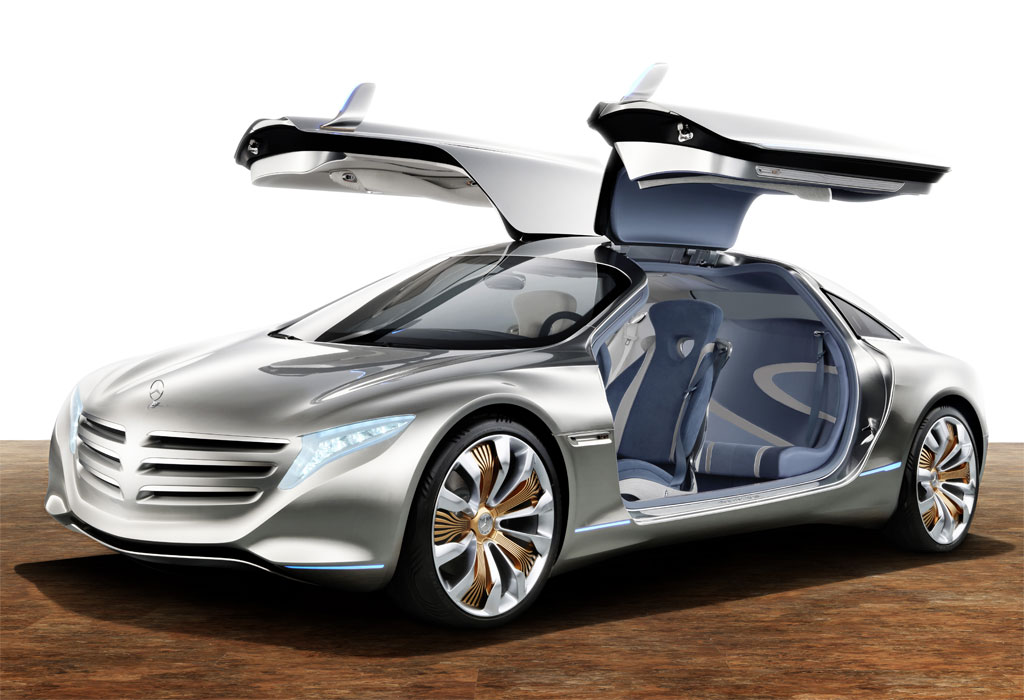 Many automakers are already selling or soon will be selling at least one alternative fuel vehicle. Almost none of them, however, combine two alt fuel technologies in one vehicle. However, Mercedes-Benz has packaged both a fuel cell and a plug-in hybrid system into the F-125! (Can’t forget the exclamation point!) Concept. As the name implies, it is a celebration of the company’s 125th anniversary, as well as a hint at what the lab rats in Stuttgart are working on for the years to come, such as stereoscopic 3D instrument readouts and lithium-sulphur batteries. 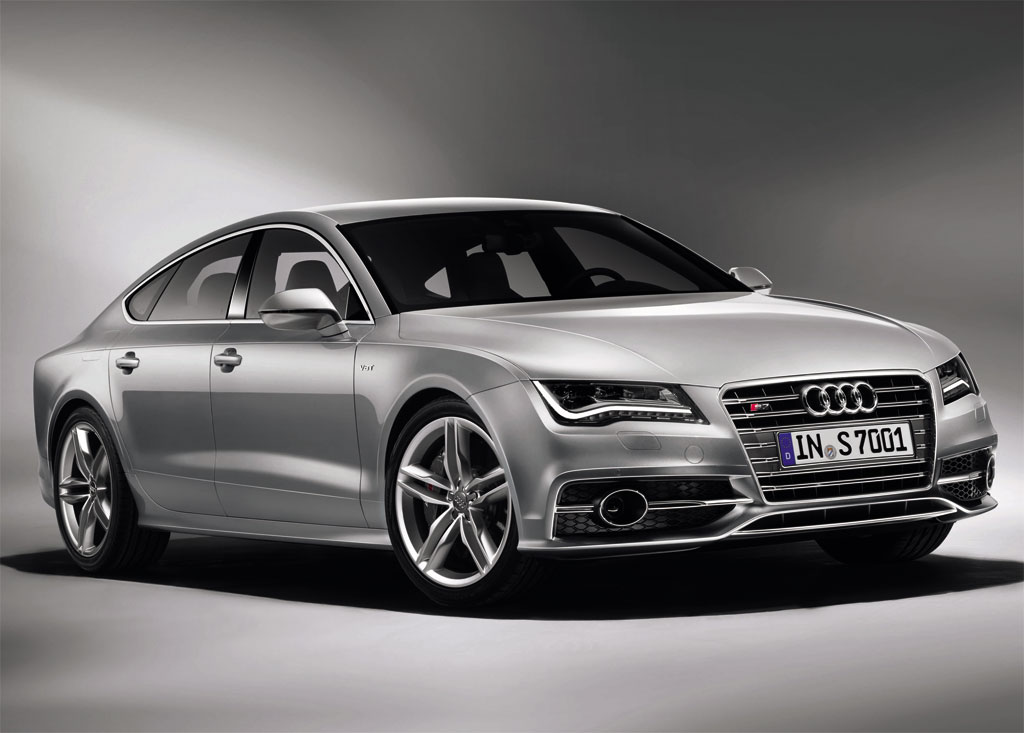 We’re definitely fans of Audi’s A7; it neatly mixes hatchback utility with sharp, “four-door coupe” lines. But if the only reason you don’t like the A7 is because you think it’s too slow, the S7 is here to let you know that you’re out of excuses. It packs a twin-turbo 4.0L V8 putting down 420hp and 406 lb.-ft of twist, which turns all four wheels through a 7-speed dual-clutch transmission. Hawt. 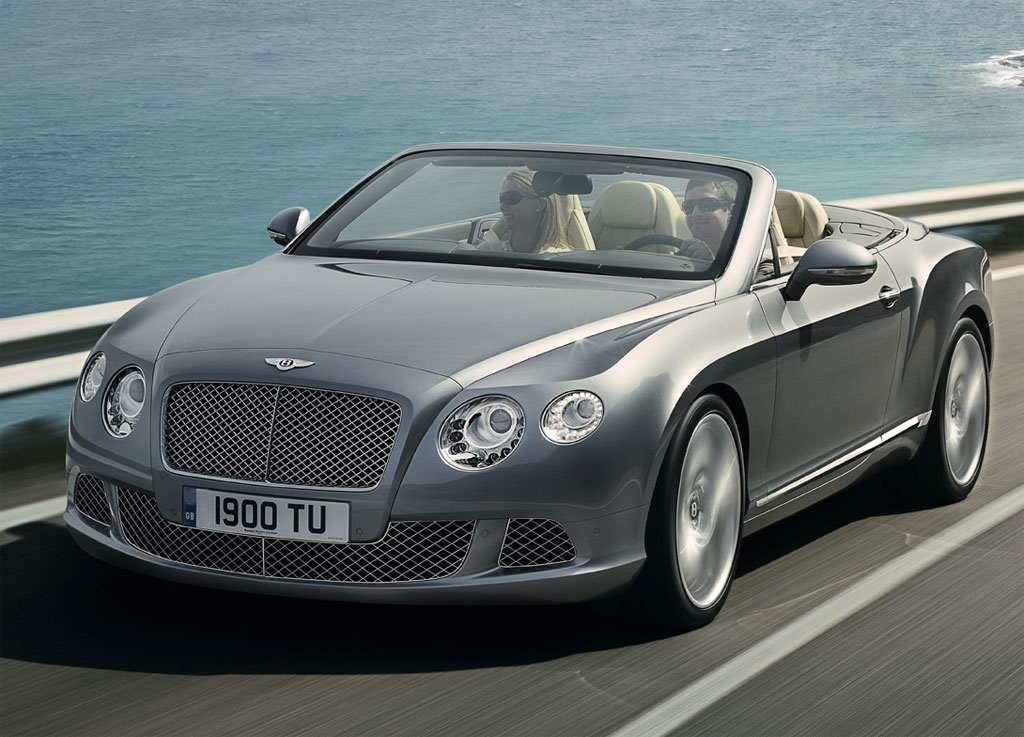 With the new Bentley Continental GT on its way to production soon, it should surprise exactly no one that a new Continental GTC is hot on its heels, er, tailpipes. It features the same evolutionary styling and more powerful flex-fuel twin-turbo W12 as the hardtop, but with the added bonus of a folding fabric roof. Even though this model will inevitably be co-opted by the famous-for-being-famous crowd, we’ll still be proud to pine for it. 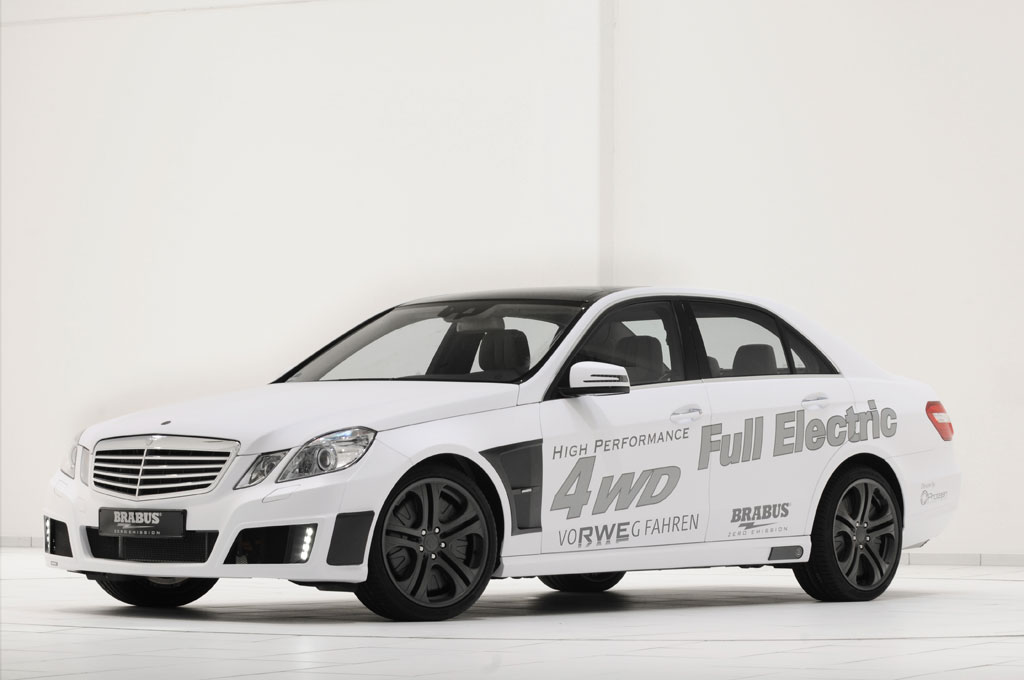 Yeah, we know: The name of this car is an unoriginal mouthful. But if you look beyond that, you’ll find an E-Class sedan stuffed with four hub-mounted electric motors and a bevy of lithium-ion battery cells. The ensemble is good for a claimed 429hp and a Kenworth-worthy 2,360 lb.-ft (No, that’s not a typo.) of torque. Gad. Bleeping. Zooks. But even with all that twist, Brabus says this electron-fueled concept can only manage the 0-62 mph dash in 6.9 seconds, while top speed maxes out at 137 mph in sport mode. Hardly spectacular, but on the bright side, you’d never have to set foot in a gas station bathroom. 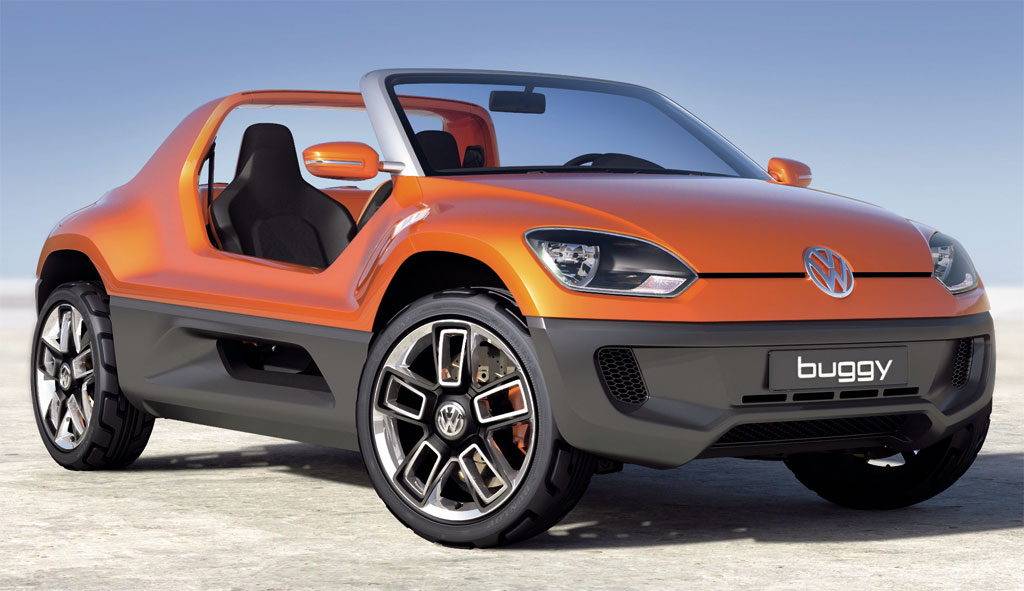 Volkswagen used Frankfurt to introduce the hotly-anticipated production version of the diminutive Up! city car which, sadly, won’t be coming to the U.S. anytime soon. On a happier note, though, VW did break out a small army of concept cars based on the Up!, including this playful Myers Manx (and its zillion imitators) homage dubbed the Buggy Up! We can picture a production version being a hit beach bums, a stylish conveyance for lifeguards, and the four-wheeled star of the inevitable remake of your favorite 1960s beach movie (since, you know, Hollywood has thrown in the towel on original ideas).