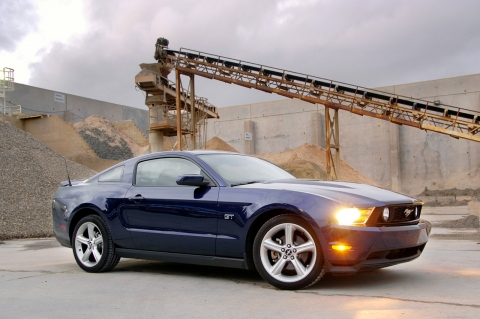 That’s right folks, it looks like the 5.0 is back! One of the most iconic and famous numerical designations of automotive lore is making a return. It’s hard to keep a secret secret for too long and news of the return of the 5.0 Mustang GT for the 2011 model year has officially leaked. Someone on Facebook and Twitter has blabbered the initial specs (much to the chagrin of Ford) and they are impressive. This information is not unexpected, but the confirmation makes us giddy nevertheless.

The new V8 engine will produce 412 horsepower, which means that it should finally be on par with the other cars in its class. Until now, the Ford Mustang GT has had to pit its puny 4.6-liter, 315-hp powerplant against the likes of the 2010 Chevy Camaro SS with its 6.2-liter V8 good for 422 horses (with the 6-speed manual) and the 2010 Dodge Challenger SRT8 and its nasty 6.1-liter HEMI pumping out 425-hp. Both of those models carry much more weight, meaning Ford’s upcoming pony car should be a lively competitor.