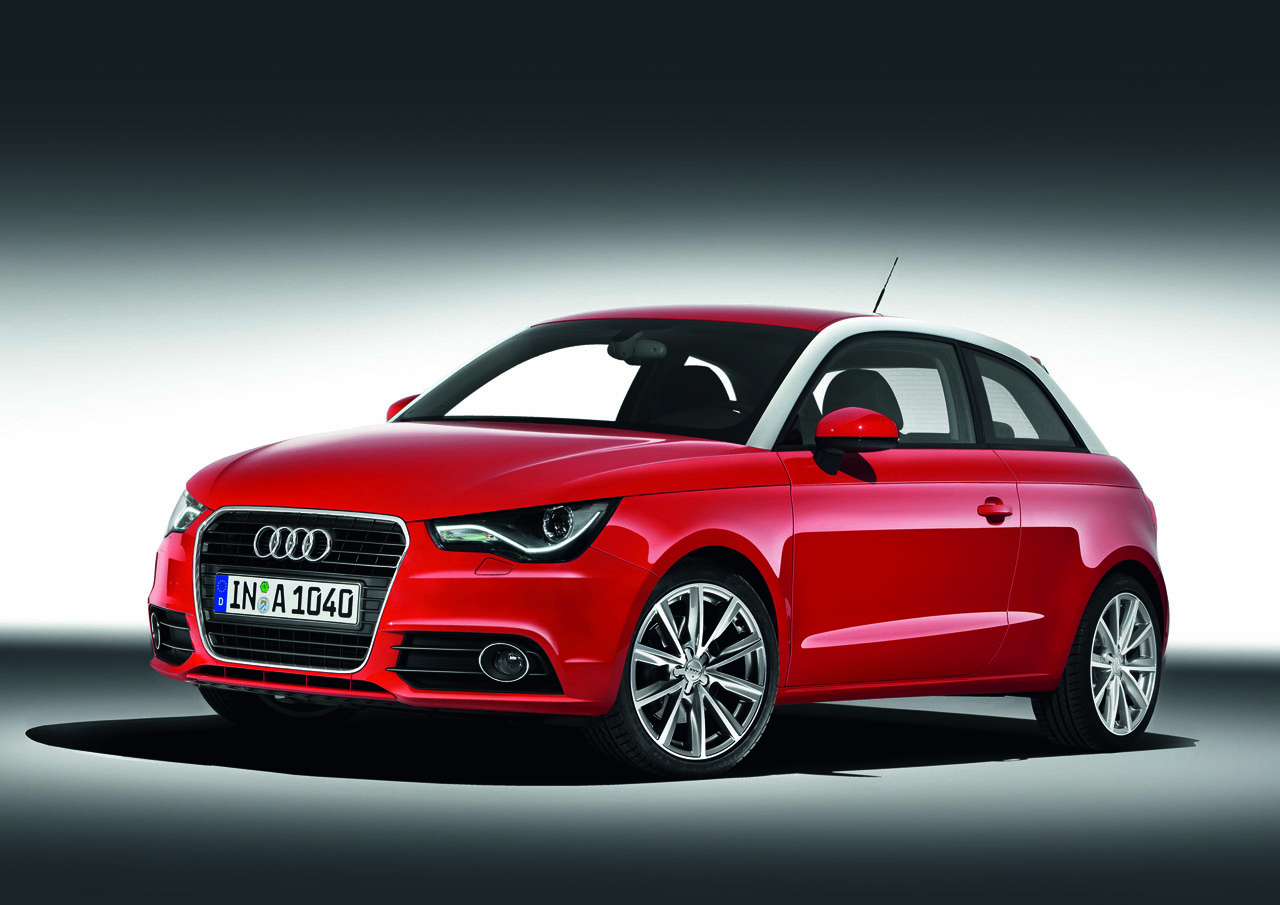 It was only a matter of time before Audi got into the compact hatchback market, a segment that they have been trying to aggressively go after by downsizing their sheet-metal and powerplants. The A3 has been a big success but after watching MINI Cooper sales take off, they knew they had to go even smaller, much smaller. Back in 2007, the Metroproject Quattro concept was debuted and now we finally have the official word on the 2011 Audi A1 after months of teasers and various concept iterations.

The new Audi A1 follows fairly closely to the visual representations and design studies we’ve seen. It measures 155.5 inches long, 68.5 inches wide and 56 inches tall, making it more than a foot shorter and 10 inches narrower than the A3. This squat hatchback will be available with a choice of 10 alluring exterior colors and 4 different colors for the roof arches. Some of the options available include LED lamps front and rear as well as Xenon headlights.

Inside, Audi’s tradition of excellent fit and finish continues. Two packages, Attraction and Ambition, are available to offer a selection of seating and upholstery in either cloth or leather sporting contrasting or complementary trim. Black, titanium gray, beige or wasabi green color combos are available to adorn the center console, armrest, map pocket and speaker grills.

As Audi is targetiing the young hipster crowd who want lots of personalization (the company is leaving no check box option undiscovered) you can even customize the coloring of the air vents or have a white halo glow behind the subwoofer bezel (ooooh!). Audi’s LED package provides 100% LED lighting, a first for the compact class. In addition, there is an optional MMI control and infotainment system with 6.5-inch screen, 465-watt Bose audio system with 10 speakers, a 20 gig hard-drive for music, Bluetooth connectivity and 3D navigation maps.

The 2011 Audi A1 will be motivated by 4 different turbocharged engine variations – two TFSI gas and two TDI diesel powerplants – delivering power to the front wheels. This is a departure from the company’s modern day push to all-wheel drive across their lineup. The diesel engines have a displacement of 1.6-liters with one offering 90 horsepower and 169 lb-ft torque and the other 105 horsepower and 184 lb-ft of torque, both coupled with a 5-speed manual transmissions. The TDI powerplants offer fuel economy of about 62 mpg.

The 1.2-liter gas engine offers 86 hp and 118 lb-ft of torque via a 5-speed manual while the 1.4-liter mill puts out 122 hp and 147 lb-ft of torque via a six-speed gearbox. A seven-speed S tronic transmission is also available. The TFSI gas engines provide fuel economy of roughly 46 mpg. Not only are all of these engines outfitted with start/stop technology to increase fuel efficiency and reduce emmissions, but the A1 also has a brake-energy-regeneration system.

Audi has high hopes for its MINI Cooper-killer and plans to unload 100,000 A1s each year. In order to reach this goal, Audi is going to offer a variety of flavors including a five-door version (similar to the A1 Sportback concept), a wagon (which will probably drop the beginning of next year) as well as a cloth-top convertible for 2012. But it’s really the Audi S1 that we are physched about… The prevailing wisdom is that it will be available only in standard three-door hatchback form with a turbocharged 4-cylinder putting out 180 hp and equipped with a 7-speed dual-clutch gearbox. Unfortunately, those of us in the US will have to live vicariously through our brethren across the pond as the S1 is not planned for our shores. We look forward to plenty of tuning variations from the likes of G-Power, ABT, Cargraphic, MTM and others.