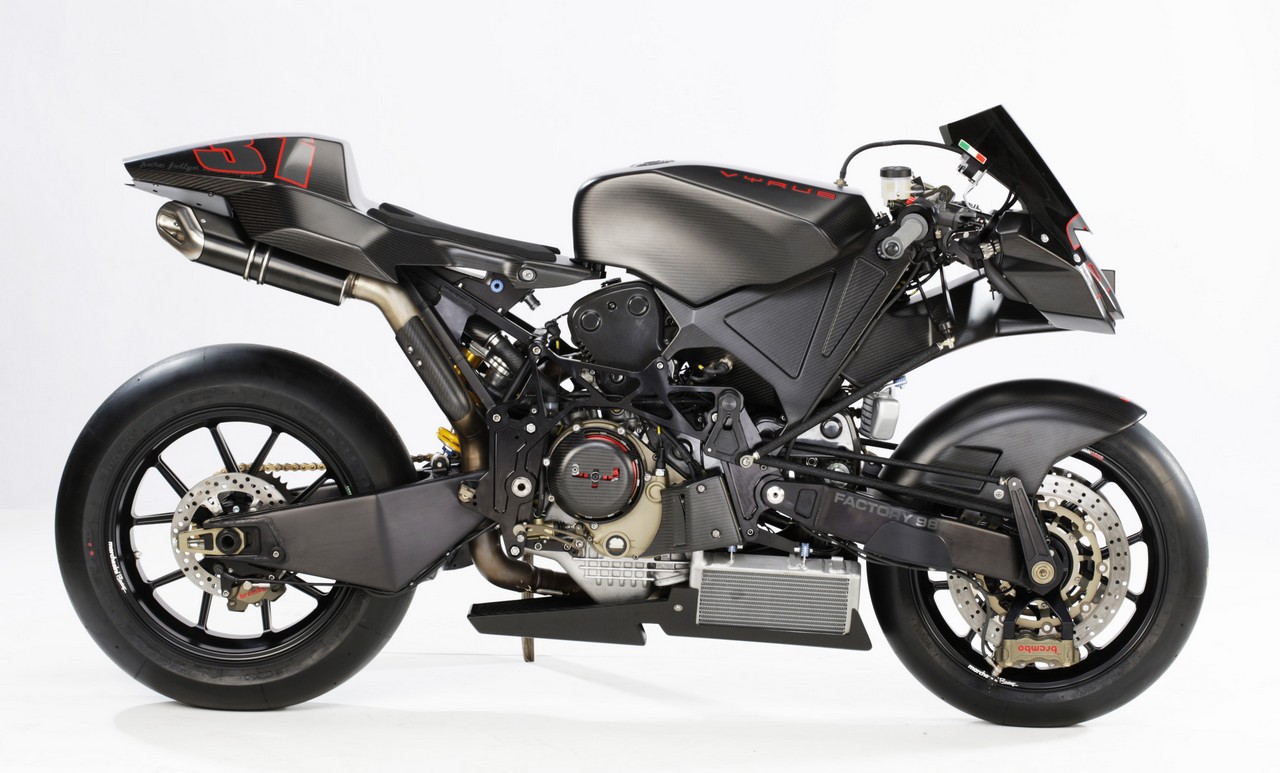 Even the most dyed-in-the-wool motorcycle enthusiasts may not know the name Vyrus, a small manufacturer based in Rimini, Italy, who has quietly been putting out some of the most refined, visually stunning and best performing bikes in the world. This shop is headed by the likes of Ascanio Rodorigo, a long-time collaborator with Massimo Tamburini of Bimota fame. Vyrus currently has four models in its lineup, any one of which would make a fine addition to our running wish list.

What makes bikes from Vyrus so unique is that they showcase all of their technological advancements right there on the exterior in plain sight, and the result is marvelous. Their bikes have another signature look which is the lack of a front folk. This unit is replaced by a swing arm mounted directly to the frame. Their hand-crafted wonders are meticulously executed and feature highly technical components that they machine and mill in- house.

And here is where the magic happens… The Vyrus 987 C3 4V V takes the base model and adds a supercharger good for an addition 27 bhp. Weighing only 6.6 pounds more and having a 211 horsepower engine handily give it the title of the world’s most powerful production motorcycle. To get this kind of action you need at least €74,000 (~$100,000)

Rodorigo sums up the essence of the Vyrus brand in the following words:

“I was a young boy, at the airport of Rimini the Ferrari Team came with a tester and a F40 to make brakes homologation. My father, a jet fighter pilot, was invited to participate and was inside the car. Happy and excited by the adventure. I walked around the car and looked at every particular. Lights, dashboard, internal equipment, everything did tell me I thought that was the best thing I could see at that time, the enthusiasm of my father become virulent because his approval of noise, velocity, real sensations and feeling. What a beauty!

My dream was a production of little series of bikes that could give me the fantastic sensation of a Race GP motorcycle but with lights and lateral stand!

The rear swing arm hand bended and welded to be the strongest and lightest possible, the special bolts machine worked to save 3 grams each, the seat with 8 mm foam to have the best feeling in drive, the carbon fibre everywhere, the fuel tank cap screw type, the bleeding system of fuel and engine vapour running in carbon fibre canisters, injection and ignition controlled by the most advanced computer, cable wiring almost invisible but the most complicate available, Racing style dashboards, the best brakes. All the best for a “Championship with a license plate”: the dream became true with Vyrus. I never had compromise since was young boy, why should I change now?”