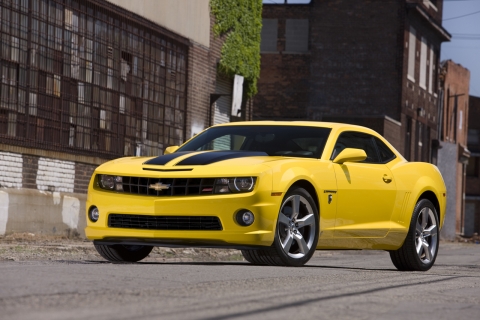 Today at the uber-popular art fest at Comic-Con in San Diego, the 2010 Chevy Camaro TRANSFORMERS Special Edition was announced as an add-on package for $995. This purely cosmetic offering includes:

* AUTOBOT shields on the driver and passenger side panels, on wheel center caps and embroidered on the interior center console;

* TRANSFORMERS logos on the driver and passenger doors’ sill plates and embedded into the hood rally stripes;

The TRANSFORMERS Special Edition can be ordered for either the Rally Yellow LT or SS (including those with the RS appearance package) models. 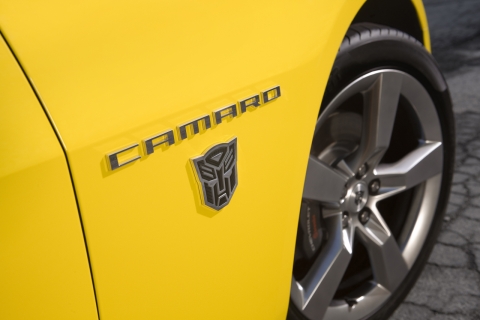 The 2010 Camaro LT is powered by a 3.6L V6 engine with 304 horsepower and 273 lb.-ft. of torque. A six-speed manual transmission comes standard while a six-speed automatic with TAPshift control for the gearbox is also available. The 2010 Camaro SS offers a more aggressive 6.2L V-8, with your choice of a six-speed manual or six-speed automatic transmission. Manual transmission-equipped models come with an LS3 engine rated at 426 hp and 420 lb.-ft. of torque. The automatic version has a new, L99 V-8 engine based on the LS3, but includes GM’s Active Fuel Management feature to reduce fuel consumption. It’s slightly less powerful with only 400 horsepower and 410 lb-ft of torque. 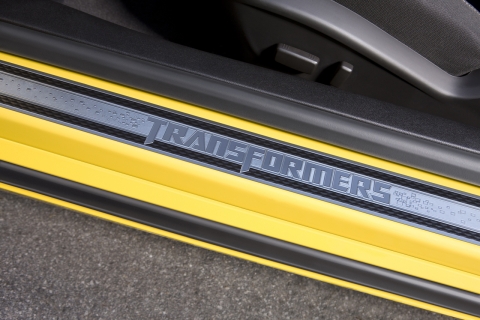 Many people may be let down by this lukewarm Transformer Special Edition package. By now I’ve already come to terms with the fact that this 2010 Camaro won’t be outfitted with a plasma cannon, missile launchers or morph into a robot as in the Transformers Movie. But it also has no performance upgrades and no creative add-ons. For instance, it could have just included something simple like having washer fluid spray onto the headlights to mimic when Bumblebee was crying in The Revenge of the Fallen (maybe that’s not the best example). Or Chevy could have made it more closely resemble the vehicle from the film by using the Z28 hood scoop, ground effects kit, front splitter and beefier wheels and tires.

In any case, the look of the 2010 Transformers “Bumblebee” Special Edition Chevy Camaro is still pretty cool and if you don’t want all the Hasbro branding, you can just order your car in Rally Yellow and get the optional black stripe for a nominal $470. 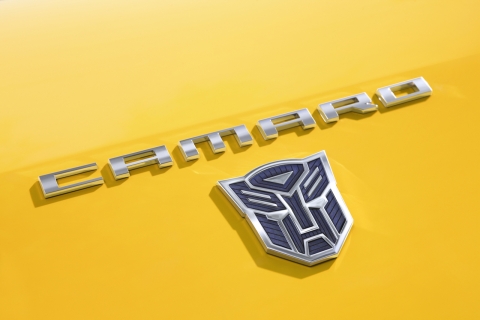