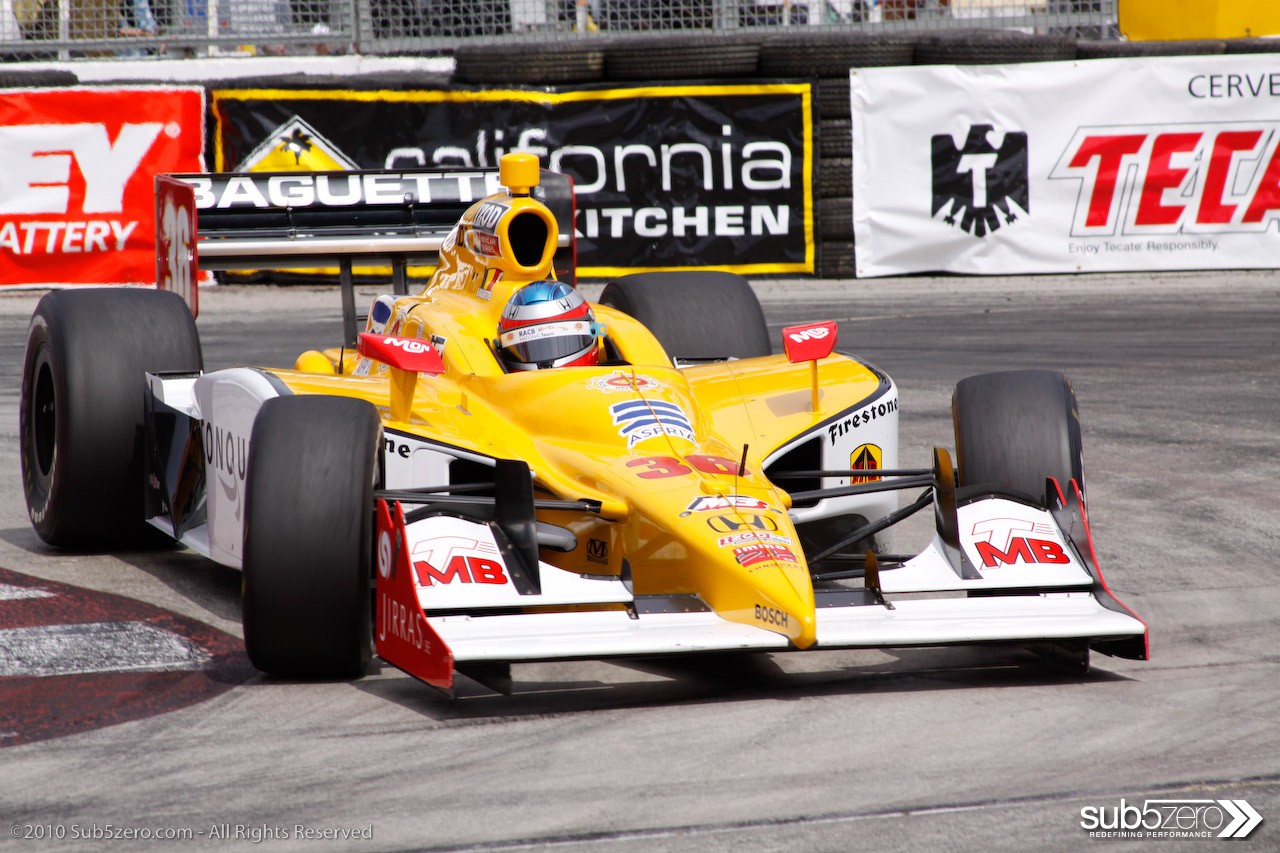 In addition, a massive Lifestyle Expo was held, showcasing tons of automotive related products and services along with fun family activities like a BMW bike stunt demonstration. A continuing trend was the proliferation of green and eco-friendly motoring with Toyota leading the charge as they showcased their “Green-Power Prix-View” with alternative energy cars. Below is a brief recap of the three major races of the weekend – ALMS, World Challenge and IndyCar. 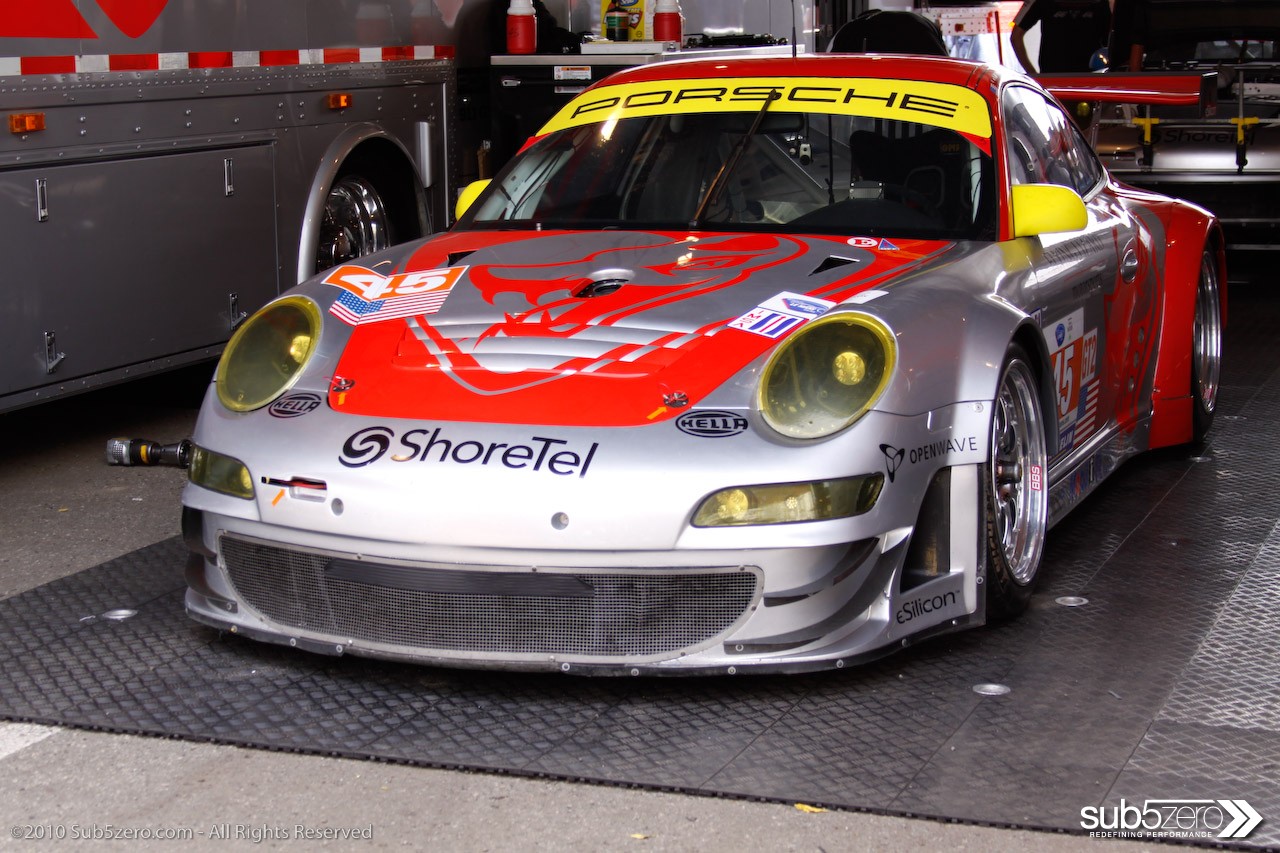 Sebring marked the first event of the season but it was Long Beach that saw the former purpose-built LMP1 and LMP2 race cars running in the new LMP class alongside the slower LMPC class. In addition, Long Beach saw the first action with the new GT2 class (similar to the old GT class) running with the GTC, which is basically a spec series for Porsche.

In the GT class, Jörg Bergmeister and Patrick Long took the win in their Flying Lizard Motorsports Porsche 911 GT3 RSR. They finished with a four second lead over Jan Magnussen and Johnny O’Connell in their Corvette Racing C6.R.

Butch Leitzinger and Juan Gonzalez are now two for two in the GTC class in their Alex Job Racing Porsche 911 GT3 Cup car. They finished 1.753 seconds ahead of James Sofronas and Bret Curtis of GMG Racing.

Gunnar Jeannette and Elton Julian piloted their G-Oil Green Earth Team Gunnar Oreca FLM09 to a win in LMPC. This marked their first win as drivers and as a team, and was vindication for their loss to the second place contenders Christophe Bouchut and Scott Tucker from Level 5 Motorsports at Sebring. They finished a full lap ahead and won by a wide margin.

Simon Pagenaud and David Brabham picked up an early time penalty for “avoidable contact” with Harold Primat and Adrian Fernandez’s Lola-Aston Martin, but still edged out a win by 0.353 seconds after a pass on the final lap after the two ran consistently close for the entire race. 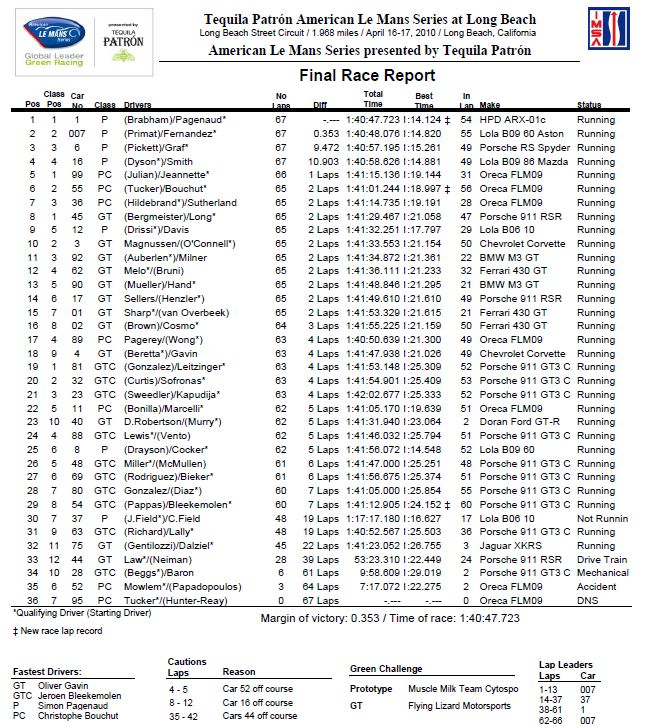 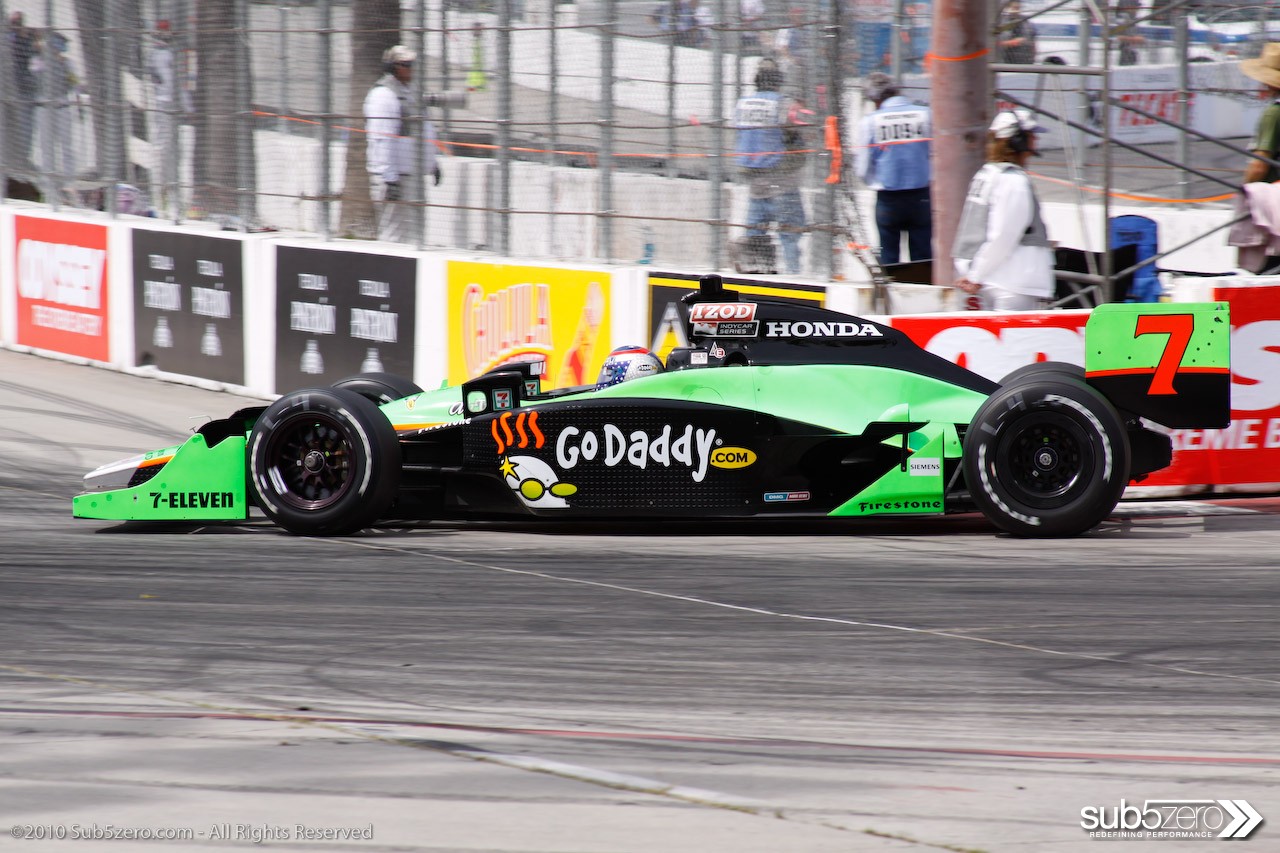 A little history first… This is the top level of open wheel racing in America. IndyCar got it roots in 1996 when Tony George, the founder of the Indianapolis Motor Speedway, created the league to compete against CART as a lower cost alternative. Last year, IndyCar and Champ Car merged to unify open wheel racing with the new series sanctioned by the Indy Racing League. The Chassis are all currently built by Dallara while those from Panoz, Riley & Scott and Falcon Cars have been phased out. As Honda is the sole engine manufacturer through 2010, IndyCars all use the same 3.5-liter naturally aspirated V8 capable of producing 650 hp (rev-limited to 10,300) rpms. Curb weight is around 1,525 pounds on oval tracks and 1,600 pounds on road courses. The transmission is a 6 speed gearbox with paddle shifters. Steering is handled by operating a manual, rack and pinion based system. Top speed is around 240 mph. This race was held on April 18th, 2010 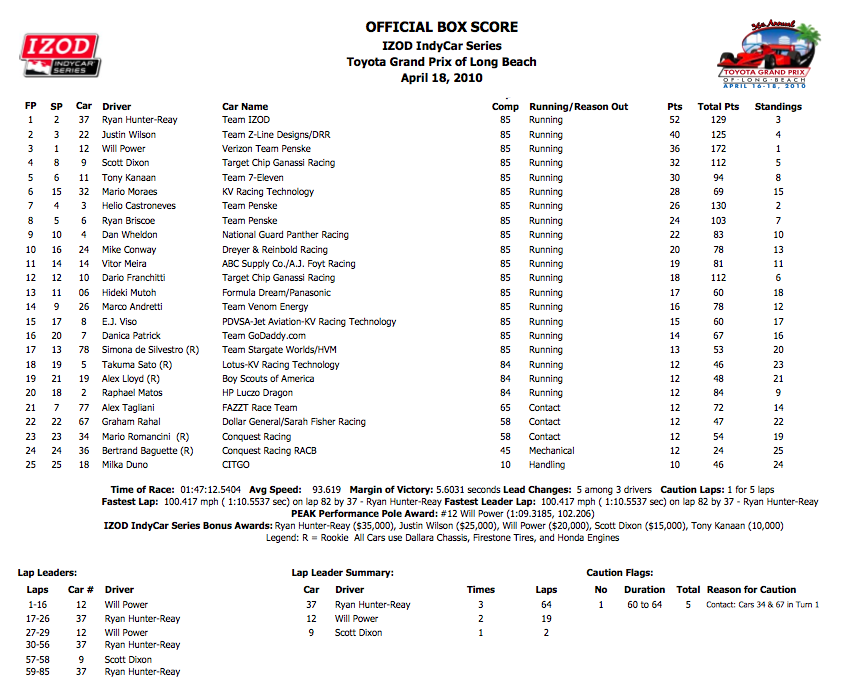 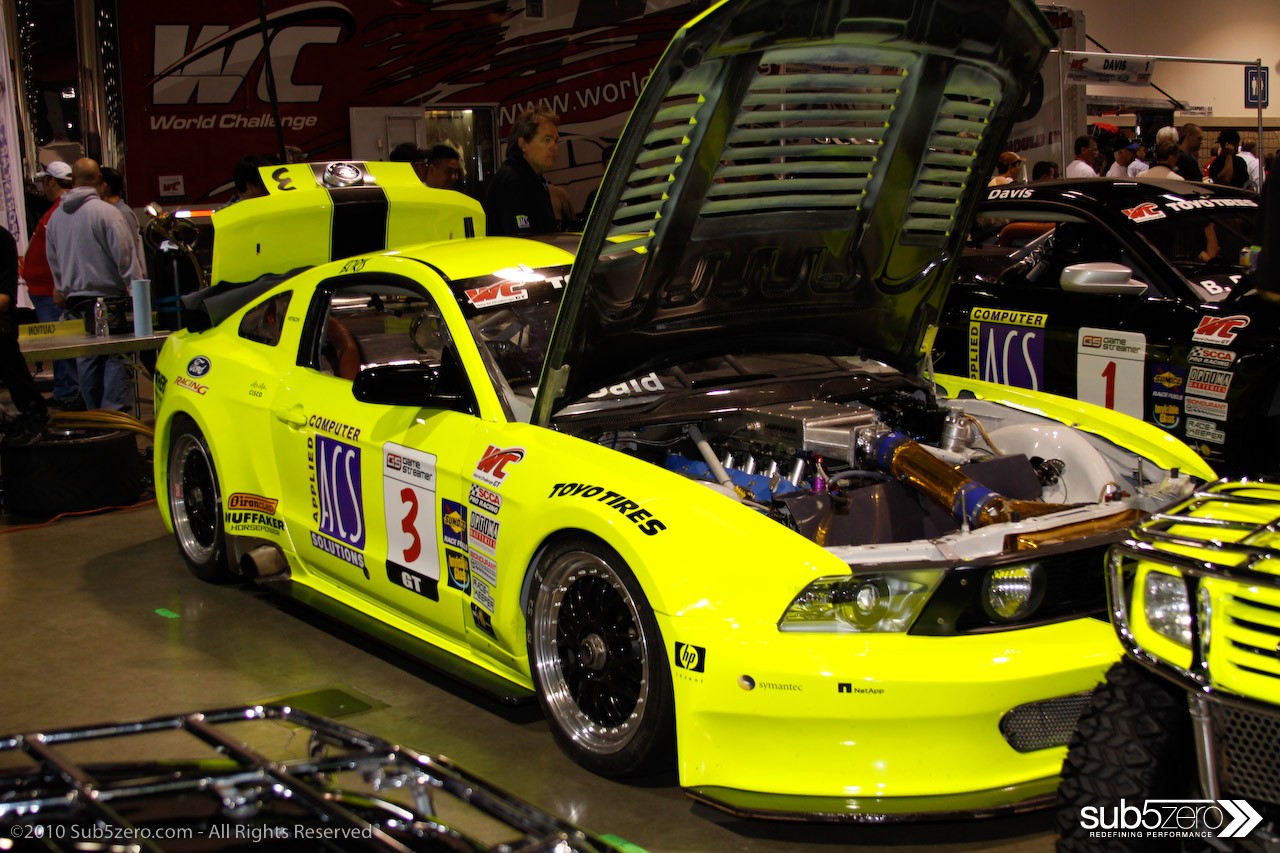 This race had the smallest following of the 2010 Toyota Grand Prix of Long Beach but was just as exciting as all the others. The World Challenge GT racing series is sanctioned by the Sports Car Club of America (SCCA) and usually involves both touring and grand touring vehicles. Grand Touring cars can be sedans, coupes or convertibles, either rear-wheel or all-wheel drive with between 350 and 550 bhp (forced induction allowed). Touring cars have to be four-seaters that are either front, rear or all-wheel drive with a horsepower range between 240 and 290 bhp from natural aspirated engines up to 2.8 liters (forced induction allowed only if factory installed). Grand Touring cars include the Aston Martin DB9, Audi RS6, BMW M3, Ferrari F430, Lamborghini Gallardo, Mitsubishi Evo, Pontiac GTO, Volvo S60, Porsche GT3, etc. Touring cars include the Acura Integra, Audi A4, Lexus IS300, Mazda6, Scion tC, etc. That said, because of the tight schedule, only the Grand Touring cars were able to run. Each race lasts 50 minutes. 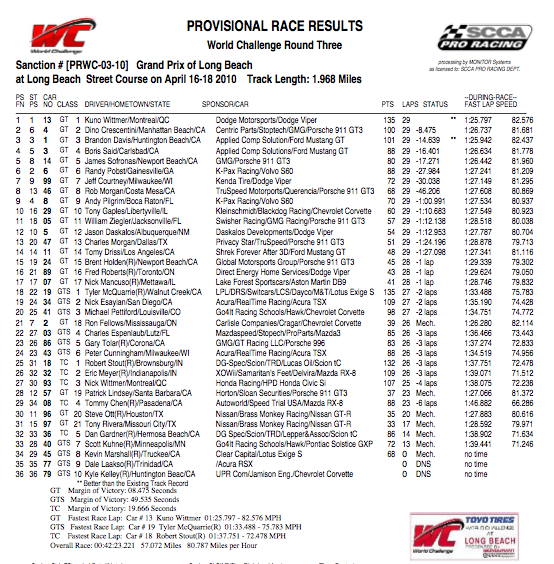