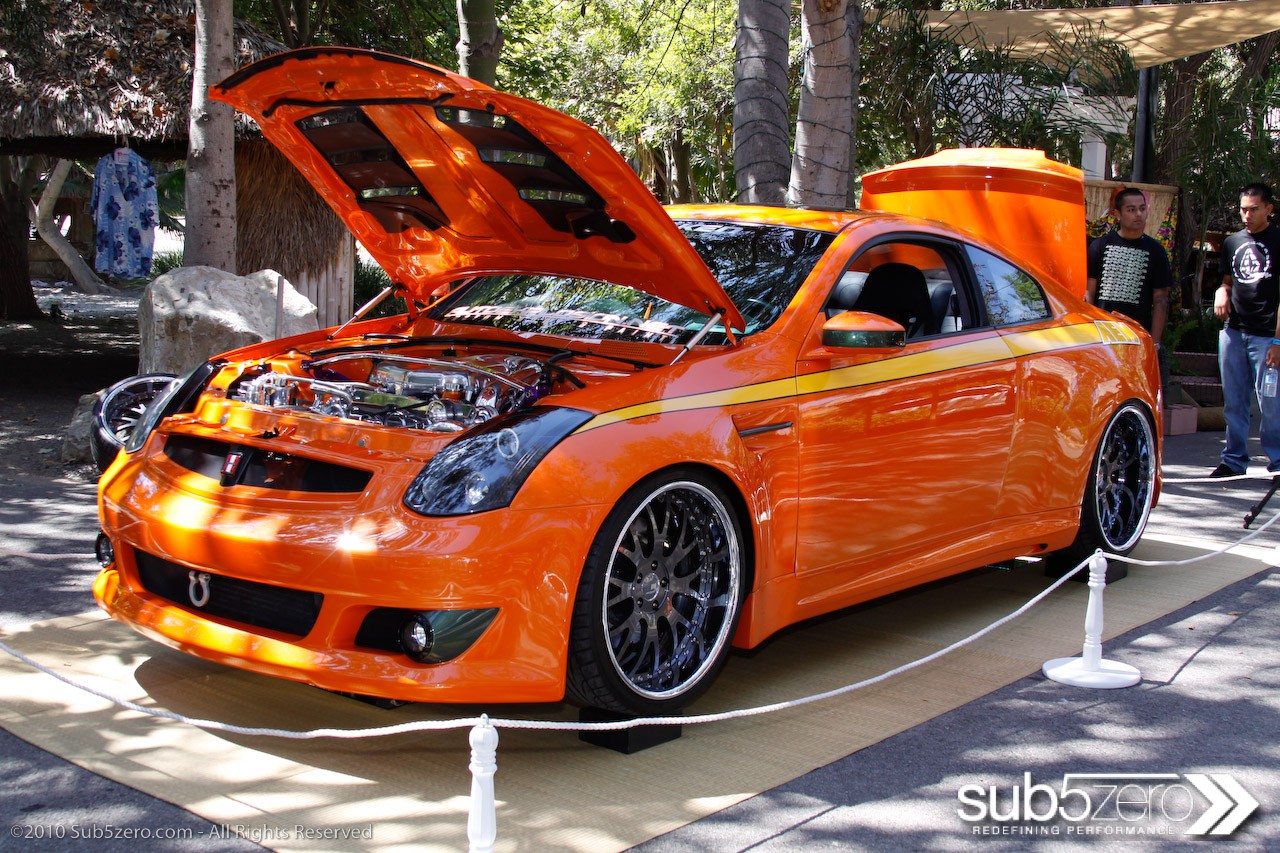 Another beautiful summer weekend in Southern California brought yet another car show! On Saturday August 7th, RPM Event Series 2010 made its way down to Hidden Valley Event Park in Irvine, CA. The day started off really overcast in LA as we made our trek down to Orange County, but we were hopeful that the marine layer would burn off. Luckily the sun made its way through the clouds as we made our way to Irvine!

The venue was definitely unique, I’d never been to Hidden Valley Event Park. Right next door to Wild Rivers Water Park and Verizon Wireless Amphitheater, it’s definitely a hidden treasure. The lay out of the event was a bit more of a workout then some of the other events done in convention centers and the sort, but we didn’t mind. The cars were basically the same as most of the SoCal shows this year. There were a few newcomers here and there, a few changes to some of the usual favorites, but nothing that exciting. I was a lot more excited to see the large motorcycle scene that the show had to offer, and of course the beautiful models! 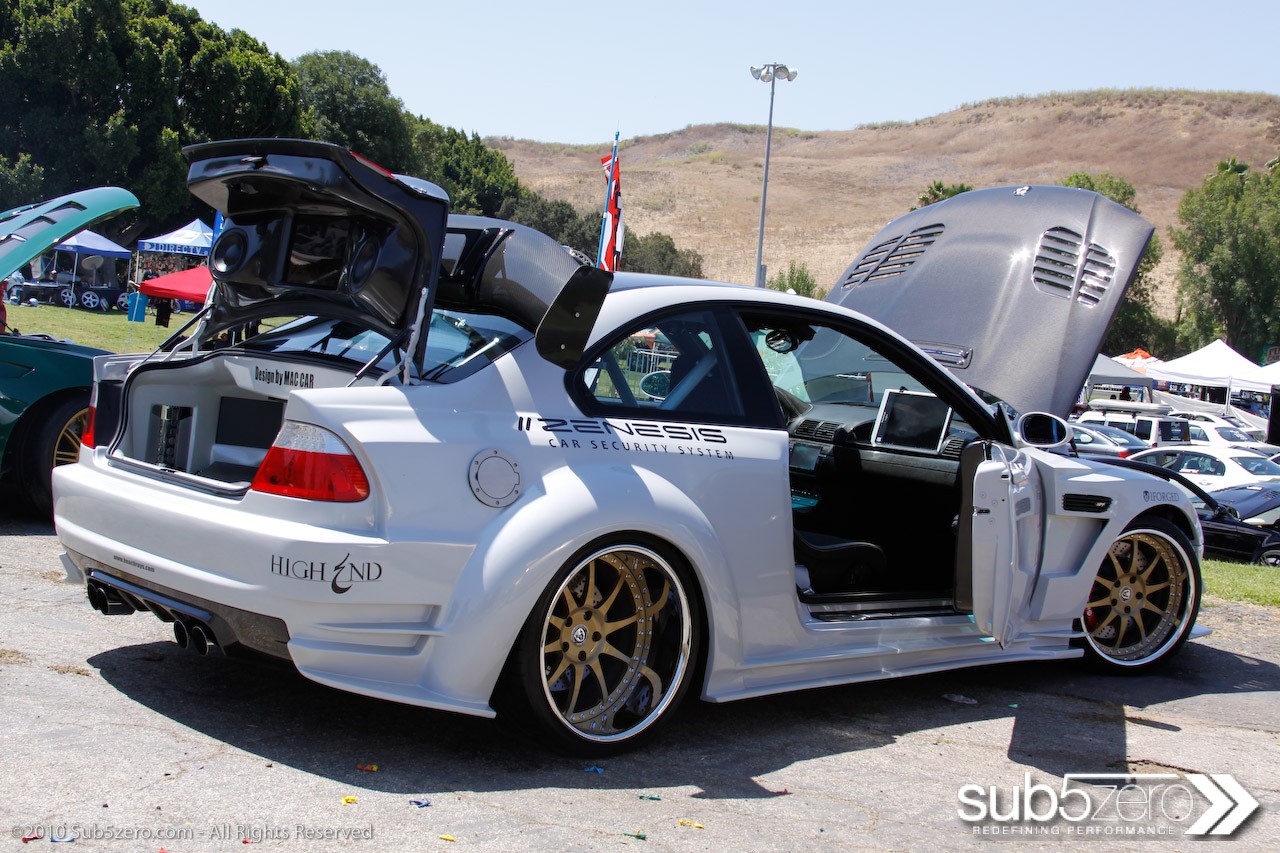 As I ate my ice cream that I got from Archie’s Ice Cream truck, we made our way through the masses. The music played on the main stage was on point – lots of Dubstep, and Electronica. There was a nice variety of cars this time, not just JDM like some of the shows we’ve been to this year. A few cars really stood out to me at the show, that I hadn’t seen before: 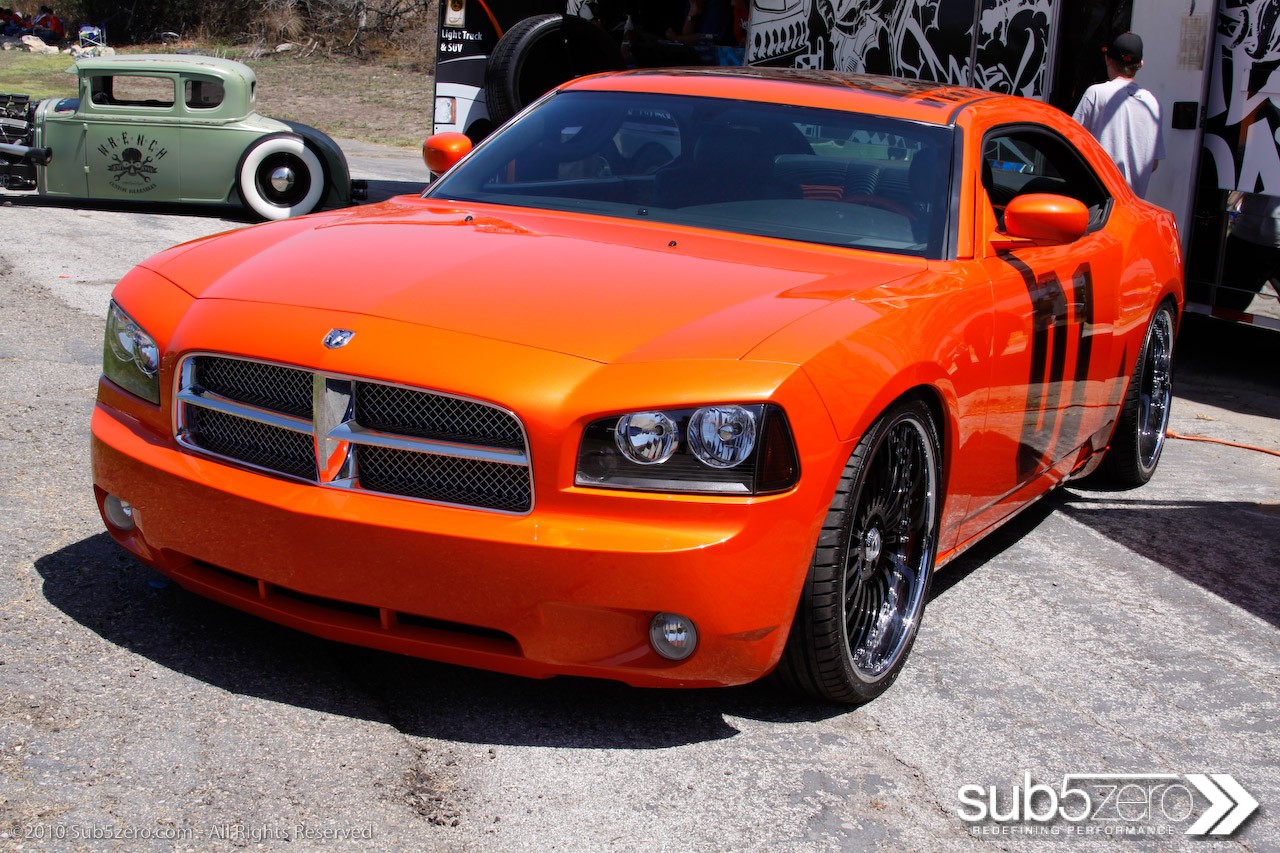 This custom 2 door Dodge Charger was built by the famous West Coast Customs. This car was put together well before the current 2 door Challenger came out. I always wondered why Chrysler never came out with a 2 door model like the original. The guys from West Coast Customs did an amazing job with this car! They shortened the chassis 4 inches, and made the body lines flow like they came straight from the factory. This car looked hot; much better than any 4 door Charger I’ve seen. 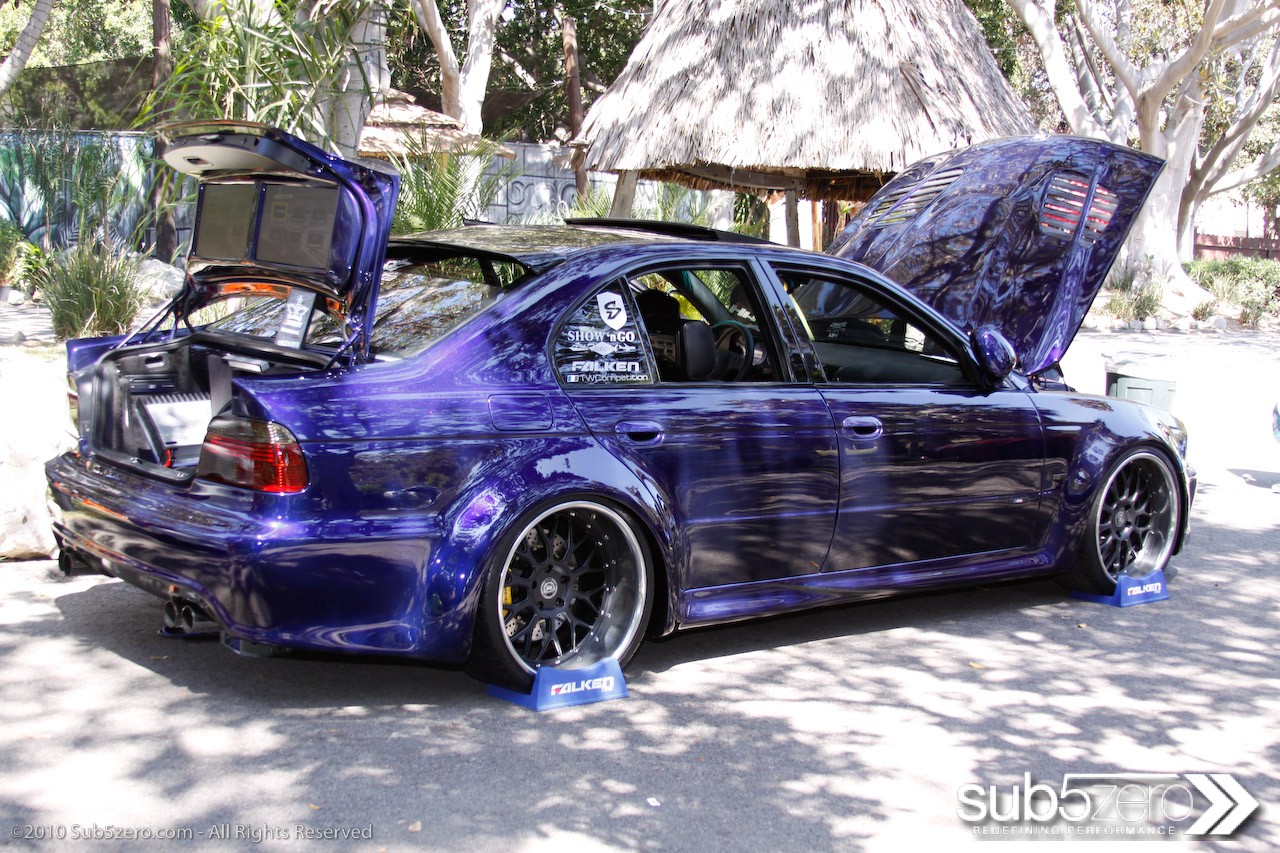 I was taken away by the flawless custom wide-body work done on this E39 M5. The aggressive flares, matched with a wicked metallic blue paint job, and some crazy dished wheels, definitely got my attention. I’m usually not a fan of body kits on bigger bodied cars, but this M5 looked mean! I spoke with the owner, he was a really cool guy. He said he would be supercharging the car soon, which would turn it into acompletely different animal! 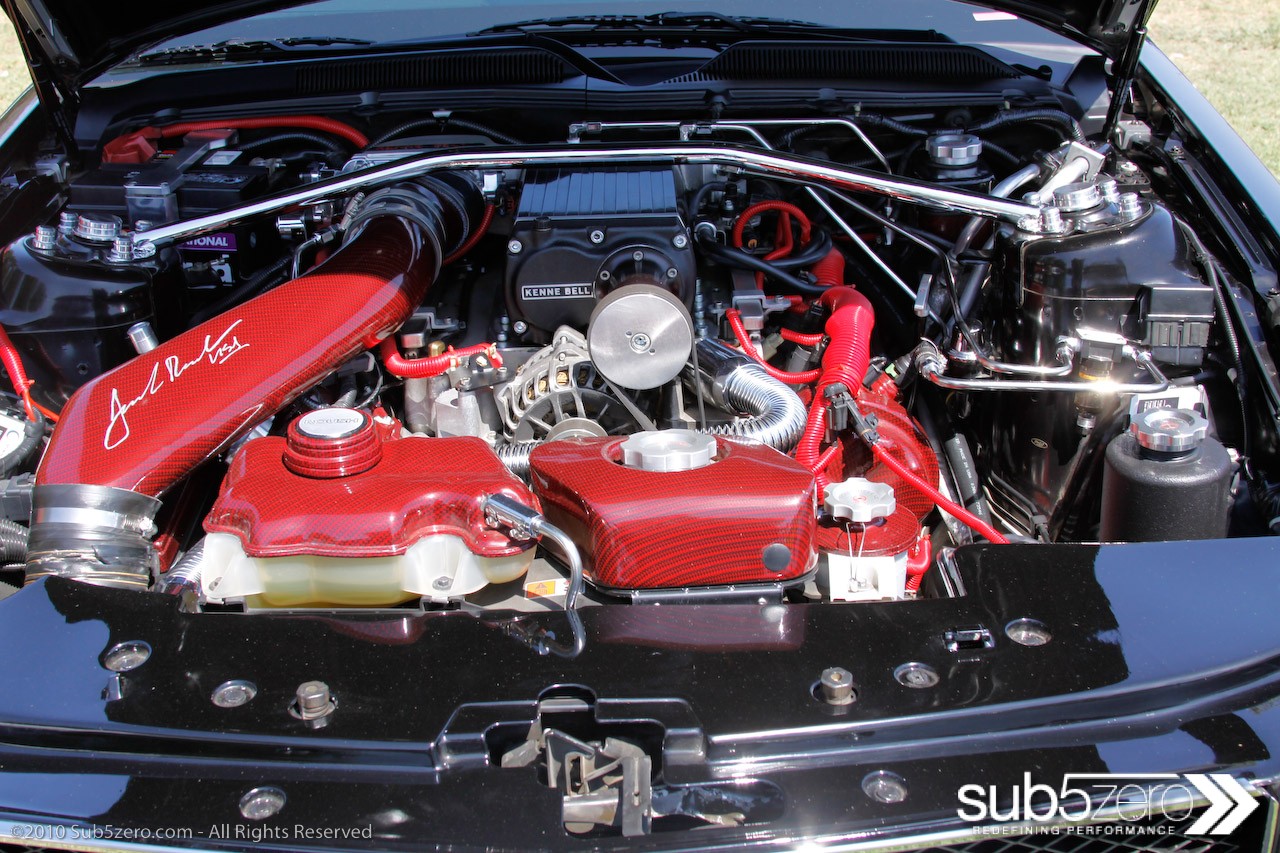 There’s nothing like a beautiful Kenne Bell roots blower sitting on top of a high strung V8. This new era Roush Stage 3+ Mustang had all the bells and whistles. I really wish that the owner would’ve fired this bad boy up; I love the whiny sound that the Kenne Bell superchargers make on the DOHC V8s! 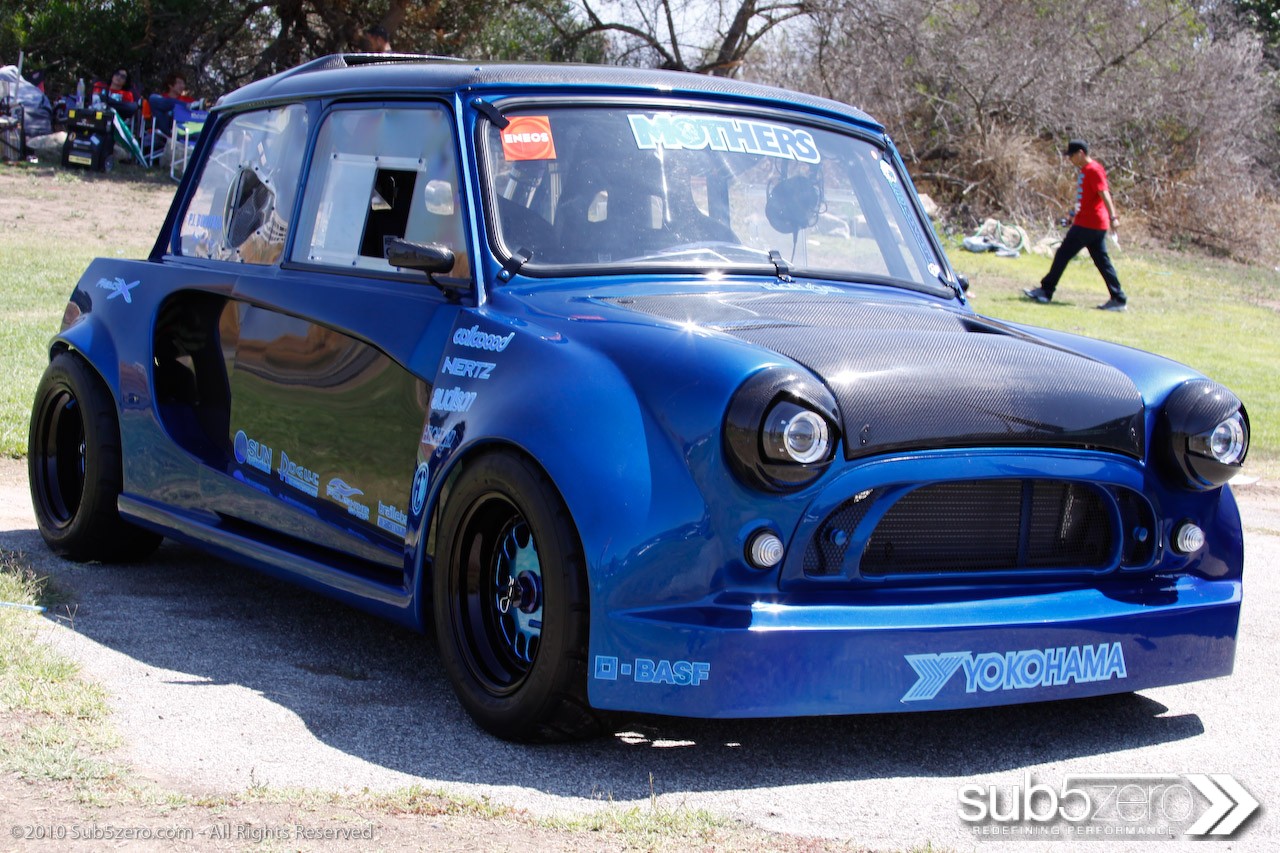 This had to be my favorite car at the show. This original Mini Cooper has been completely transformed into a modern street demon! I’ve never seen a Mini look so intimidating! Squinted eyelids house the modern projector style headlights, super wide-body flares, aggressive stance, and the mandrel bent stainless steel exhaust, let you know this is no average Mini. This car is mid-engine, rear wheel drive, and looks like it would be a blast to drive at an Auto-X event! I want to find out more about the motor set-up; looks like it may have some form of forced induction as well.

While I’ve always been more of a car guy, I was really impressed with all the hooked up motorcycles that made it to the show. I was also taken away by the stunt riders; those guys are crazy! Something about doing tricks on a fast moving pair of wheels, just gives me goosebumps. I have to give the riders credit, you wouldn’t catch me dead trying to do those kind of things on a bike! 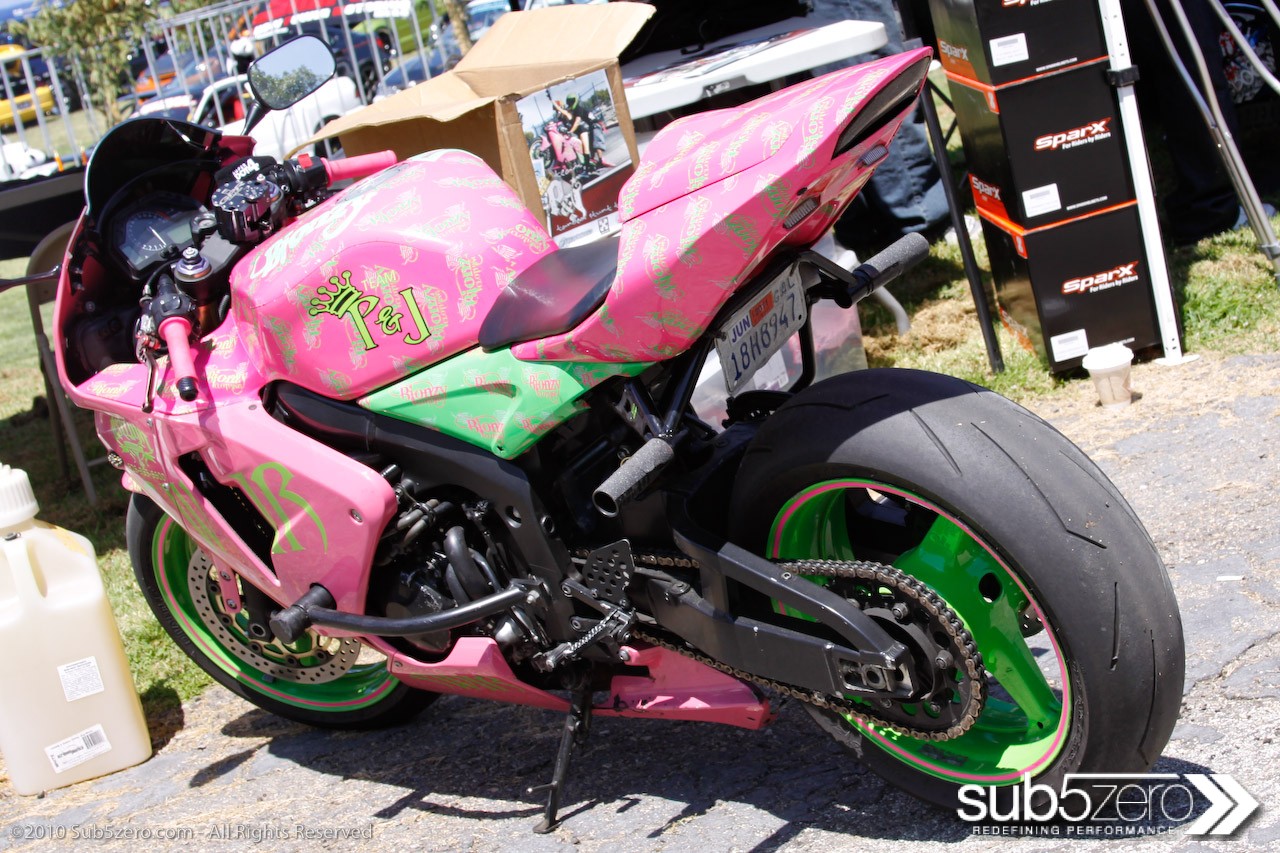 I liked how loud and flashy this bike looked – the pink and green theme really made it stand apart from the rest of the bikes at the event. 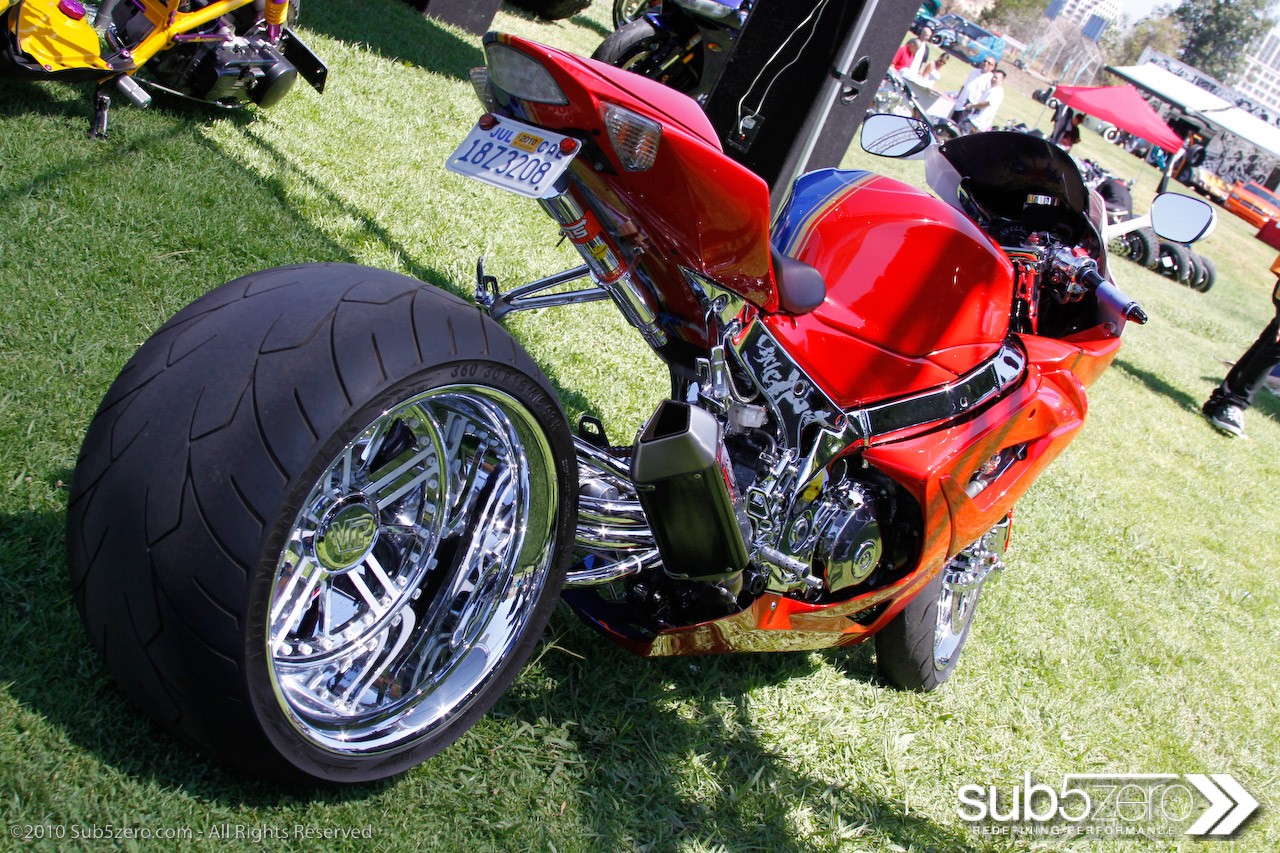 The rear wheels on some of the bikes are like the one’s you’d find on the back of a Corvette. I’m wondering how such a staggered tire set-up effects the handling of the bike, I can’t imagine it to be very beneficial. Also how much do these tires go for? Must be a lot, because they definitely aren’t a common size. 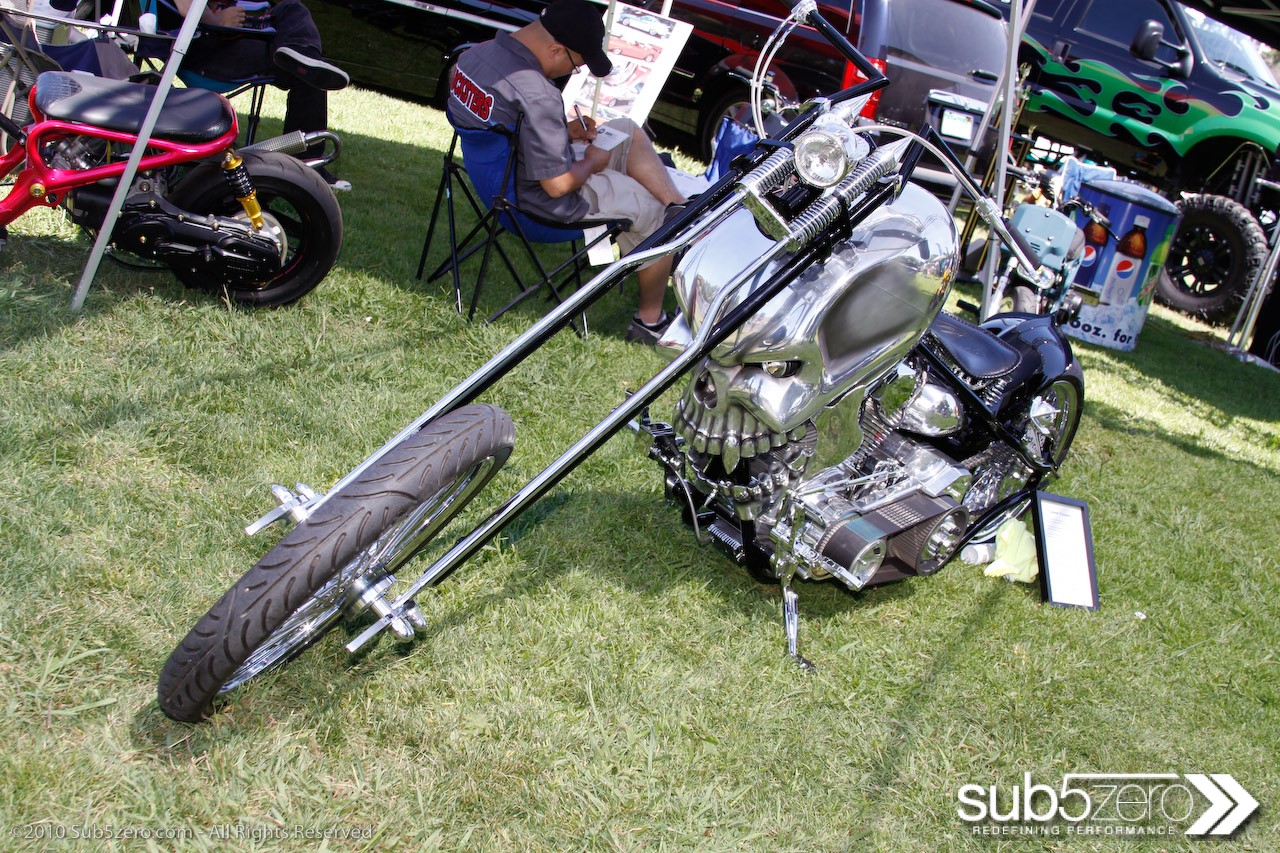 I had to leave the best for last. This chopper has to be the coolest motorcycle I’ve ever seen! The custom skull gas tank looked amazing. They should have had Nicholas Cage riding this bike in the Ghost Rider movie, it would’ve fit in perfectly! I wonder how long it took to make that gas tank, the work on the bike was truly top notch. I gotta start saving my money, because a bike like that costs over $100,000!

All in all the RPM Event Series was a good show. As always – hot cars, hot women, and hot Cali weather make for a fun day. Thanks to everyone at RPM for hosting the show, I can’t think of anything better to do on a bright and sunny summer day!