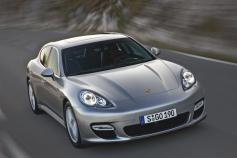 After months of leaked details, spy photos and Porsche teasers the Panamera’s official stats have been introduced into the wild. Basically, it’s going to be a big performance sedan that can go really fast. The car will be 76 inches wide, 55.8 inches tall and 195.7 inches long. A set of 3 engines eventually will be available. In the typical Porsche trifecta offering, a Panamera, Panamera S and Panamera Turbo will provide 300 hp, 405 hp and 500 hp engines respectively. Sources at Motor Authority state that prices in Europe will range from $100,000 for the base model to $156,000for the Turbo. Sales begin in April 2009 with an official world debut at the Geneva Motor Show in March.

Porsche will offer both rear-wheel and all-wheel drive power-trains as well as a choice between a six speed manual, new 7 speed dual-clutch PDK Doppelkupplungsgetriebe transmission or Double Clutch Gearbox. Diesel and hybrid variants are also in the works. Sales targets are pegged at 20,000 per year.