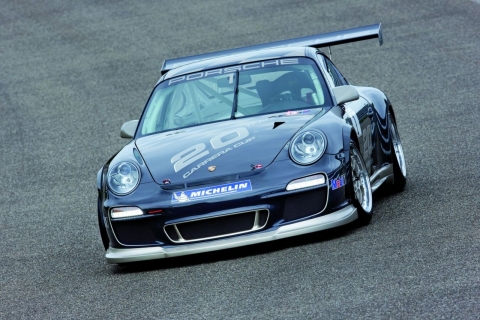 The Porsche 911 GT3 Cup is one of the most widely used competition vehicles in the world, with various single-make racing series devoted entirely to this car. For the first time, it is now based on the Porsche 911 GT3 RS but with significant weight reduction and many upgrades for use on the track. However, the engine is the same 3.8-liter flat six power unit pushing out 450 bhp mated with a sequential six-speed manual gearbox. Total weight is a svelte 2,646 pounds.

The cost for the new Porsche 911 GT3 Cup is 149,850 Euros or about $213,000. As the saying goes, you can get any color you want as long as it’s Carrera White. Deliveries will start arriving in October. The new GT3 Cup race car will make its official debut at the 2009 Frankfurt Motor Show and then go on to run in Porsche Mobile1 Supercup (at F1 races), Porsche Carrera Cups (Germany, Asia, Japan, Italy) and GT3 Cup Challenges (in the US and Middle East.)