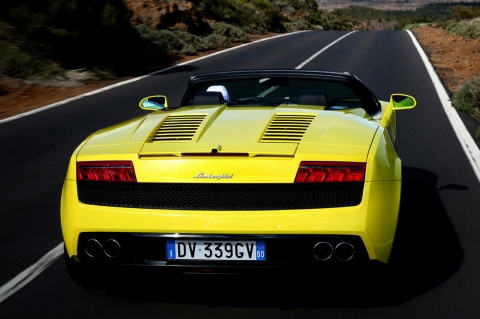 Every now and then the motherload of supercar photos gets released. The exotic car gods have just showered us with tons of images of the new 2010 Lamborghini Gallardo LP560-4 Spyder. This version sports 40 horsepower more than its predecessor with a 5.2-liter V10 engine packing 552 horsepower and 398 lb-ft of torque. But thanks to the marvels of Lamborghini engineering, it gets 18% better gas mileage (16 mpg combined rating). The Gallardo LP 560-4 Spyder also is 44 pounds lighter than last year’s model and can perform the 0 to 62 mph sprint in 4 seconds flat with a top speed of 201 mph. This Lambo bull features a new automated e.gear transmission that’s considerably lighter with shift times improved by 40% in corsa mode (for maximum acceleration.)

Compared to last year’s model, the 2010 Lamborghini Gallardo LP560-4 Spyder has a host of additional changes. The rear of the car was completely redesigned with new tail lights, air cooling vents, bumper and diffuser. It also has a new exhaust system with 4 chome-plated tail pipes. The headlamps have been updated with LED daytime running lights as well. Not only is the car super fast but the cloth top can be closed or raised in about 20 seconds with the help of a hydraulic pump and electric motor.