I remember the days when someone might get dissed for rolling in a Hyundai. That was back in ’86 or ’87 when the company first started selling cars in the US. They sold like hot cakes due to their super cheap price but were of such low quality that it almost didn’t matter. However, the car company that once was known to stand for Hope You Understand Nothing’s Driveable And Inexpensive, has come a long way since then. This year, the Hyundai Genesis was named the 2009 North America Car of the Year and Canadian Car of the Year 2009. In addition it gained the Autobytel Editor’s Choice Award along with several other accolades. The point is that Hyundai has found the right mix of product, quality and price and everyone’s taking notice.

Our eyebrows were raised with the introduction of the 2010 Hyundai Genesis Coupe which is the cheapest 300 hp car available on the market today. It compares favorably to the BMW 335i coupe and the Infinity G37. Performance-wise it is right up there with these premium brands and can hold its own.

The two engine options available for the Genesis Coupe include a 210-horsepower, 2.0-liter turbocharged unit or the 306 hp 3.8-liter V6. The later comes standard with a six-speed manual, leather upholstery, fog lights, premium door sill plates and chrome fascia accents, all for $25k. An automatic Shiftronic transmission is also available but pushes the price up to $26,500.

Hyundai offers a variety of packages such as the Grand Touring but we only really care about the Track version. This nice collection of performance upgrades includes 19″ gunmetal finished alloy wheels, track-tuned suspension, Brembo brakes with 13.4 inch rotors and 4 piston calipers and a Torsen-type limited slip-differential. The Track V6 model with manual transmission goes for $29,500 while the automatic runs $31,000.

The Hyundai Genesis Coupe has been showing up in all the right places. Last year, the SEMA show featured 3 different coupes freaked by Rhys Millen Racing (RMR), HKS and Street Concepts. The RMR version was built on a 2.0-liter prototype to create what became later known as the “Art of Speed” Genesis Coupe. Their camp performed some serious weight reduction by using carbon fiber to replace the front bumper, doors, fenders and side skirts along with other body panels. The engine was equipmed with a Turbonetics turbocharger, wastegate and blow-off valve and a custom intake manifold. Two-way adjustable KW coilovers were used to beef up the suspension along with new sway bars and adjustable lower control arms. The stock rims were replaced with SSR Type-F wheels wrapped in Bridgestone Potenza slicks with 18×9.5s in front and 18×10.5s in the rear. The final mods include a roll-cage, custom gauges and a mandatory fire suppression system. 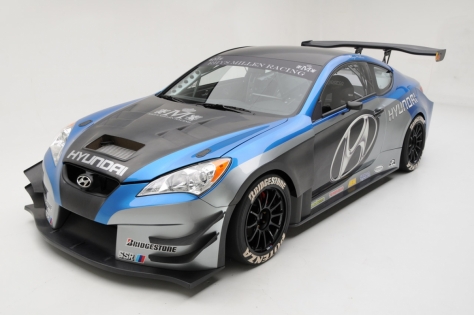 Street Concepts got their hands on the 3.8-liter V6 model which they molded into a “Stealth Fighter-inspired” vehicle that was heavier on external aesthetics and lighter on performance mods. The camoflauge paint scheme was matched with a custom grill, tinted head lights and tail lights and a large APR wing. An improved Brembo brake system was installed along with 19 inch Volk wheels fitted with Pirelli tires. Performance modifications were limited to a K&N cold air intake and a Magnaflow cat-back exhaust system. 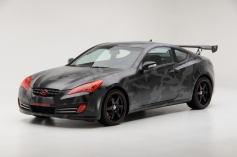 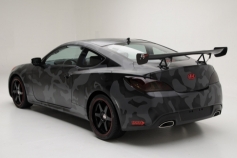 HKS was provided a turbo-charged 2.0-liter Genesis Coupe. Similar to RMR they really went to work on the performance modifications. A GT2835R turbo upgrade was installed along with an HKS stainless tubular manifold, sequential blow-off valve, carbon fiber airbox, intercooler and cat-back exhaust. The suspension system received HKS Hipermax III coilovers. And to round out the look, an aerodynamic package from Ken Style was applied.

In addition, look for the Hyundai Genesis Coupe to make its movie debut in the Fast and Furious 4 opening on April 3rd. Check out the spoiler video of the movie’s major race. Who would have thought a few years ago that a Hyundai would be featured in a franchise known for radical tuners and high-performance sport cars!