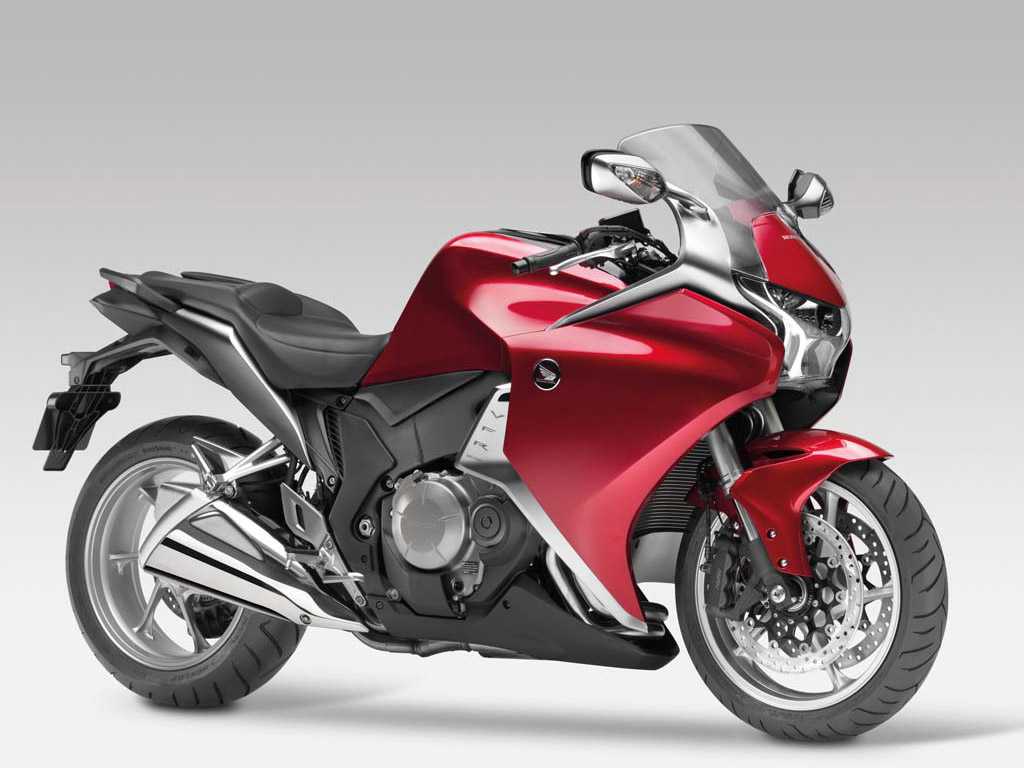 The Honda VR and VFR series of street bikes has a long and storied history. VF stands for Vee-Four while VFR means Vee-Four Racing. The name comes from the fact that when looking at the the engine along the axis of the crankshaft, the cylinders and pistons are set up in two separate banks in the shape of a V. Honda was one of the original architects of the V-type four-cylinder engine used for motorcycles. The first generation models dropped in 1982. Now, on generation seven, Honda is releasing a technological marvel with their new 2010 VFR1200F.  Available in the Spring of 2010, the new VFR will come in two forms – a standard model and a one equipped with a dual-clutch automatic transmission, an industry first for a large-displacement bike.

The new Honda VFR1200F sports a 1,237cc V4 motor featuring a unicam crankshaft, variable cylinder management, offset cylinder spacing and throttle-by-wire with an output of 172hp and 95 lb-ft of torque. This is a big engine for a big bike. The European version will tip the scales at 588 lbs with the US version weighing in at 591 pounds. If you opt for the dual-clutch model, the extra heft pushes the weight to 613 pounds.

The 2010 VFR1200F has a vacuum-moulded cast aluminium chassis that is stiff and strong. In order to provide a smooth ride, 43mm cartridge-type forks are located at the front and a Pro-Link monoshock with 25 positions of spring preload adjustability located in back. This bike uses Honda’s new shaft-drive which has been configured to put a stop to the rocking motion that is typically produced by these powertrains. Special C-ABS anti-lock brakes keep this bulky powerhouse under control. Dual full-floating 320mm discs with  six-piston calipers are located up front while a single 276mm disc with two-piston calipers can be found in back.

The conventional six-speed gearbox comes standard and features a slipper-clutch setup. However, the show stopper here is Honda’s new dual-clutch automatic transmission. Using the DSG, riders can operate the bike in either fully automatic mode or manual mode, using finger paddles to rev through the clutchless gears.

For the “historic” return of the new 2010 Honda VFR 1200F, the company is offering a full complement of options including a top box, hard panniers, a center stand, a Sat/Nav system, fairing extenders in front of the handlebars and a flip-up screen. The bike will be available in Red, Silver and White. The official unveiling takes place at the 2009 Tokyo Motor Show later this month. Official pricing should be available at that time.

This world’s first motorcycle dual clutch transmission** features a light, compact design that allows it to be combined with existing engines without substantial layout modification. Further, the new transmission delivers the precise acceleration control which riders require thanks to electronic control technology that helps ensure smooth, seamless gear changes. In order to respond to rider demands in a broad range of situations, the transmission is equipped with three operating modes, including two full-auto modes (D-mode for regular operation and S-mode for sporty riding); and a 6-speed manual mode, which delivers the same shift feel as a manual transmission. Honda intends to gradually expand the deployment of the new transmission to more and more of its large-displacement motorcycles, particularly sports models destined for use in traditional large motorcycle markets.

Honda will continue to deliver motorcycles that match the needs of society and users’ lifestyles, spreading the joy of riding and mobility.

* According to Honda survey
** Patents pending: 100

The new transmission features a dual clutch transmission configuration in which independent clutches are employed for the odd gears (1st, 3rd, 5th) and even gears (2nd, 4th, 6th), respectively. The two clutches operate alternately to effect gear changes. For example, when changing from 1st to 2nd gear, the computer detects the up-shift and engages 2nd gear, then releases the 1st-gear clutch while engaging the 2nd-gear clutch to achieve a seamless gear change. While some existing dual-clutch transmissions are bulky, the new system employs original technologies such as dual input shafts, an innovative in-line clutch design, and concentration of hydraulic circuitry beneath the engine cover to achieve a compact design. Compactness and lightness is further enhanced through the use of a simple shift mechanism design based on that of a conventional motorcycle shift drum. Optimised shift scheduling achieves fuel economy equal to or better than that of a fully manual transmission, enabling Dual Clutch Transmission to deliver both sporty riding and environmental performance combined. [/collapse]