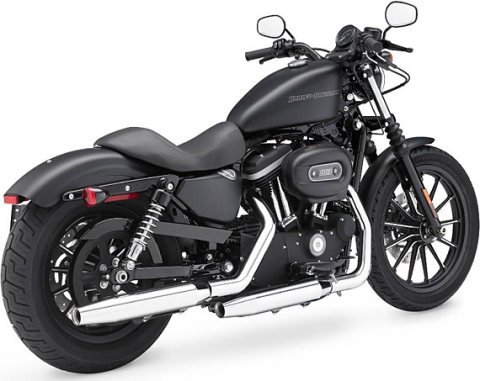 The “murdered out” black-on-black movement is not just something confined to the automotive world. It’s also becoming quite trendy with the motorcycle set as well. And as Harley-Davidson is hardly ever behind the times, often in fact, a front-runner, it’s no surprise to see them offering the “Dark Custom” line of blacked-out, matte-finished bikes.

The new 2010 Harley Davidson Sportster Iron 883 is the sixth addition to this club and comes blacked-out from fender to fender. In fact, its claim to fame is that this Sportster has more blacked-out components than any other model in the H-D family, making it the ‘darkest custom’ motorcycle in their lineup.

The 2010 Sportster Iron 883 lacks neither performance nor styling and is sure to score big points with the younger demographic Harley-Davidson is targeting. The air-cooled Evolution 883cc V-Twin engine provides all the power necessary to keep this Sportster deep in the pack. As a no-frills bike, the Iron 883 features drag-style handlebars, bare-bones dashboard, front fork gaiters, a chopped rear fender, a straight cut shorty dual exhaust, low suspension and 13-spoke cast aluminum wheels.

This Dark Custom Sportster starts at $7,999. That said, you’ll definitely want to have a bit of change in the piggy bank to spring for some of Harley’s myriad customization options. If black just isn’t your thing but you still dig the bike, there is good news as this chopper also comes in Brilliant Silver Denim.