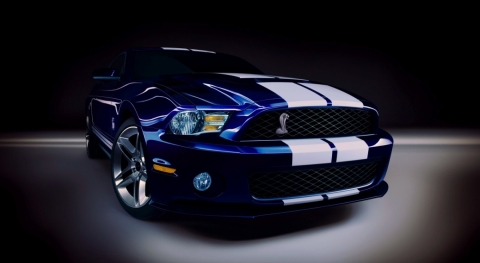 Every year engine technology gets better and better, approaching the day when we will see 500 horsepower cars getting current Prius gas mileage. A bold and misguided statement you say? The new 2010 Ford Shelby GT500 is a fine example of this trend as it grabs 40 horsepower and 30 ft-lb of torque over last year’s model and still gets 2 mpg better fuel economy. Baby steps my friends.

Special calibration tweaks and a new cold-air intake system have increased horsepower up to 540 and pushed torque to 510 ft-lb (with redline at 6,250 rpm). The powerplant itself is a supercharged and intercooled 5.4L DOHC V8 engine. The new Mustang model now gets 14 mpg while destroying urban streets and 22 mpg on the highway. The top gears were made taller which translates to better fuel economy. The sprint from 0 to 60 mph takes only 4.3 seconds. The 6 speed manual gearbox now employs a twin-disc clutch system using larger discs which are stronger and lighter, resulting in less gear clash and rattle.

Ford’s Special Vehicles Team (SVT) puts out the company’s factory tuners which are akin to those of Mercedes AMG and BMW M. They have been tweaking Ford’s various models since 1993, starting with the SVT Lightning (based on the F-150 pickup truck) and the SVT Cobra (based on the Mustang.) SVT has even produced its own models such as the Ford GT. Carol Shelby, an ex-employee and long time collaborator, jumped back into bed with Ford’s SVT unit in the effort to produce the latest Ford Shelby GT500 that launched in 2006 as a 2007 model. Since then, they also released the 2008/2009 Ford Shelby GT500KR (540 hp and 510 lb-ft torque).

Shelby has a separate Special Performance Plant where he also builds out the GT500 Super Snake with either a supercharged 605 hp version or twin-screw supercharged 725 hp model. Will we soon see another SVT collabo with outrageous horsepower as well? Let’s keep our fingers crossed. Until then, some of us will be more than satisfied with the 2010 Ford Shelby GT500 which will be arriving this spring.