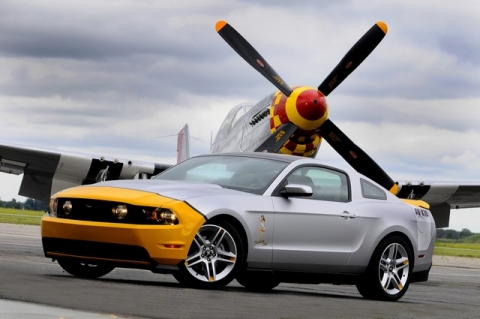 The Experimental Aircraft Association (EEA) sponsors a Gathering of Eagles charity auction each year for which a variety of participants offer up their wares for the good of society. This year Ford is providing a factory-produced one-off pony car named the 2010 Mustang AV-X10 “Dearborn Doll”, which will be on the auction block during the 2009 EAA AirVenture show in Oshkosh between July 27th and August 2nd.

This special edition Mustang GT looks right at home on the airfield with its WWII aviation-inspirated paint schema sporting a Satin Silver base with Yellow trim across the full front end and wing along with “propeller tip” accents on the wheels between the split-spoke five-start pattern. Additional badging includes a white AV-X10 strip on the back quarter-panel and Dearborn Doll fuselage pinup art on the front fenders. 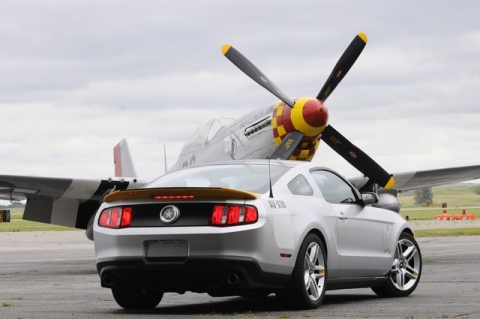 The AV-X10 “Dearborn Doll” is based on the 2010 Mustang GT with the Glassroof option. However, a series of modifications make this car unique by pulling from the Ford Racing Performance Parts bin. The most significant upgrade is the 4.6-liter V8 engine with supercharger kit that increases output to 550 horsepower. This power plant is mated to a six-speed manual with short-throw shifter. The Mustang also gets a FR550S peformance exhaust and FRPP Handling Pack featuring lowered springs, dampers and an anti-roll bar setup. The Shelby GT500 donates the lower rear fascia and rear wing for better aerodynamics. And 19″ forged-alloy SVT GT500 wheels give the car a solid and aggressive stance. 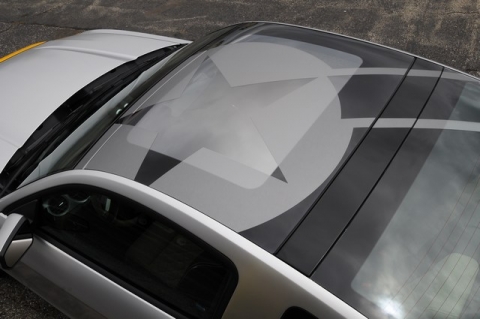 One of the coolest features of the 2010 Ford Mustang AV-X10 “Dearborn Doll” is the glass roof which incorporates a large translucent stars and bars theme. But the fun doesn’t stop there. Inside, there are illuminated AV-10 sill plates, aircraft-themed instrumentation, custom worn-in bomber-jacket leather trim, military olive-khaki lined door inserts and cockpit style seats. There is even an “Engine Start” button custom mounted in the middle of the center console.

We’ll provide an update with the sale price of the 2010 Ford Mustang AV-X10 at auction. This is a pretty compelling offering for which some lucky suitor at the Gathering of Eagles will surely be proud.