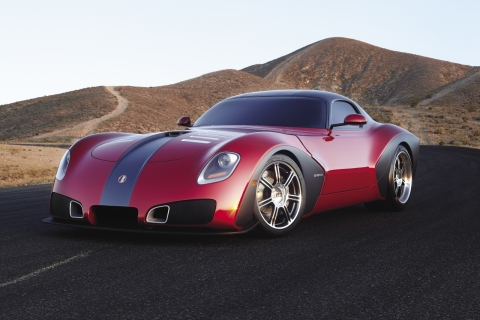 There seems to be no shortage of supercar builders emerging on the scene today. Some will come and go while others will create their own formidable legacy. Devon Motorworks, an LA based industrial design house, looks to be the latter with an all-star lineup of both business and engineering talent. After months of speculation, various artistic renderings and the occassional spy shot, the production version of the 2010 Devon GTX was unveiled at the judging stand at the Pebble Beach Concours d’Elegance. This new American supercar is designed from the ground up to both compete with and devour the likes of Ferrari, Maserati and Lamborghini.

The new 2010 Devon GTX sports an 8.4-liter V10 engine producing 650 horsepower, which makes it “the most powerful naturally aspirated production powertrain system on the market today.” To bolster all of that brawn, the car utilizes a six-speed manual gearbox incorporating a dual mass flywheel with twin-disc clutch to transfer power to the rear wheels. The Devon GTX features a steel structure and carbon-fiber body riding on a fully independent suspension system that will eventually offer a real-time damping and ride-adjustment system in late 2010.

The wheel setup is massive even by supercar standards and consists of 12-spoke aluminum forged mono-block rims measuring 18×10-inches in front and 19×13-inches in rear. Besides the 18/19 setup there is also a 19/20 option that adds taller wheels with the same width. The brakes are comprised of six piston calipers mounted on 380mm rotors in front and 4-piston calipers gripping 355mm discs in back.

Devon Motorworks has stated that they will target production runs of 36 cars per year. The standard 2010 Devon GTX will have a list price of $500,000. An upgraded racing package for more aggressive track driving commands an additional $25,000. In the spirit of bespoke craftsmanship, Devon can customize and tweak their vehicles according to customer requests. As the GTX gets more track time on the various world circuits, we are very interested to see how it compares to its Italian counterparts. Afterall, it recently set a new lap time record at the famed Laguna Seca race track. Check out the video.