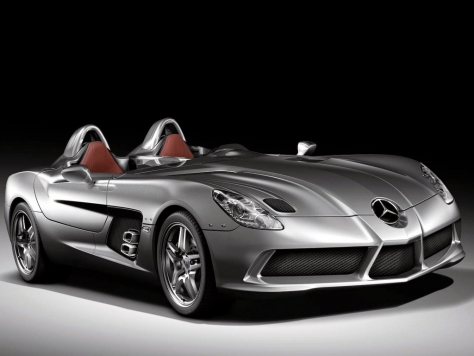 Mercedes-Benzhas introduced a new supercar that is adirect tribute to the original 300 SLR raced bythe legendary Stirling Moss in the 50s. The 2009Stirling Moss not only loses the roof but the windshield and windows as well. Similar in many ways to the original, the exhaust pipes sit just behind the front fenders, rollover bars are present and the usual SLR headlamps are swapped out for single ovoid units. Even the audio system and navigation get thown out. The Mercedes-Benz SLR Stirling Moss will make it’s debut at the 2009 Detroit Auto Show.

The engine supplied is the same one from the SLR McLaren 722. The 5.4-liter V8 puts out 650-hp, which pushes the car from 0 to 62 in 3.5 seconds. It has a top speed of 217 mph. As with other SLRs, extensive carbon fiber bodywork keeps the weight down. In case you need to make a quick deceleration from speeds above 75 mph, a retractable air brake can be deployed.

The 2009 Mercedes-Benz SLR Stirling Moss will cost a little more than $1 million dollars. Only 75 will be built between June and December of next year. The car is more of a collector’s item and, per Mercedes, is not designed for the race track. But the 2009 Stirling Moss is sure to be a thrill no matter how it’s driven.