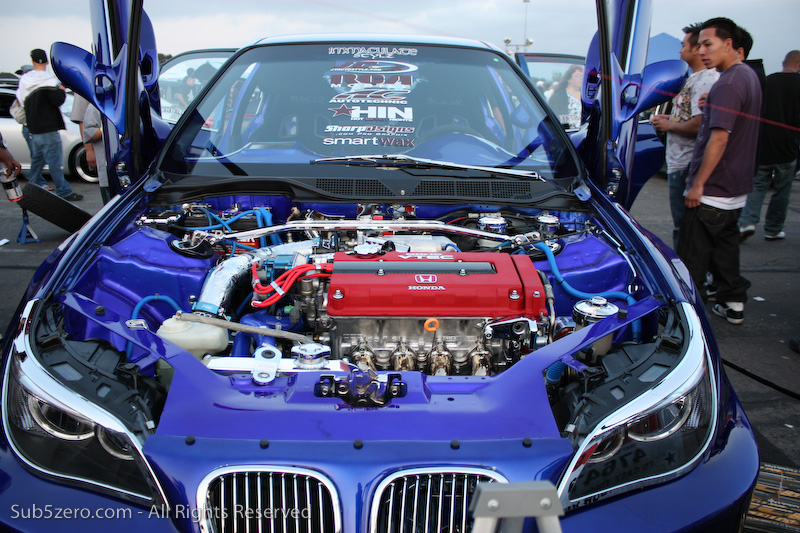 On Saturday night, Hot Import Nights (HIN) kicked off its 2009 season at Angel Stadium in Anaheim, California. In contrast to the flatness of last year’s event at the (indoor) LA Convention Center, this outdoor venue made for a dynamic, exciting, multi-dimensional show. The folks at Digital Age Motorsports, the event promoter, really outdid themselves this time around.

Upon entering the far parking lot, back to back cars were racing down a track with three posts to maneuver around in timed sessions. I say maneuver, because most attempts fell far short of drifting, although there were definitely some solid standouts. In any case, it was tremendously entertaining. This was really an opportunity for the public to show off their skills and for individuals or teams to claim bragging rights.

Later in the evening, on a separate track, professional drifters put on one hell of a show doing multiple laps around a large expanse of barricaded parking lot. And throughout the event, there were ongoing flips and totally insane tricks pulled off by Motocross pros on two monster ramps. The music acts this year were solid as well with Ya Boy, Qwes, Far East Movement, Navigator, Oso & Haji, and Solo Da Beast performing while DJ Rocky Rock was on the wheels of steel.

Hot Import Nights will hit up 19 cities this year with an expected draw of half a million car enthusiasts. Next stop is San Mateo on April 4th, followed by Austin, Texas on April 11th.