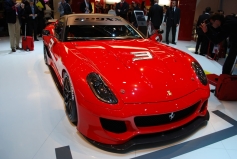 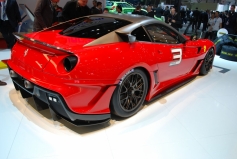 Ferrari has premiered two new iterations of their 599 GTB Fiarano in Geneva. One is outfitted with the new Handling GT Evoluzione (HGTE) package and the other is a different beast entirely. The Ferrari 599XX is a development car which incorporates all the best technologies derived from the company’s venerable F1 and R&D programs. The car walks a fine line between the track and the streets and that is what makes it so cool.

The Ferrari 599XX takes the GTB’s V12 engine and retunes it to produce over 700 hp at 9000 rpm. New electronics known as “High Performance Dynamic Concept” push the limits by managing the car’s mechanical components and electronic controls. The car has a tremendous 280 kg of downforce at 124 mph courtesy of some serious aerodynamic tweaks. The front underside is faired-in completely and a new “Actiflow” system uses a diffuser and two fans in the boot to push air from under the car out two grilles next to the tail lights. In addition, winglets have been attached to the rear buttresses to increase downforce and synthetic jets added to control air flow and reduce drag. The car is outfitted with super slick tires wrapped over 19 x 11J wheels up front and 19 x 12J rims in back.

When considering the Ferrari 599XX you are really purchasing involvement in Ferrari’s development program. For roughly 1 million euros you get to participate in dedicated track events during 2010 and 2011. Most likely only a couple dozen of these gems will be available.