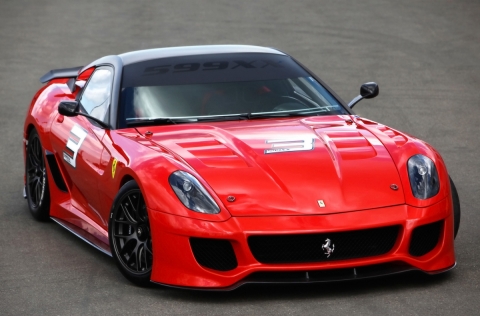 The Ferrari 599XX Prototype made its debut at the 2009 Geneva Motor Show and created quite a buzz. More details and photos are now available on this potential Enzo replacement. According to Ferrari, this concept car will soon emerge as a special limited production Ferrari 599 GTB Fiorano track variation for select customers to be used as a “technological laboratory” during 2010 and 2011. Unlike the development program-based Enzo, which is one of the most lusted after cars ever produced, the new 599XX will hold closer to the current aesthetic with some godzilla enhancements. The standard 599 GTB guts are incorporated but tuned to produce 700 hp and a redline of 9000 rpm. A Formula 1 style gear box with 60 ms shift times is incorporated along with paddle shifters.

The Ferrari 599XX prototype was put on a serious weight reduction plan with plenty of carbon fiber and composites used in as many places as possible. A carbon-ceramic brake system is utilized with carbon-fiber pads and smaller calipers that can provide the same efficiency with shorter braking distances. The brake discs are covered with carbon fiber “doughnuts” that assist with aerodynamics and cooling. Speaking of aerodynamics, special fins in the rear diffuser, double fans on the trunk and winglets on the rear buttress all help to increase downforce. In addition, synthetic jets are installed into the rear of the car to smooth air flow.

We’ll keep you posted as the Ferrari 599XX gets closer to being produced. For now, check out the image gallery to whet your appetite. And obviously, no numbers have been confirmed just yet, but look for “participation” in Ferrari’s development program, including special track events, to be somewhere north of $1 million.