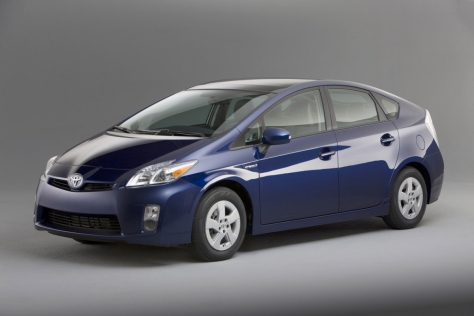 The 3rd generation Toyota Prius hybrid made it’s official debut today at the 2009 North American International Auto Show. This is not just a simple refresh but a solid effort both in technological advancement and visual refinement. The new Prius will get improved gas mileage (is that even possible?) now at a combined EPA rating of 50 miles per gallon. The engine has been upgraded to 1.8 liter with an output of 98 hp. Add in the hybrid drive system and the car has a net output of 134 hp.

The overall aesthetics and recognizability of the car stay true to the original Prius charm but some of the blandness has been peeled away to reveal a new silhouette that appears more performance oriented. The top of the roof has been moved 4 inches back, the front and rear corners are now sharp and crisp, the side character lines define the “glazed geometric shape” and when viewed from behind, the wider stance gives it a more solid gait.

The new 2010 Toyota Prius sports the world’s lowest drag coefficient of 0.25. This came about as a result of Toyota allotting more wind tunnel testing to the Prius than any other car in the history of the company. The previous model had a Cd of 0.26. This may seem like an inconsequential improvement but in the automotive world, each .01 coefficient of drag reduction is significant.

The Prius has a plethora of cool options available including LED headlamps, a radar based cruise control with lane departure detection, intelligent parking assistance, a backup monitor and Safety Connect, Toyota’s version of OnStar. However, the coolest by far is the solar roof which consists of photo-voltaic panels that power air recirculation. In turn, this reduces the load on the AC system. Pricing for the 2010 Toyota Prius has not been released yet but the vehicle will go on sale in late spring.