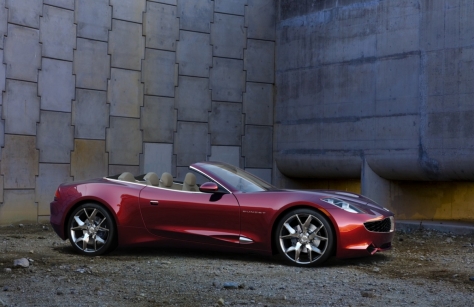 Fisker unveiled their hybrid hardtop convertible concept this week at the 2009 Detroit Auto Show. Not yet a household name, but gaining some serious notoriety, the company is an up-and-coming manufacturer of green sports cars. The Fisker Karma S concept is a four-seater with serious flair.

The convertible shares many similarities with the standard Karma but deletes two doors and provides a drop-top. There is a misconception that Fisker makes full-on electric cars and is a Tesla wanna-be but this is just not true. The car has it’s own niche of sorts with a mix of a 2.0-liter engine, generator and electric motors. The 4-cylinder GM EcoTec engine is turbocharged and good for 260 hp. But it’s the hybrid technology that sets it apart.

In Fisker’s own words: “”The open-air Fisker Karma S concept shares its aluminum spaceframe architecture and clean Q-DRIVE® powertrain with the Fisker Karma sedan. Designed and engineered by Quantum Technologies exclusively for Fisker Automotive, Q-DRIVE® provides 50 emission-free miles on a single charge to its lithium-ion battery pack, and up to 403hp from two electric.

The price has not been set for the Fisker Karma Sunset but if all things go according to plan, we should see it out on the streets starting in 2011.