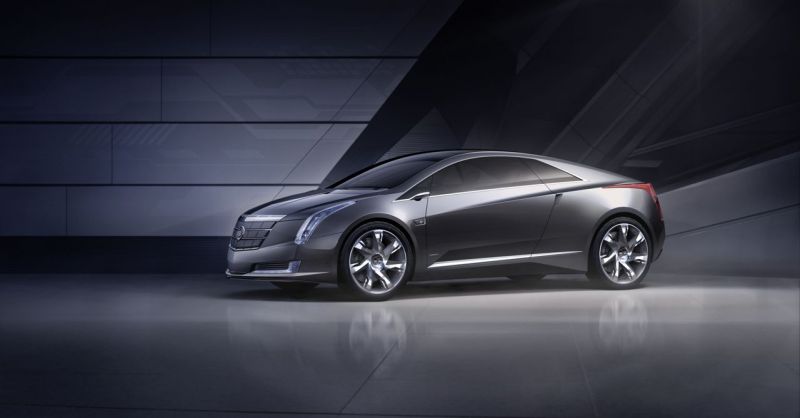 The “Cadillac of electric vehicles” is currently being previewed at the 2009 Detroit Auto Show. The quote comes from Bob Lutz during his unveiling of their new alternative energy coupe. The Cadillac Converj uses the same drivetrain as the Chevrolet Volt but puts the company’s upscale and more aggresive aesthethic into good use. The Converj is a plug-in that takes about 3 hours to fully charge on a 240 volt line and 8 hours on a 120 volt line.

When battery energy is drained, the Converj turns on its extended range mode, which relies on a flex-fuel engine. This is actually a power generator that provides a steady supply of electricity for hundreds of miles until refueling or recharging. This feature actually eliminates the “range anxiety” associated with electric-only vehicles with no reserve power. People still are nervous about not being able to rely on the nearest gas station.

In either electric or extended-range mode, the Cadillac Converj operates off of a full time electric drive unit which transfers energy from the battery or the electric-generator to propel the car foward. Amazingly, 273-lb.ft of torque is instantly available and a top speed 100 mph is attainable.

To increase range even further the mirrors have been removed in favor of rear-view cameras, the all-glass roof has built in solar panels, a full belly pan and reduced grill openings have been selected to prevent drag.

It has not been determined whether the Cadillac Converj Concept will move close to production, but with the Chevy Volt expected in 2011 it is likely, just not in its exact form. Who else but Cadillac would bring a car to market with staggered chrome 21 and 22 inch wheels.