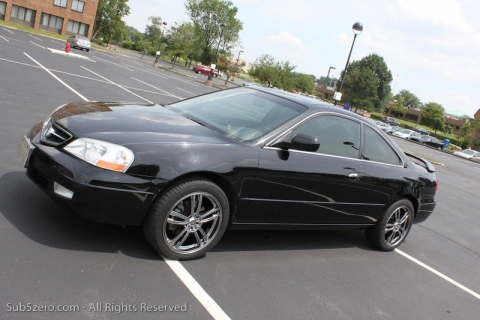 I’m happy to announce that this year we are putting together a project car at Sub5zero. The beneficiary is a Nighthawk Black Pearl 2001 Acura CL Type-S with 70,000 miles. The original MSRP on the vehicle was $30,300 (although it came into our possession used). The engine is a 3.2-liter SOHC V-6 with 260 horsepower mated to a five-speed SportShift automatic transmission. This is actually a terrific gearbox but the inability to access first gear when using the stick is a real drag. Dry-weight is listed at 3,510 pounds. The sprint from 0 to 60 mph takes just 6.4 seconds. Naturally, we think we can do better. How much better is debatable.

In fact, we started out with very high-aspirations for this project car, but honestly, due to the current economic climate, have decided to focus more on producing a daily driver with significantly enhanced performance than a monster track car as originally ill-conceived. Anyway, a luxury sport coupe isn’t necessarily the best platform to try and take on Evos and STIs. Anyone can slap tons of high-end parts on a car and call it a day, but I’m going to walk you through the thought processes on putting together a budget minded automobile with significant improvements over the base model. 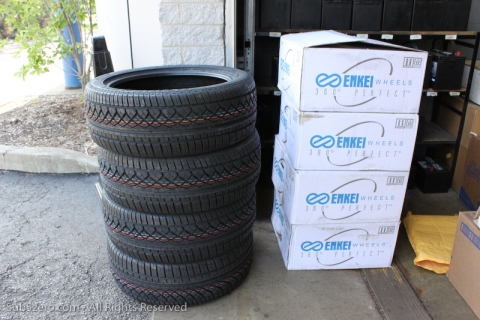 The first phase of our upgrade was a new wheel and tire package. The stock setup included a set of 215/50R17 Michelin MXM4 tires wrapped over 17 x 7.0 cast aluminum wheels. We swapped these out for a set of 225/45ZR18 Continental Extreme DWS tires and 18 x 7.5 Enkei KLAMP wheels in Hyper Black. Not only does this new setup provide a considerable boost to the overall appearance of the car, but durability and handling has improved dramatically. It’s not that the stock setup was all that bad. In fact, it was quite good. But given that it’s been over 8 years since this car was released, wheel and tire technology has markedly advanced. The average consumer (no offense) may not notice all of the subtle differences, but when you really push cars hard, the delta is night and day.

Let me talk a little about the consideration of tire and wheel size for a moment. There is a big push toward large rims with low profile tires sporting virtually non-existent sidewalls. On the track, if the wheels are racing derived and not luxury, and if the wheels are well constructed, this can provide much improved handling. However, for street driving this can be pure misery. Bent and chipped wheels as well as blown tires are commonplace and you can even loose traction and performance in the process. Admittedly, I had to do my best to fight the lure of 19″ and 20″ wheels and finally settle on 18s, which provide a nice balance between performance and everyday drivability. For the 2001 Acura CL, 19s would have ridden too harsh and 20s, although they’ll fit,  just don’t make any sense.

Once settling on 18″ wheels, there was another temptation that had to be fought, and that was the urge to go with a 40 (aspect ratio) sidewall for appearance. Instead, I opted for the 45 aspect ratio which better supports the manufacturer’s load balance ratings. And since the sidewall is the most sensitive part of the wheel, I decided to buck the trend and play it safe. Also, I wanted to keep the overall tire height as close to the original as possible, not only to ensure that the speedometer would track correctly but also that I would not lose any fuel economy.

Just for a little background information, Enkei has been around for over 58 years, getting off the ground first in Japan and then moving across Asia and later into Latin and North America. The company makes aluminum wheels for a variety of motorsports including WRC, Super GT Series, Formula One, Super Taikyu, Formula Nippon and Drifting. They also produce many OEM wheels for both automotive and motorcycle manufacturers such as General Motors, Toyota and Honda. There are a variety of testing specifications in the marketplace such as JWL and VIA strength standards, but Enkei decided that they needed to set the bar even higher by creating their own Spec-E measurements, a certification that all of their wheels must pass. As the trends in the marketplace have called for larger and larger wheels, Enkei has been able to safely meet the demands by significantly reducing weight to accommodate existing suspension systems. Currently, they have four different classes of wheels which include Race & Tuning, Performance, Luxury and Truck/SUV. All of their wheels come with a lifetime structural warranty. 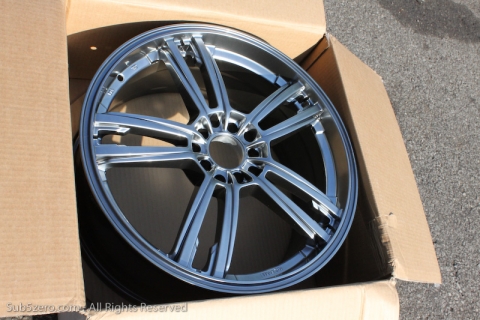 As I mentioned before, we obtained a set of Enkei 18 x 7.5 KLAMP wheels finished in Hyper Black. These wheels come from their Performance category and tip the scales at only 20.75 pounds each, much lighter than the smaller OEM stock rims we replaced. This reduction helps diminish unsprung weight, ultimately improving acceleration and handling. Of note, the 17-inch factory wheels took quite a beating from curbs as the spokes sat out a fair bit. The KLAMP wheels have a much better tuck and should hold up better to the demands of distracted and inattentive driving. 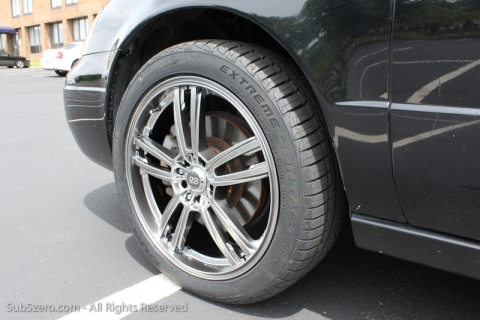 The finish on these wheels is outstanding and very different than anything else we’ve come across in the marketplace. Hyper Black is somewhat reminiscent of the black chrome phase that was popular about 10 years ago for emblems, grills and trim. Enkei has been able to settle on a color and finish that is visually stunning and won’t easily chip or peel. The appearance is much less flashy than outright chrome, but still retains the same kind of jazzy gleam without looking brash. The five spoke design, with lots of space between the alloy masts, allows plenty of room to showcase the underlying brake housings (although in our case, until we swap out the rusty factory brakes, it is more of a detraction). When the wheels are in motion the extra spacing provides a cool hollow look. Overall, the KLAMP wheels are sporty, durable and will give us a nice performance upgrade.

Continental is a German company that has been around since 1871 and is one of the five largest auto suppliers in the world, employing more than 140,000 people in 35 different countries and generating over $20 billion annually in sales. Over the years they have had many industry-leading innovations including the world’s first car tires with a patterned tread in 1904. The company’s tire brands include Continental Tire (naturally), General Tire, Uniroyal, Semperit, Barum, Gislaved, Mabor, Viking and Euzadi. So, now you have a little history… 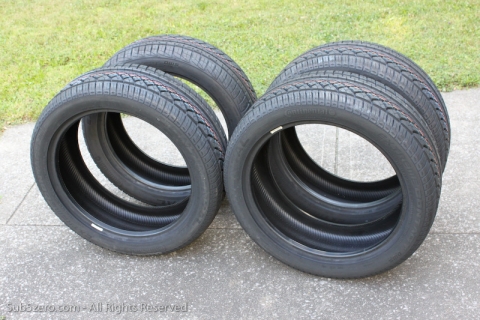 I had an opportunity to test the different flavors of ExtremeContact DW (Dry Wet) and DWS (Dry Wet Snow) at the company’s tire launch event/ride and drive back in March. Test driving these Conti tires against the competition, using identically set up vehicles, was a surefire way to evaluate their capabilities and limitations. My impression was favorable enough that I reached out to Continental to outfit our project car. As I said, I was thoroughly impressed prior to mounting these tires on the Acura CL-S, but being able to test the DWS on a car I am infinitely more familiar with has cemented my earlier opinion. 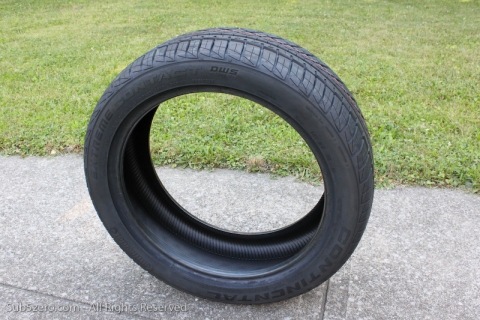 This past weekend, we were supposed to drive down to Chicago for Hot Import Nights but due to a massive rain storm and subsequent power outage, we lost too much ground to get there in time to adequately cover the event. So, what’s a guy to do in a rain storm when he has  high-performance cars on the mind? Go driving of course! This was a perfect opportunity to evaluate the Continental ExtremeContact DWS tires. The beads had a few days to seat and so it was time to push the car around a bit. Finding a freshly paved parking lot nearby (lucky for me), I was able to put the car through some aggressive driving and see the response in a somewhat controlled environment. I’m no Ken Block but it wasn’t exactly Driving Miss Daisy either, and I did have some concern about “the fuzz”.

Just as I experienced on the Continental Tire ExtremeContact Ride and Drive , traction was unbelievable, even with the constant downpour, large puddles (just because it was newly paved doesn’t mean anyone took the time to patch it) and the wet surface. The 2001 Acura CL-S is prone to excessive front wheel spin but there was none to speak of and no pesky warning light to provide a distraction. Cornering around light poles, landscaped islands and a few parked cars was effortless. The Acura has a bit of understeer due to its front-wheel drive setup, which can become a bit unruly at times, but the ExtremeContact DWS seemed to mitigate against that quirk quite well. Overall, compared to the previous set, braking was improved, the car handled and maneuvered better and there was no excessive tire noise or vibration. As far as treadwear and tire life, I’ll have to provide an update in a few months as these tires are still brand new.

The day before the rain storm, it was gorgeous, sunny and dry, and I took the opportunity to make a concerted effort to pay attention to the way the tires performed. Similar to the results in wet conditions, on dry pavement and the highway, performance was just as steady. The tires were quiet, consistent, provided good grip and strong reliability. During hard aggressive braking the tires didn’t appear to saturate with all the weight of the car shifting forward, and grip was fairly steady. My sprint times from 0 to 60 mph even improved by 3/10ths of a second! 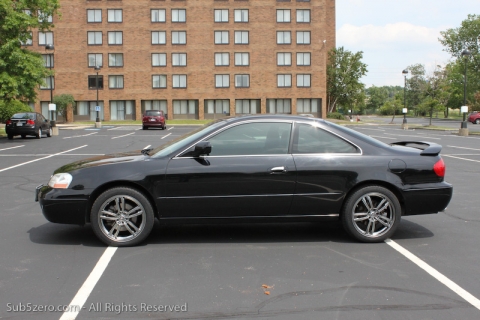 If you are planning on using either the Continental ExtremeContact DW or DWS to street race on dry roads, you probably want to consider something else like the Kumho Ecsta, Yokohama ADVAN or BFGoodrich g-Force T/A, which have more grip. But all these alternatives are only good fits for dry conditions, not rain or snow, and will wear out fairly quickly. Overall, the Continental ExtremeContact DWS tires are about the best rubber there is for all year round– daily as well as spirited driving. And unless you live in a few select areas like South Florida, SoCal, Arizona or Southern Texas, you will have to contend with snow at some point and it’s nice to know you’re covered.

A special thanks to Continental Tire and Enkei Wheels for their cooperation and generosity.

Next up is Phase II: Air Induction….